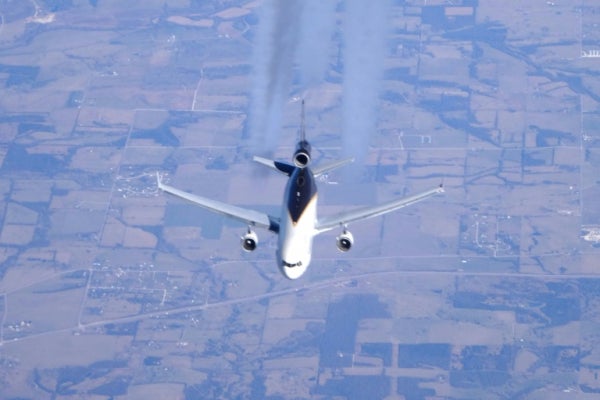 People who fly on airplanes while contagious can indeed get other people sick, but the risk is mainly to those seated next to them or in the adjacent row, according to a US study © Daniel Slim – AFP/File

People who fly on airplanes while contagious can indeed get other people sick, but the risk is mainly to those seated next to them or in the adjacent row, United States researchers said Monday.

The study in the Proceedings of the National Academy of Sciences (PNAS) is the first to quantify the odds of getting sick based on a passenger’s proximity to an infectious person.

Researchers studied 10 transcontinental flights and meticulously tracked passenger movements to estimate the likelihood of common respiratory infections like severe acute respiratory syndrome (SARS) and influenza, which are spread by tiny droplets in the air and on surfaces.

“Passengers seated within one row and within two seats laterally of the infected passenger had an 80 percent or greater probability of becoming infected,” said the study.

“For all other passengers, the probability of infection was less than three percent.”

Researchers also warned that infectious crew members could infect an average of 4.6 passengers per flight.

“Thus, it is imperative that flight attendants not fly when they are ill,” said the study led by researchers at Emory University and the Georgia Institute of Technology.

The good news is that public health guidelines typically go even further, urging those seated within two rows of an infected passenger to undergo surveillance for certain contagious diseases.

“The authors’ model argues that it requires you to be closer than previously reported — within one row and two seats of an infected passenger — as opposed to two rows regarding greatest risk of becoming ill on an airplane,” said Lenox Hill Hospital emergency physician Robert Glatter, who was not involved in the study.

“But the risk was significantly less if you were seated beyond two rows of an infected person who was coughing or sneezing. This runs counter to traditional thinking that if a person coughs or sneezes anywhere in the cabin, they will infect the entire plane.”

The study, which was conducted during flu season, reported only one person actively coughing, “which is often not the experience of the flying public,” Glatter added.

Swabs for respiratory viruses on tray tables and seatbelts also showed no trace of viruses, suggesting that most illness is spread by sneezing and coughing, not droplets that fall on surfaces or the ground.

Traveling while contagious is “an important public health concern” given that three billion passengers per year travel by air, said the report.

In 2014, a woman who was infected with Ebola flew from Cleveland to Dallas the night before she was hospitalized.

Her trip raised alarm about the prospect of a public health emergency, but luckily, no one was infected.

According to Michael Grosso, chair of pediatrics at Northwell Health’s Huntington Hospital in Huntington, New York, the study helps clarify what has long been rumored.

“I think everyone knows that travelers often experience the onset of a cold within a couple of days after flying and they naturally connect the two,” he said.

“The bad news is that travel websites have no option which says, ‘click here to find a seat at least three away from an influenza sufferer.'” MKH

‘Time-traveling’: Delayed plane flight departed in 2018, arrived at destination in 2017