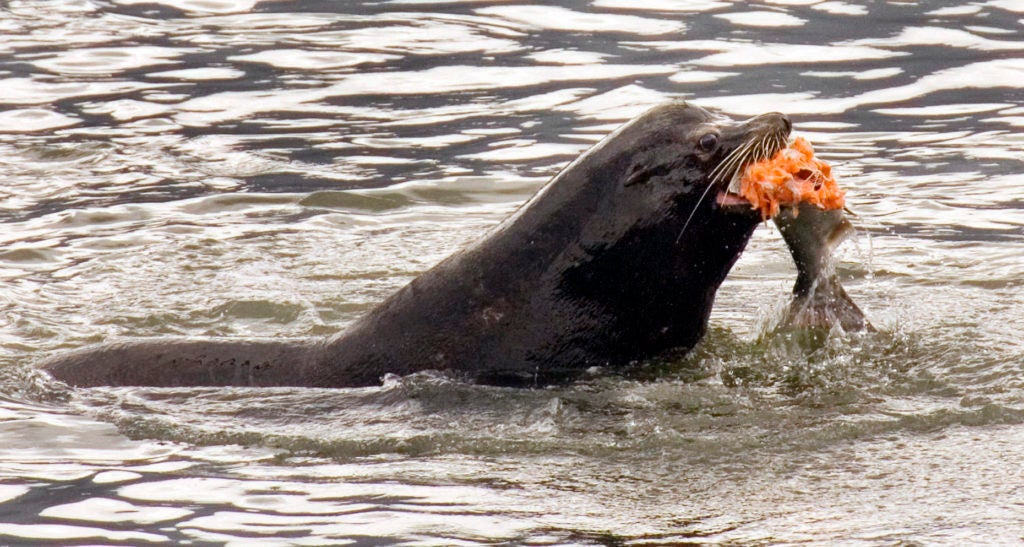 In this April 24, 2008 file photo, a sea lion eats a salmon in the Columbia River near Bonneville Dam in North Bonneville, Wash. Two species of fish listed as threatened under the Endangered Species Act are facing a growing challenge in Oregon from hungry sea lions. The federally protected California sea lions are traveling into the Columbia River and its tributaries to snack on fragile fish populations. After a decade killing the hungriest sea lions in one area, wildlife officials now want to expand the program. Image: AP/Don Ryan

NEWPORT, Ore. (AP) — The 700-pound sea lion blinked in the sun, sniffed the sea air and then lazily shifted to the edge of the truck bed and plopped onto the beach below.

Freed from the cage that carried him to the ocean, the massive marine mammal shuffled into the surf, looked left, looked right and then started swimming north as a collective groan went up from wildlife officials who watched from the shore.

After two days spent trapping and relocating the animal designated #U253, he was headed back to where he started — an Oregon river 130 miles (209 kilometers) from the Pacific Ocean that has become an all-you-can-eat fish buffet for hungry sea lions.

“I think he’s saying, ‘Ah, crap! I’ve got to swim all the way back?'” said Bryan Wright, an Oregon Department of Fish and Wildlife scientist.

It’s a frustrating dance between California sea lions and Oregon wildlife managers that’s become all too familiar in recent months. The state is trying to evict dozens of the federally protected animals from an inland river where they feast on salmon and steelhead that are listed under the Endangered Species Act.

The bizarre survival war has intensified recently as the sea lion population rebounds and fish populations decline in the Pacific Northwest.

The sea lions breed each summer off Southern California and northern Mexico, then the males cruise up the Pacific Coast to forage. Hunted for their thick fur, the mammals’ numbers dropped dramatically but have rebounded from 30,000 in the late 1960s to about 300,000 today due to the 1972 Marine Mammal Protection Act.

With their numbers growing, the dog-faced pinnipeds are venturing ever farther inland on the watery highways of the Columbia River and its tributaries in Oregon and Washington — and their appetite is having disastrous consequences, scientists say.

Less than 30 years ago, that number was more than 15,000, according to state numbers.

“We’re estimating that there’s a 90 percent probability that one of the populations in the Willamette River could go extinct if sea lion predation continues unchecked,” he said. “Of all the adults that are returning to the falls here, a quarter of them are getting eaten.”

Clements estimates the sea lions also are eating about 9 percent of the spring chinook salmon, a species prized by Native American tribes still allowed to fish for them.

Oregon wildlife managers say sea lions are beginning to move into even smaller tributaries where they had never been seen before and where some of the healthiest stocks of the threatened fish exist. The mammals also have been spotted in small rivers in Washington state that are home to fragile fish populations.

California sea lions are not listed under the Endangered Species Act, but killing them requires special authorization under the Marine Mammal Protection Act, which was changed to address the issue of fish predation.

Biologists this spring started trapping the sea lions in the Willamette River and releasing them at the coast. They also have applied with the federal government to kill the worst offenders to protect the fish runs.

Native tribes, which have fished for salmon and steelhead for generations, support limited sea lion kills because of the cultural value of the fish, said Doug Hatch, a senior fisheries scientist with the Columbia River Intertribal Fish Commission.

“You’re pitting this protected population that has been fully recovered against these Endangered Species Act-listed fish,” Hatch said. “We think it’s an easy choice.”

If U.S. officials grant the request, the trap-and-kill program would expand a similar and highly controversial effort on another major Pacific Northwest river. Oregon and Washington wildlife managers are allowed to kill up to 93 sea lions trapped each year at Bonneville Dam on the Columbia River under certain conditions.

In the past decade, the agency has removed 190 sea lions there. Of those, 168 were euthanized, seven died in accidents during trapping and 15 were placed in captivity, according to state data.

The Humane Society of the United States sued over the trap-and-kill program and may sue again if it’s allowed on the Willamette River, said Sharon Young, the organization’s field director for marine wildlife.

The animals are not the only problem facing wild winter steelhead and chinook salmon, she said.

Hydroelectric dams that block rivers, agricultural runoff, damage to spawning grounds and competition with hatchery-bred fish have all hurt the native species, Young said. And new sea lions will take the place of those that are killed, she added.

“It’s easier to say, ‘If I kill that sea lion, at least I keep him from eating that fish.’ But if you don’t deal with the cause of the problem, you’re not going to help the fish,” she said. “It’s like a treadmill of death. You kill one, and another one will come.”

While Oregon awaits word on the sea lions’ fate, wildlife managers are trapping them and hauling them to the ocean, which can sometimes seem futile.

Five days after his 2 ½-hour drive to the Oregon coast, #U253 was back at Willamette Falls, hungry for more fish. CC