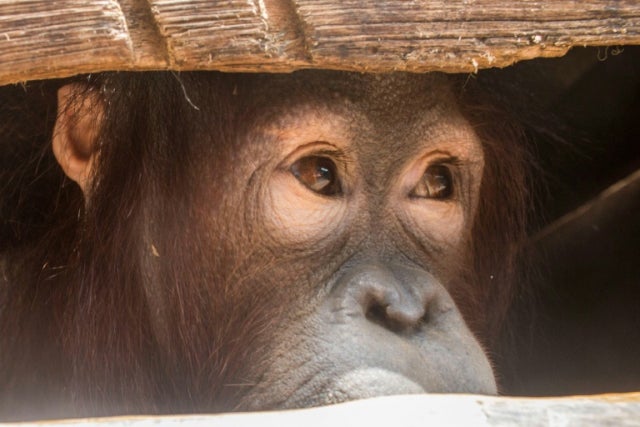 Joy the orangutan looking out from its cage after being rescued by environmentalists and local officials from villagers who had kept Joy as a house pet in Indonesia’s West Kalimantan province. Image: International Animal Rescue via AFP

Young orangutan Utu clings to one of his rescuers as he is freed from the tiny wooden cage that has been home for five years.

The tiny primate, covered in fuzzy auburn hair, is one of three Bornean orangutans saved in Indonesia over the past two weeks.

Environmentalists and local officials rescued Utu and another youngster, Joy, from tiny 1.5 by one metre (five by three feet) cages where they were kept as house pets in West Kalimantan on the island of Borneo.

A third orangutan named Tomang was moved from a village in the same province where he had been raiding fruit trees, angering local villagers.

Joy and Utu will now spend years learning to fend for themselves before being released into the wild, while Tomang has been set free into Gunung Palung National Park.

The rescues are a rare spot of bright news for the critically endangered species, after a string of fatal attacks on the great apes that have been blamed on farmers and hunters.

Four Indonesian men were arrested over the killing of an orangutan shot some 130 times with an air rifle in February.

Borneo police have also arrested two rubber plantation workers and accused them of shooting an orangutan multiple times before decapitating it.

Plantation workers and villagers are sometimes known to attack an animal that they see as a pest, while poachers also capture them to sell as pets.

A viral video of an orangutan puffing on a cigarette flicked into its zoo enclosure by a visitor this month highlighted Indonesia’s abysmal record of animal protection.

Conservation workers said rescues like those of Joy and Utu were doomed to be repeated unless forest clearing was tackled.

“We need to work with all stakeholders, not just citizens and governments, but also companies that have plantation land in or around orangutan habitat,” said Karmele L. Sanchez, programme director for International Animal Rescue. CC