For some, like the elderly, a change in China’s seasons becomes a life-and-death situation 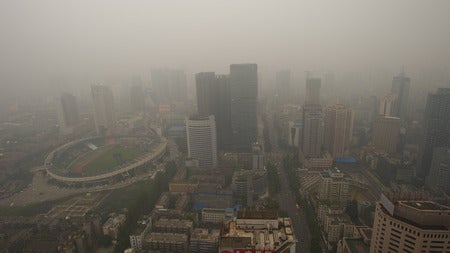 China’s battle for blue skies still is yet to be won, despite the country’s leaders’ efforts to tackle its nationwide problem on pollution. For some people, the coming of winter means the celebration of Christmas or endless snowball fights and ice skating. But for 79-year-old Yan Qijao of Xi’an of Shaanxi province, winters are for bouts of severe asthma and hospitalization for respiratory failure.

“Every winter when the air quality plummets, I have to be admitted to hospital,” Yan said in a report by the South China Morning Post yesterday. “When the weather grows warmer and the smog disperse, I get well again.”

It is why Yan loves the spring season, when she can enjoy the light blue skies and the warmth of the sun, instead of being confined to the hospital bed. Yan’s daughter, Grace Li, said that her mother was “dancing and walking everyday” during the summer months unlike during the coldest months of the year.

“In winter, she’s a totally different person,” her daughter said. “We have to prepare two oxygen bottles at her home and ensure there’s adequate supplies of medicine for her.”

Xia Qing, former deputy head of the Chinese Research Academy of Environmental Sciences said that what the Chinese people want now is not numbers (economic growth), but an improvement in quality of life: “China took the wrong road in the past years by putting too much stress on economic development and sacrificing our development.”

The Fenwi Plain where the city of Xi’an sits was considered by the Chinese government last month as a battlefield in the fight against pollution, the report stated. For Chinese president Xi Jinping, a clean environment is one of his ambitious goals to achieve by the year 2020.

But for elders like Yan, however, waiting for another two years to see whether the smog problem gets better or not would seem impractical. In cases of asthmatic people like her, the better option would be to relocate to another city, with Yan considering the renting of an apartment next year on Hainan island, which is known for its good air quality.

Yan may be recovering now from her respiratory failure last winter, but she still has to take medication and oxygen 1.5 hours a day. At 79-years-old, prevention is better than cure. Cody Cepeda/JB