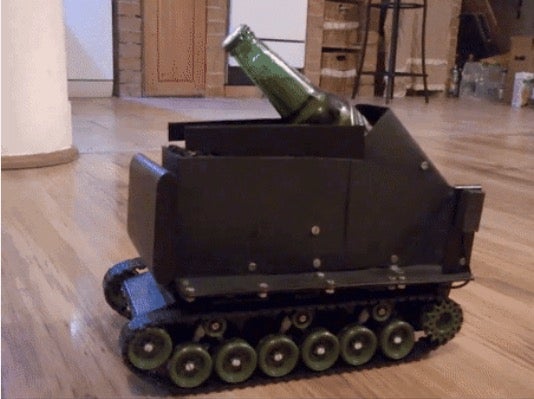 A Hungarian developer made the most of Alexa’s voice command feature by rigging a toy tank to bring him beer on command.

Balázs Simon from Szeged, Hungary put together a remote controlled “tank” and rigged it to Amazon’s cloud-based voice service Alexa. Through Alexa, the WalaBeer tank could be ordered to bring over beer using voice commands only.

In its undeployed state, the WalaBeer tank looks like a boxy armored personnel carrier. When deployed, panels at the top pop open, and a bottle of beer tilts upwards on a crane system. It looks like a missile tank about to launch its payload.

Simon also created a “follow mode” so that the WalaBeer tank could tail him and keep a bottle of the good stuff at arm’s reach. It appears it can also maintain a respectable distance from its master, so as not to bump into him.

To make all of this happen, Simon also used a Raspberry Pi mini computer and a Walabot 3D image sensor. This allows the WalaBeer tank to see where it’s going, locate its target even through walls, and maneuver to where a man can reach down and pluck the beer bottle.

Simon uploaded his schematics and provided a full tutorial on the developer sharing site Hackster.io to allow other developers to build on what he has accomplished. JB