Defunct Chinese space lab plunges back to Earth over Pacific 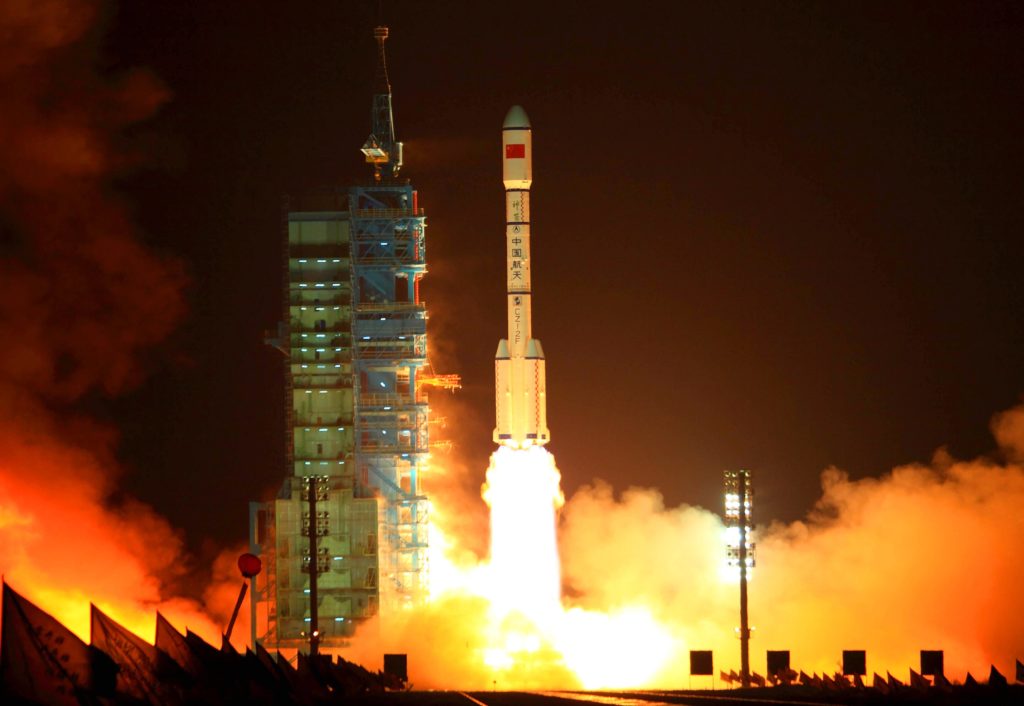 This file picture taken on September 29, 2011 shows China’s Long March 2F rocket carrying the Tiangong-1 module, or “Heavenly Palace”, blasting off from the Jiuquan launch centre in Gansu province. A defunct Chinese space lab plunged through Earth’s atmosphere on April 2, 2018, breaking apart as it headed towards a watery grave in the South Pacific, Beijing said. / AFP PHOTO / – / China OUT

A defunct Chinese space lab broke apart as it hurtled through Earth’s atmosphere on Monday, and plunged towards a watery grave in the South Pacific, Chinese officials said.

There was no immediate confirmation of the final resting place of any remaining debris, although the South Pacific is largely empty.

Space officials had promised the atmospheric disintegration would offer a “splendid” show akin to a meteor shower.

But the remote location likely deprived stargazers of a spectacle of fireballs falling from the sky.

Jonathan McDowell, an astronomer at the Harvard-Smithsonian Center for Astrophysics, said the module zoomed over Pyongyang and the Japanese city of Kyoto during daylight hours, reducing the odds of seeing it before it hit the Pacific.

“It would have been fun for people to see it, but there will be other reentries,” McDowell told AFP. “The good thing is that it doesn’t cause any damage when it comes down and that’s what we like.”

Space officials had warned that knowing the exact location of the re-entry would not be possible until shortly before it happened.

The difficulties seemed to wrong-foot Chinese space scientists – just moments before announcing the craft would come down over the Pacific, they said it would make its re-entry over Sao Paulo, and head towards the Atlantic Ocean.

The United States military’s network of radars and sensors also confirmed the Tiangong-1 had re-entered over the Pacific, but a minute later than the Chinese estimate, according to a statement by the Joint Force Space Component Command (JFSCC).

The JFSCC said it confirmed the re-entry in coordination with Australia, Canada, Britain, France, Germany, Italy, Japan, and South Korea.

McDowell said China’s space agency’s initial estimate for re-entry was off because it “guessed wrong” about the time that the space lab would come down from its orbital path.

“That’s all that happened,” he said, as models used by experts to estimate a re-entry point pick the middle time in a return window.

The European Space Agency (ESA) had indicated earlier that the Tiangong-1 was likely to break up over water, which covers most of the planet’s surface.

It described the probability of someone being hit by a piece of debris from Tiangong-1 as “10 million times smaller than the yearly chance of being hit by lightning”.

Tiangong-1 – or “Heavenly Palace” – was placed in orbit in September 2011, an important step in China’s efforts towards building its own space station.

The module – which was used to practice complicated manual and automatic docking techniques – was originally intended to be used for just two years, but ended up serving considerably longer.

Tiangong-1 had been slated for a controlled re-entry, but ceased functioning in March 2016. Space enthusiasts have been bracing for its return ever since.

The ESA has said that ground controllers were no longer able to command Tiangong-1 to fire its on-board engines, which could have been used to determine where it re-entered Earth’s atmosphere.

In contrast, Russia brought down its massive Mir space station through a controlled re-entry over the Pacific Ocean in 2001.

A Chinese spaceflight engineer denied earlier this year that the lab was out of control.

Chinese media have downplayed comments by the ESA and others that the country’s engineers have lost control of the lab, with reports saying that the idea it is “out of control” is an invention of foreign media.

Beijing began its manned spaceflight program in 1990 after buying Russian technology that enabled it to become the third country with the ability to launch humans into space, following the former Soviet Union and the US.

China sent another space lab, Tiangong-2, into orbit in September 2016 as a stepping stone to its goal of having a crewed space station by 2022.

It also plans to send a manned mission to the moon in the future.    /kga