The center of the Milky Way is teeming with black holes 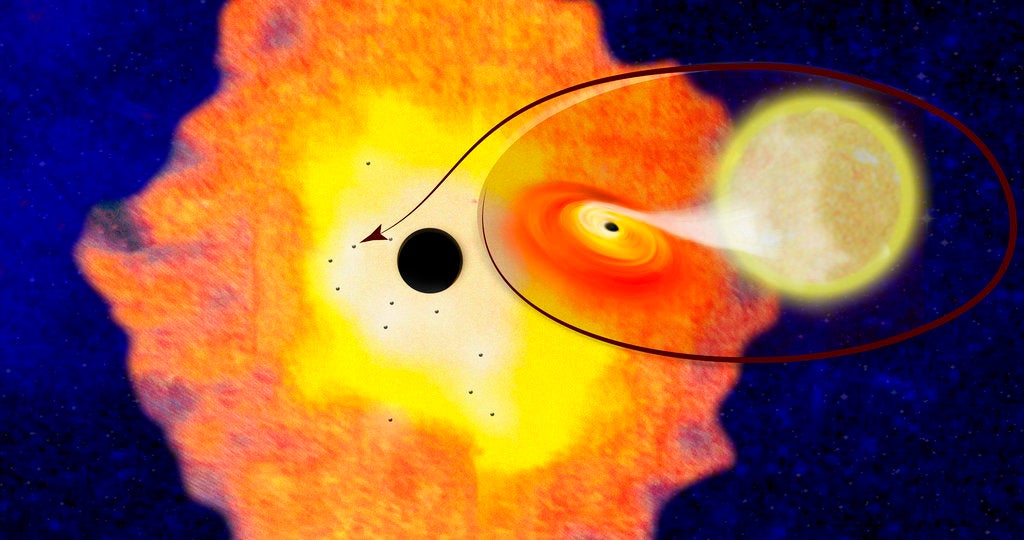 This illustration provided by Columbia University shows the supermassive black hole Sagittarius A, located at the center of the Milky Way Galaxy, surrounded by a cloud of dust and gas within which are 12 smaller black holes, and a closeup of one of the systems. The enlarged section illustrates how the 12 black holes are each accompanied by a star in a binary orbit. Gasses from the partner star are pulled into a disk around the black hole. (Columbia University via AP)

WASHINGTON — The center of our galaxy is teeming with black holes, sort of like a Times Square for strange super gravity objects, astronomers discovered.

For decades, scientists theorized that circling in the center of galaxies, including ours, were lots of stellar black holes , collapsed giant stars where the gravity is so strong even light doesn’t get out. But they hadn’t seen evidence of them in the Milky Way core until now.

Astronomers poring over old x-ray observations have found signs of a dozen black holes in the inner circle of the Milky Way. And since most black holes can’t even be spotted that way, they calculate that there are likely thousands of them there. They estimate it could be about 10,000, maybe more, according to a study in Wednesday’s journal Nature .

“There’s lots of action going on there,” said study lead author Chuck Hailey, a Columbia University astrophysicist. “The galactic center is a strange place. That’s why people like to study it.”

The stellar black holes are in addition to — and essentially circling — the already known supermassive black hole, called Sagittarius A , that’s parked at the center of the Milky Way.

In the rest of the massive Milky Way, scientists have only spotted about five dozen black holes so far, Hailey said.

The newly discovered black holes are within about 19.2 trillion miles (30.9 trillion kilometers) of the supermassive black hole at the center. So there’s still a lot of empty space and gas amid all those black holes. But if you took the equivalent space around Earth there would be zero black holes, not thousands, Hailey said.

Earth is in spiral arm around 3,000 light years away from the center of the galaxy. (A light year is 5.9 trillion miles, or 9.5 trillion kilometers.)

Harvard astronomer Avi Loeb, who wasn’t part of the study, praised the finding as exciting but confirming what scientists had long expected.

The newly confirmed black holes are about 10 times the mass of our sun, as opposed to the central supermassive black hole, which has the mass of 4 million suns. Also the ones spotted are only the type that are binary , where a black hole has partnered with another star and together they emit large amount of x-rays as the star’s outer layer is sucked into the black hole. Those x-rays are what astronomers observe.

But binary black hole systems are likely only 5 percent of all black holes, so that means there are really thousands of them, Hailey said.

There are good reasons the Milky Way’s black holes tend to be in the center of the galaxy, Hailey said.

First, their mass tends to pull them to the center. But mostly the center of the galaxy is the perfect “hot house” for black hole formation, with lots of dust and gas.

Hailey said it is “sort of like a little farm where you have all the right conditions to produce and hold on to a large number of black holes.”   /muf