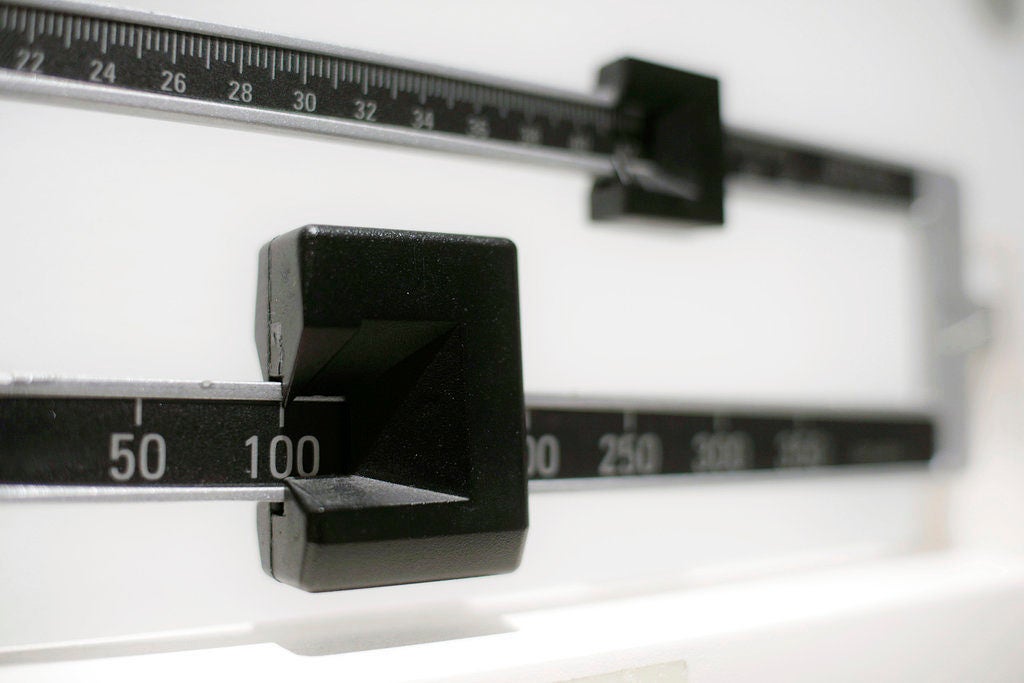 This Tuesday, April 3, 2018 photo shows a closeup of a beam scale in New York. New research released on Wednesday, April 4, 2018 suggests there’s a critical window for overweight kids to get to a healthy level. Those who shed their extra pounds by age 13 had the same risk of developing diabetes in adulthood as others who had never weighed too much, a large study of Danish men found. (AP Photo/Patrick Sison)

There may be a critical window for overweight kids to get to a healthy level. Those who shed their extra pounds by age 13 had the same risk of developing diabetes in adulthood as others who had never weighed too much, a large study of Danish men found.

Diabetes can develop when the body can’t properly use insulin to turn food into energy. Being overweight at any age raises the chances of the most common form, Type 2. But it’s not known whether or how much that risk is reduced if people lose weight, and when.

“This study seems to suggest that overweight in adolescence is particularly harmful” and that reversing it by then can do a lot of good, said Dr. Stephen Daniels, pediatrics chief at the University of Colorado School of Medicine in Denver.

He had no role in the study, which was led by researchers at the University of Copenhagen, sponsored by the European Union, and published Wednesday by the New England Journal of Medicine.

It involved 62,565 men in Denmark, where mandatory school and military service exams enabled tracking their health for decades. Heights and weights were measured when they were 7, 13, and between 17 and 26. National health records were used to see how many developed diabetes in adulthood.

Men who were overweight at age 7 but weren’t by age 13 had similar odds of diabetes later in life as men who’d never been overweight.

Those who were overweight only at 13, or only at 7 and 13, had a lower risk than those who stayed overweight throughout young adulthood but a higher risk than men who’d never been overweight.

“They are hopeful results” that show there are benefits if parents can help chubby kids “grow into a healthy weight,” said Steven Gortmaker, a childhood obesity researcher at the Harvard School of Public Health. “If you can slow the rise of obesity in very young children you have a chance of really preventing future cases of diabetes.”

The muscles and organs don’t use insulin as well after then, so it takes more to get the same job done, he said.

The study had many limitations — it was only in men, and there was no information on what they weighed in adulthood, when the diabetes developed.

It was a different time and place — decades ago in Denmark, only 5 percent to 8 percent of these men had been overweight as children or teens. Today in the United States, about 35 percent of kids are, and more than 23 percent are worldwide.     /muf