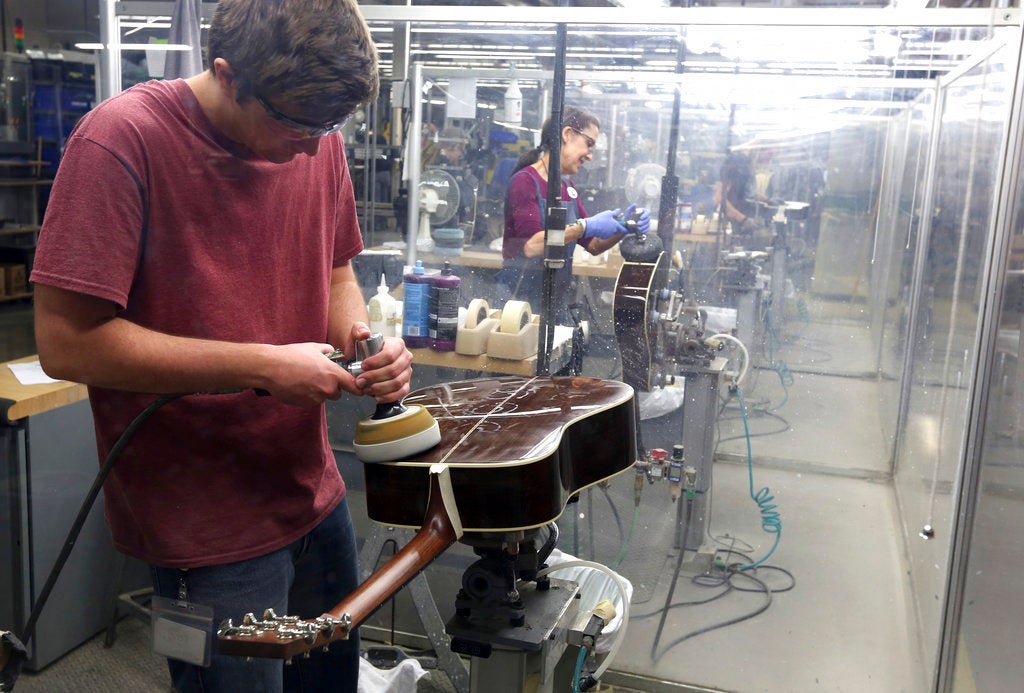 In this March 23, 2018 photo, workers buff guitars at C. F. Martin and Co., in Nazareth, Pa. Fearful that parts of Africa and Asia were losing their rosewood forests to illegal loggers, governments in 2016 banded together to slap international trade regulations on hundreds of species of the trees. Among the hardest hit has been the music industry, many who depend on rosewood for parts of their guitars, clarinets and oboes. (AP Photo/Jacqueline Larma)

CONCORD, N.H. — An international crackdown on illegal logging in tropical forests has ensnared the makers of some guitars and other musical instruments, whose top-end products require small amounts of rosewood, a material prized for its rich, multicolored grain and resonant sound.

Since new trade rules took effect in 2017, guitar makers have complained about long delays in getting permits to import rosewood and export finished instruments that contain it. Warehouses have filled with unsold instruments, and a bagpipe maker in New Hampshire went so far as to ask the governor to intervene after a permit application was lost.

“I’m so annoyed. I’m so distraught by this,” said Chris Martin, chairman and CEO of C.F. Martin and Co., which uses rosewood in 200 models of acoustic guitar, some played by Eric Clapton, Ed Sheeran, Sting and other stars. The company’s logistics staff estimates it spends 40 percent of its time dealing with the new regulations.

Fearful that Africa and Asia were losing rosewood forests, governments adopted the rules to stem the flow of smuggled rosewood to China’s luxury furniture manufacturers. But the restrictions have also hurt companies that use relatively tiny amounts of the wood in guitars, clarinets and oboes.

Months after the regulations were adopted, acoustic guitar exports from the U.S. fell by about 28 percent, and electric guitar exports declined 23 percent, according to the Music Trades magazine, an industry publication. Music retailers reported losing $60 million.

At Martin’s Pennsylvania-based company, many transactions are stalled: “We have orders for the guitars. We have customers. The customers have the money to pay for them, and we can’t ship them because the paperwork is stuck somewhere,” he said. 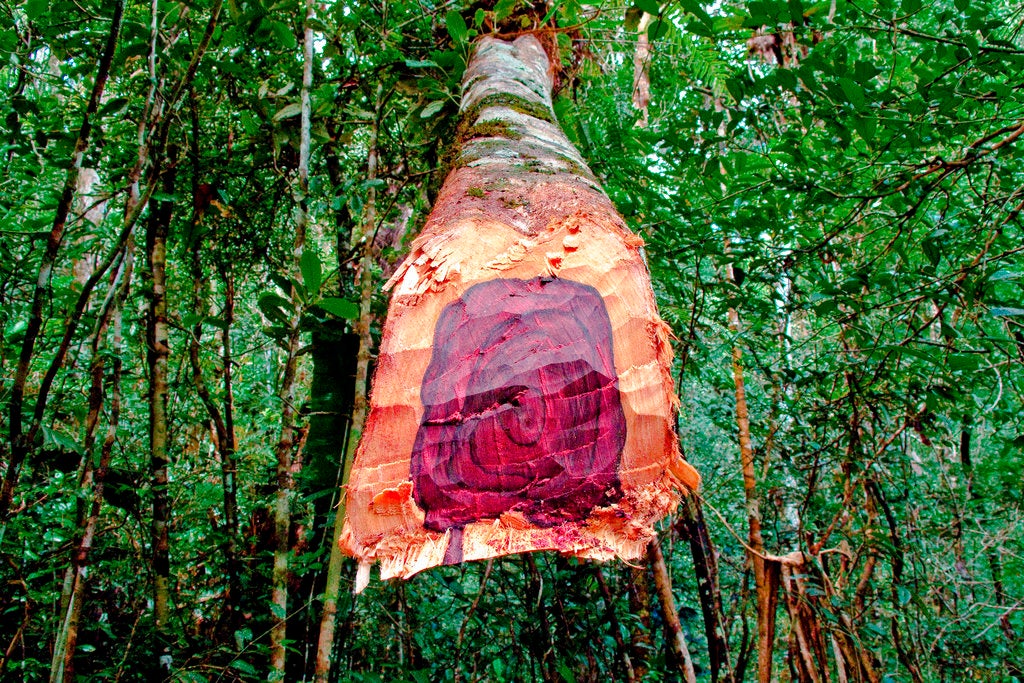 The guitar industry’s frustration is focused on the United Nation’s Convention on International Trade in Endangered Species of Wild Fauna and Flora, or CITES , which is responsible for combating wildlife smuggling. The agency has tangled in the past with instrument makers, mostly over restrictions on ivory, tortoiseshell and whale bone.

Agency officials previously placed trade limits on only a few rosewood species, such as Brazilian rosewood, which is especially precious. But the 2016 trade rules covered up to 300 species of the rosewood family known as Dalbergia. The new regulations also required permits for products made from the wood, including guitars, violins, bagpipes and xylophones. Many companies that had never needed permits had only three months to comply.

“It was a steep learning curve for these companies,” said Timothy Van Norman, chief of the permit-granting branch of the U.S. Fish and Wildlife Service , which saw its permit applications double to 40,000 in 2017 mostly from rosewood. Bigger guitar companies with more sophisticated distribution systems were probably quicker to adapt than smaller companies or individuals making a limited number of instruments. “For them, it probably came out of the blue.”

Taylor Guitars , based in El Cajon, California, reported losing tens of thousands of dollars from months-long delays and confusion surrounding its shipments to some 30 countries in the world.

Governments in Africa and Latin America proposed the regulations to combat increased rosewood smuggling over the past decade that they said had endangered the species, which is also known for its fragrance, a sweet floral aroma that gives the wood its name.

Much of the smuggling was orchestrated by criminal gangs that took advantage of lax rules and widespread corruption to strip away forest in Southeast Asia, Central America and West Africa. The illegal logging also sparked regional conflicts, contributed to desertification and destroyed a key food source for bees, butterflies and other insects.

The United Nations describes the rosewood trade as the world’s costliest wildlife crime, with seizures totaling more than almost all other species combined. Between 2005 and 2015, 10,000 metric tons of protected rosewood was seized.

Most of that wood was headed to China, where rosewood imports jumped 2,000 percent from 2005 to 2014, according to the conservation group Forest Trends . Much of the material went into the making of reproduction hongmu furniture from the Ming and Qing dynasties, a style popular with affluent Chinese.

“These countries didn’t want to wait until their tree species are on the verge of extinction before acting to control the trade. They saw what happened in Asia. There is almost nothing left,” said Susanne Breitkopf, forest campaign policy manager of the nonprofit Environmental Investigation Agency .

A spokesman for China’s forest administration did not respond to repeated emails and phone calls from The Associated Press.

Jiang Hengfu, secretary general of Traditional Furniture Specialty Committee, which is part of the China National Furniture Association, said he did not know much about the industry’s role in the destruction of rosewood forests or the use of illegal wood in furniture. But he acknowledged that trade restrictions and increased environmental awareness in China had increased rosewood prices and would force furniture companies to become more innovative.

Meanwhile, guitar makers find themselves defending the crackdown and highlighting their sustainability efforts while also lobbying to exclude musical instruments from the regulations — a debate to take place when CITES meets in 2019.

Instrument makers such as Martin argue that they use a fraction as much rosewood as Chinese furniture makers — about 50 cubic meters each a year compared with nearly 2 million cubic meters. And, the instrument makers say, they get most of it from sustainable plantations in India.

CITES officials say they are open to considering exemptions for certain types of instruments but fear broad exemptions would let smugglers game the system.

“It is something that needs to be revisited and how far do we need to go with the regulation to make sure there are not loopholes,” the outgoing CITES Secretary-General John Scanlon told the AP.

The cost and hassle of the new regulations have caused some guitar makers to shift away from rosewood. Martin stopped using it on most guitars produced in Mexico and the models made in the U.S. that cost less than $3,000. Taylor has rolled out several models without rosewood for overseas customers.

But the companies have no plans to abandon rosewood altogether.

“There are other woods that work,” Martin said. But guitar builders and players know there is “something very special” about rosewood’s depth and richness of sound. “No one has found … a wood that works better.”   /muf