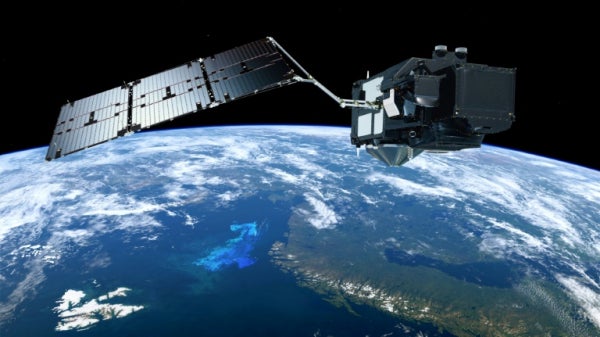 A composite of images of the Sentinel-3 satellite of the European Space Agency’s Copernicus programme, which will monitor Earth’s oceans. © EUROPEAN SPACE AGENCY/AFP

Europe is set to launch a satellite on Wednesday to keep a close eye on Earth’s oceans, under siege from pollution and damage caused by humans.

Dubbed Sentinel-3B, the orbiter will become the seventh to join the multi-billion-euro Copernicus Earth-monitoring satellite constellation since April 2014.

With its twin Sentinel-3A launched in February 2016, the workhorse will provide data within three hours of it being captured, 24 hours a day, 365 days a year, according to the European Space Agency (ESA).

Sentinels-3A and 3B will mirror each other on opposite sides of our planet at an altitude of just over 800 kilometers (497 miles), on the lookout for further harm to the ocean or signs of recovery.

“The Sentinel-3 mission is essential for applications for ocean and coastal monitoring” — including changes in sea level and surface temperature, pollution, sea ice extent and thickness, and coastal vegetation, said an ESA statement.

It will also monitor the height of rivers and lakes, and keep an eye on wildfires.

About the size of a small car and weighing 1,250 kilograms — Sentinel-3B will be hoisted into space by a Russian Rockot launcher from the Plesetsk Cosmodrome in the country’s north.

Liftoff is scheduled for 1757 GMT on Wednesday.

Fitted out with a range of state-of-the-art instruments, “Sentinel-3 is arguably the most comprehensive of all the Sentinel Missions,” says the ESA.

The Copernicus project, funded by the European Union and ESA, is named for the 16th-century Polish astronomer who determined that the Earth orbited the Sun, and not the other way round as convention had it at the time.

It claims to be the largest environmental-monitoring programme in the world, providing data for free to anyone who wants it.

Other satellites in the constellation are dedicated to monitoring Earth’s atmosphere, forest cover, and land and water pollution.

There is some uncertainty over the impact of Brexit on the project in which Britain is invested.

Britain’s EU-linked participation in Copernicus should officially end when it leaves the bloc, though its role can be renegotiated.

London has said it wants to remain part of ESA, which is autonomous and includes non-EU members.

United Kingdom-based companies hold contracts worth tens of millions of euros from ESA to supply hardware for Copernicus as well as the Galileo satellite navigation project — a rival to America’s GPS. MKH