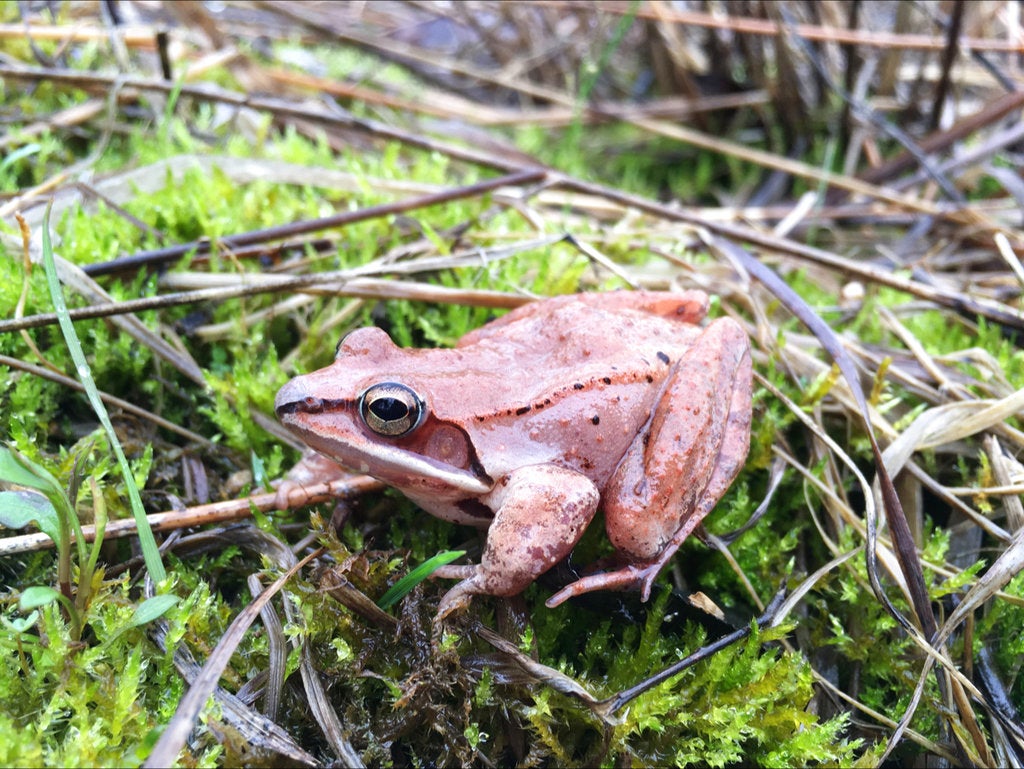 This April 24, 2018 photo provided by Clara do Amaral shows a wood frog in Ohio. In a report released on Tuesday, May 1, 2018, scientists have found that wood frogs, which don’t urinate in the winter, recycle urea _ the main waste in urine _ into useful nitrogen which keeps the small animals alive as they hibernate and freeze, inside and out. It doesn’t warm them up, but protects cells and tissues, even as the amphibian’s heart, brain and bloodstream stop. (Clara do Amaral, Mount St. Joseph University via AP)

WASHINGTON — If you’ve ever been unable to find a bathroom in a moment of need, you know the gotta-go feeling. That’s nothing compared to the wood frog, which doesn’t urinate all winter.

In Alaska, wood frogs go eight months without peeing. And scientists have now figured out how they do it, or more accurately, how they survive without doing it.

Recycling urea — the main waste in urine — into useful nitrogen keeps the small frogs alive as they hibernate and freeze, inside and out. It doesn’t warm them up. Instead, urea protects cells and tissues, even as the critter’s heart, brain and bloodstream stop.

The frogs can do it because special microbes in their guts recycle the urea, according to a new study in Tuesday’s journal Proceedings of the Royal Society B.

Some call the frog pee a type of antifreeze, but study co-author Jon Costanzo, a zoologist at Miami University in Ohio, bristles at that term.

“Their eyes are white. Their skin is frosty. They’re like little rocks. They’re frozen,” Costanzo said.

If the frogs were human, they would be called dead, Costanzo said. But once the temperatures warm, they come back to life.

Wood frogs live all over America and in the Arctic Circle. Some Alaskan wood frogs get as cold as zero degrees (minus 18 degrees Celsius), he said.

Other animals don’t urinate when they hibernate, but mammals don’t do the big freeze quite like wood frogs, which wake up in still-cold February to mate, he said.

Costanzo and colleagues looked at the bacteria that live in frog guts. Many are also in animals that hibernate. One type of bacteria soars in the winter but can’t be seen in active frogs. It’s called Pseudomonas and it thrives in the cold.

C. Richard Tracy, a biologist at the University of Nevada, Reno, who wasn’t part of the study, said he found the study’s conclusions sound but the methods simplistic.

Finding out what was happening inside the creatures wasn’t easy. Costanzo’s team captured wood frogs, which blend in well with the soil and leaves, during active times and then turn them into frog-sicles under controlled conditions.

“This is stress that would definitely kill any mammal,” Costanzo says. “People are fascinated by bear hibernation, but in my book any animal that allows itself to freeze solid and is able to recover from it and walk away and thus go about its business like nothing happened, to me that’s about as cool as it gets.”        /muf