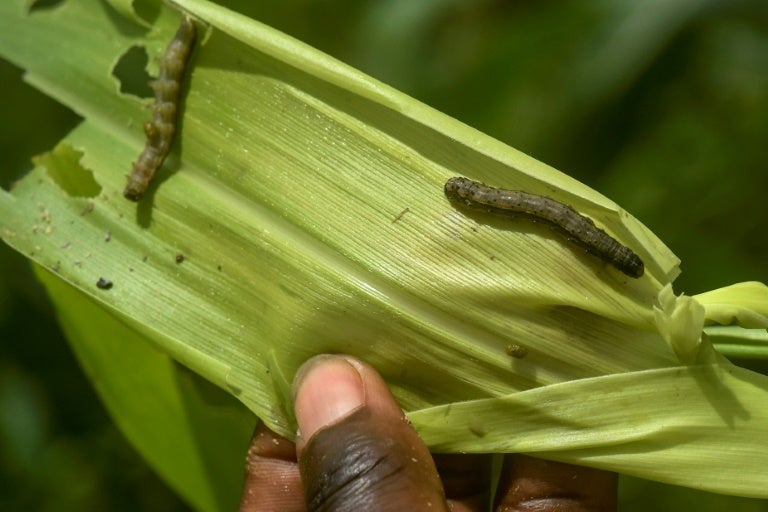 The very hungry caterpillar: Maize, a vital crop for Africa, is at threat from the fall armyworm, an invasive species native to the Americas. Image: Simon Maina/AFP

On farms across Africa, a seemingly innocuous brown and beige caterpillar is waging a silent war, devastating rural incomes and posing a major threat to the continent’s food supply.

In just two years, the so-called fall armyworm has colonized three-quarters of Africa, according to the British-based Center for Agriculture and Biosciences International (CABI).

Its favorite food is maize, also known as corn, the staple on which over 200 million smallholder farming families depend for their livelihoods.

The fall armyworm is believed to have made its bridgehead in West Africa after being accidentally brought in from South America, its native home, by sea or air cargo.

It was first detected in Africa in 2016.

“Since then, it has very rapidly spread across the entire continent. It’s reportedly now causing damage in more than 40 countries,” said Boddupalli Prasanna, an expert at the International Maize and Wheat Improvement Centre (CIMMYT) in Mexico.

The larval, or caterpillar, armyworm is perfectly adapted for destruction.

Growing up to about 50 millimeters (two inches), it nestles in the leaves around the head of maize.

The critter then attacks methodically, leaving behind shredded leaves and chewed or hollowed ears of corn.

In one Kenyan county visited by experts last year, 30 percent of the crop was lost.

The impact on farmers and on households can be huge.

Wycliffe Ngoda, a 64-year-old farmer from near Kisumu, in western Kenya, said he lost nearly a quarter of his income last year in an armyworm outbreak, and the price of a two-kilo (4.4-pound) bag of maize doubled in his area.

“The attack was very fast and furious. In a short while, huge swathes of (crops) had been eaten,” he said.

“I lost 50 percent of my crop, others up to 70 percent,” he said. “This is how we were introduced to armyworm: very rudely.”

The life cycle of Spodoptera frugiperda is only about six weeks, but it packs an outsized punch.

In the final two weeks, the armyworm caterpillar metamorphoses into a moth able to cover up to 100 kilometers (60 miles) in a night.

Each female can lay up to 1,500 eggs, ensuring an exponential growth of foot soldiers with a remarkable ability to adapt.

Maize is the armyworm’s favourite food, but the caterpillar is a voracious and indiscriminate consumer, able to chew on at least 80 different crops.

In Kenya, efforts were made to stop its spread by alternating maize with other crops between seasons, but the caterpillar simply switched to bananas, millet and sorghum before returning to maize when the next harvest was served up.

The invasion has taken everyone by surprise in Kenya, as elsewhere in the continent.

At first, the creature wasn’t even recognized. It was mistaken for the local, less voracious and easier-to-combat “African armyworm” — another brownish, caterpillar the size of a child’s pinky.

Once correctly identified, it was a case of try anything, for Ngoda and his neighbodrs at the center of the counter-insurgency.

“Some are using detergents, and they have actually told us it works, farmers have also used other methods like ash (sprinkled on the cobs) — it worked for some — and some farmers were putting soil in the (hole on top) of the crop to suffocate the pest,” said Brigid Cheloti, an agriculture ministry official in Vihiga County in western Kenya. 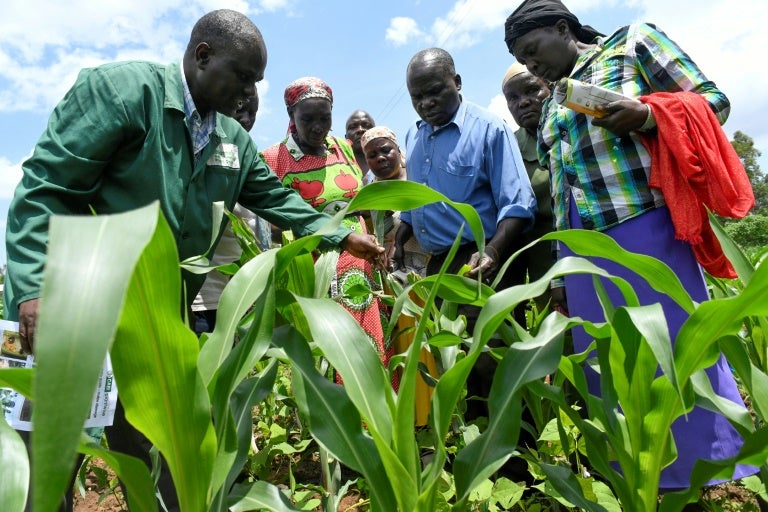 Pesticides, potentially, are another weapon. Drawing on Latin America’s experience some have been identified that are effective and available locally, said Patrick Amuyunzu of the Agrochemicals Association of Kenya (AAK).

However, the armyworm quickly develops resistance to prolonged use of the same pesticide, which must therefore be changed regularly to be effective.

In addition, the use of pesticides in general is resisted by Kenyan farmers who tend not to use them for maize and some of whom fear the environmental impact.

One possibility is genetically-modified maize, designed to produce a pesticide which kills destructive insects. But scientists have found evidence in the US that the armyworm is becoming resistant to the main GM corn strain.

In addition, GM maize remains controversial: for now, South Africa is the only African country to allow the marketing of genetically-altered seeds.

The next few months will show whether the awareness campaigns — including, for example, advice on alternating crops, mixed fields and sowing earlier in the season — have begun to roll back the onslaught.

But for the experts, one thing is certain: the fall armyworm has made Africa its home.

The only hope remains mitigating the carnage.

With no quick fix in sight, researchers are resorting to calls for better farming practices to increase yields, hoping to offset the losses caused by the armyworm’s soundless rampage. AB