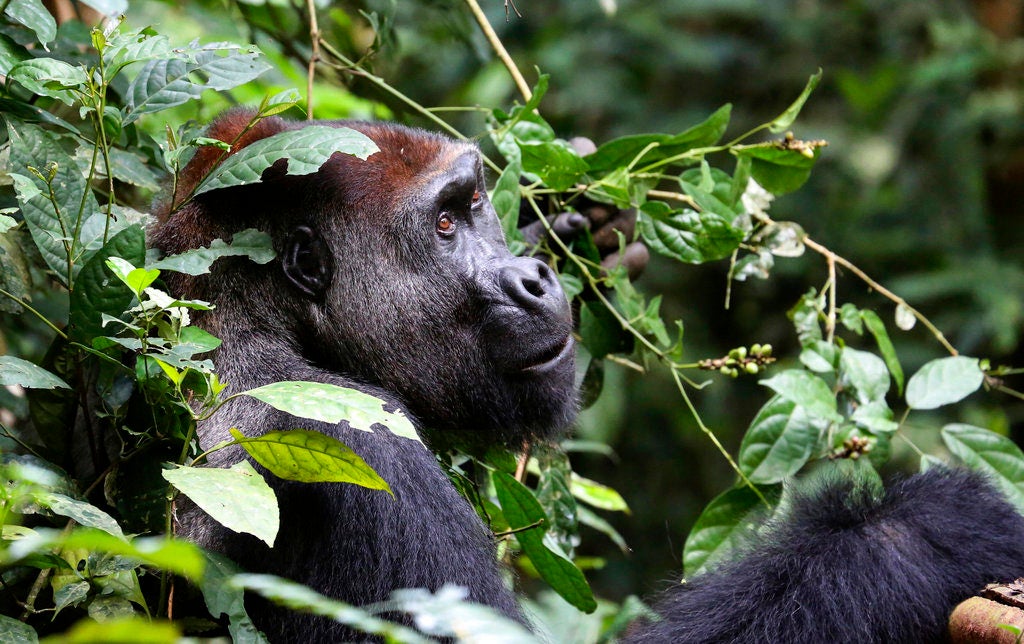 This undated photo shows Buka, a silverback gorilla in a park in the Republic of Congo. Researchers now estimate that there are more than 360,000 lowland gorillas in the wild in Western Africa, approximately one-third higher than earlier figures. However, the gorilla population has plunged by 19 percent in eight years, worrying scientists. Image: Zanne Labuschagne/Wildlife Conservation Society/AP

Maybe not for long: The same study found a 19 percent plunge in that gorilla population in just eight years.

Researchers spent a decade trudging through an area of forest that’s about the size of the state of Washington — or Ireland and Scotland combined — looking for lowland gorillas, chimpanzees and nests in what scientists said is the most accurate count for the apes in this primary region where they live, according to a study in Wednesday’s journal Science Advances .

That’s considerably more than the 150,000-to-250,000 estimate from the organization that determines how endangered species are, the International Union for the Conservation of Nature.

But it’s also significantly less than the 2005 assessment of almost 450,000 gorillas from the same research team.

The population still qualifies for the IUCN critically endangered red list because the animals are on pace to lose more than 80 percent of their population in three gorilla generations, which is a key threshold, said study author Fiona Maisels of the Wildlife Conservation Society and the University of Stirling in Scotland.

At the current rate, 80 percent or more of the gorillas will be gone by end of the century, said University of Illinois primate expert Paul Garber, who wasn’t part of the study but praised it. He said in the five years since the 2013 count, the loss has likely accelerated.

“That is a doomsday scenario, and we need to reverse this immediately,” Garber said in an email.

Gorillas are hunted as food, and Maisels blames that for much of the population drop. Four out of five gorillas live in an area not protected from hunting, the paper found. Maisels also said forest loss could be huge in the future.

To conduct the census, pairs of researchers surveyed thick forest areas looking up, down and sideways for both gorillas and chimpanzees, averaging about 1.2 miles (2 km) a day, Maisels said. Overall, researchers covered about one quarter of the 290,000-square-mile (750,000-square-km) area of Angola, Cameroon, Central African Republic, Equatorial Guinea, Republic of Congo and Gabon and then used computer simulations to account for the rest.

The same researchers found nearly 129,000 chimpanzees, which is more than conservationists thought. Because of survey sample issues they couldn’t significantly show a change in chimp numbers, but they suspect it is decreasing, Maisels said.

“We used around 20,000 nests,” Maisels said, referring to both species. “Nobody else has done that.”

While two other outside experts praised the study, Volker Sommer at the University College London said the counting method is flawed because researchers can’t tell if nests they find are day or night nests, new or old, single or multiple. He said in an email that then adding computer modeling to it “takes a questionable approach to new heights” so “we cannot expect standardized results from such an approach.”