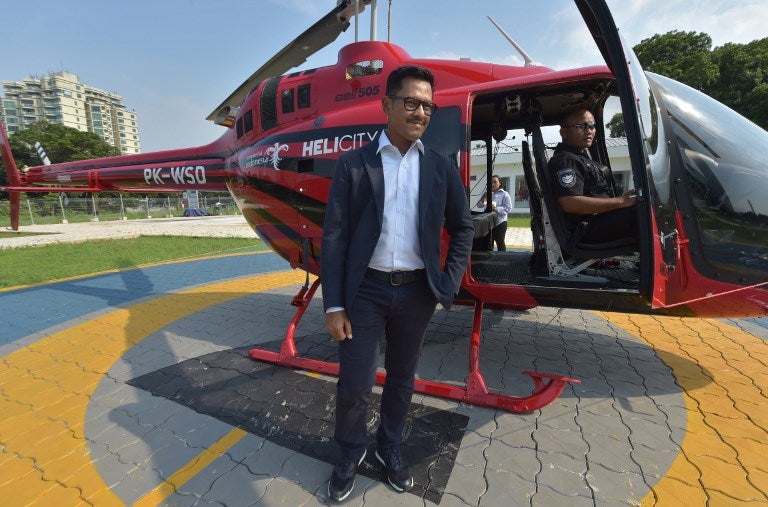 This picture taken on March 29, 2018 shows Whitesky Aviation chief executive Denon Prawiraatmadja posing next to a Helicity helicopter in Jakarta. After receiving an order from a smartphone app, the helicopter taxi soars into the sky above Jakarta, zipping over monster traffic jams, ramshackle red-roofed houses, and skyscrapers — one of the Uber-style chopper-hailing services taking off to help commuters race through increasingly congested megacities. (AFP PHOTO / ADEK BERRY)

Within minutes of using an app to book a ride, Agostino Fernandes was looking down on lush greenery from a helicopter taxi high above Bangalore – one of several Uber-style chopper services taking off to help commuters tackle increasingly congested megacities.

In just under 30 minutes – a quarter of the time it would have taken from downtown Bangalore by road – Fernandes was strolling through Kempegowda International Airport to his gate.

“It’s much better than the usual car or taxi because it saves time,” he told AFP. “And for a city like Bangalore, which they call India’s green capital because of the parks and gardens, you get a very nice view.”
From New York to Jakarta, chopper-hailing services have been taking off to help commuters beat the traffic chaos.
Private helicopter charters have been available for decades – at a price – but the latest services are far cheaper and more accessible to the public, allowing anyone with a smartphone and a credit card to order a ride with relative ease.

Sameer Rehman, Asia-Pacific managing director of Bell Helicopter, said chopper manufacturers were predicting more such services in traffic-clogged parts of Southeast Asia in particular, describing it as an “important test-bed” for the wider region.

“That can be replicated throughout other cities and countries in the Asia-Pacific,” he told AFP at a conference in Singapore.
Another similar service was recently launched in the Indonesian capital Jakarta, a chaotic metropolis of over 10 million people, which suffers some of the world’s worst jams.
Operated by Whitesky Aviation, Helicity now has about 60 customers each month, mostly from the business world.

Its services include a 20-minute ride from Jakarta airport into the heart of the city for six million rupiah ($430) for up to four people, as well as a 45-minute flight from Jakarta to Bandung, 150 kilometers (90 miles) away, from 14 million rupiah (around $995).
While it offers an alternative to sitting in traffic for hours and is cheaper than private charters in the past, the prices are nevertheless out of reach for most people in Jakarta, where the monthly minimum wage is about $250.

And it has not all been easy going for Whitesky in recent times – one of their helicopters crashed last month on Indonesia’s central Sulawesi island as it flew over a mining area, killing one person on the ground and injuring four passengers.
Onerous regulations, poor infrastructure

In Bangalore, one of India’s most congested megacities, HeliTaxii launched in March, offering a seat in a helicopter from the airport to IT industrial park Electronic City for about $65 per person — the same journey that Fernandes took on launch day.

In Brazil’s Sao Paulo, the app Voom offers a 30-kilometer helicopter ride to the airport for about $150 – 10 times cheaper than private charters in the past – while in New York, a chopper-hailing service ferries people between downtown and surrounding airports.

Despite the growth of such apps, industry players warn there are still major hurdles.

One is finding suitable take-off and landing sites, particularly in Asian cities. Helipads have been springing up rapidly in recent years but a large number are private and observers warn many have not been certified as safe by aviation authorities.

Another restriction is on flying times. Whitesky Aviation chief executive Denon Prawiraatmadja said that since the five-strong fleet of choppers service in Jakarta was for civilian purposes, they were currently only allowed to fly between 6:00 a.m. and 6:00 p.m.
“We are in the process of getting more operating hours, so it can become a 24/7 operation,” he told AFP. “We hope this type of new regulation will allow us to grow the business.”
The company has big expansion plans: in 2016, they signed a 30-helicopter deal with Bell and will receive two Bell 505s every year until the deal is completed. It also has several fixed-wing aircraft in its fleet.
Similarly in Bangalore, Helitaxii is only allowed to fly from 6:30 a.m. to 10:00 a.m., and in a later slot from 3:00 p.m. to 6:00 p.m.
While the popularity of such services is growing, analysts said there are unlikely to be large numbers of helicopter taxis taking to the skies soon as prices – although lower than they once were – will remain a barrier.

Saj Ahmad, chief analyst at consultancy StrategicAero Research, also cautioned there was much uncertainty surrounding the nascent industry and how it would operate.

“Will there be further security screenings?” he said. “What sort of passengers will be allowed on these flights?”             /kga