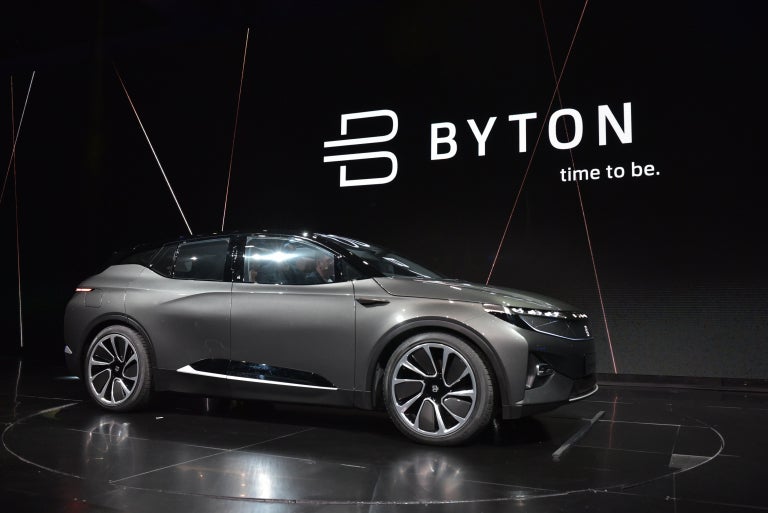 The Byton car will use facial recognition to unlock and adapt to the driver and offer a range of other ways to interact including voice control with Amazon Alexa, touch, and gesture. © MANDEL NGAN / AFP

Washington, United States – China-based electric car startup Byton has raised $500 million as it ramps up efforts to take on rivals like Tesla.

Byton’s new capital is led by from FAW Group, Tus-Holdings, CATL, and others, a statement from its North American headquarters in California said on Monday.

“The success of this funding round highlights how diversified strategic investors will further expand Byton’s circle of friends and broaden our development opportunities,” said president and co-founder Daniel Kirchert.

Early this year, the company unveiled at the Consumer Electronics Show (CES) its vision for “intuitive and intelligent” cars for global markets starting next year from around $45,000.

Byton is led by former executives from Tesla, BMW, Apple, and Google, and expects to launch in China by 2019 and in the United States and Europe by 2020.

The statement said Byton officially opened its global headquarters in Nanjing, China, which works with a research center in Silicon Valley and a design center in Munich, Germany.

The first batch of prototype models is set to roll out in April 2019 for testing, with the pilot production program starting in the first half of 2019.

Byton has also been working on autonomous driving technology with some self-driving functions to be incorporated in its first models.

At CES, Byton executives showed how the car could use facial recognition to unlock and adapt to the driver, as well as offer a range of other ways to interact, including voice control with Amazon Alexa, touch, and gesture. /kga