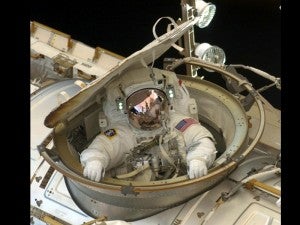 Astronauts work to steer clear of decompression sickness, known as "the bends," a condition that can afflict scuba divers if they rise to the surface too quickly. AFP

“Drew Feustel and Mike Fincke switched their suits to battery power at 1:43 am EDT (0543 GMT), signifying the start of today’s planned six and a half hour excursion,” the US space agency said in a statement.

The two astronauts completed a new set of light exercises aimed at preventing decompression sickness known as “the bends,” a condition that can afflict scuba divers if they rise to the surface too quickly.

The combination of breathing and low-effort exercises, known officially as the in-suit light exercise pre-breathe protocol, and informally as the “slow motion hokey pokey,” is intended to purge nitrogen from the bloodstream.

The failure to do so could lead to the formation of gas bubbles as they stroll through space, causing pain in the joints or, in rare cases, paralysis or death.

On the eve of the past 70 spacewalks, astronauts have camped out overnight in an airlock where the pressure is 10.2 pounds per square inch, in between that of the space station (around 14 psi) and the spacesuits (about 4 psi).

The new regimen is aimed at helping to conserve oxygen at the space station, which will be important once the shuttle program ends later this year and Russian spacecraft are the only vehicles equipped to resupply the lab.

The space walk — the third of four scheduled during the Endeavour shuttle’s final mission — is aimed at completing an external wireless antenna system and mending parts of the Russian side of the space station.