Marriage is (literally) good for the heart – study 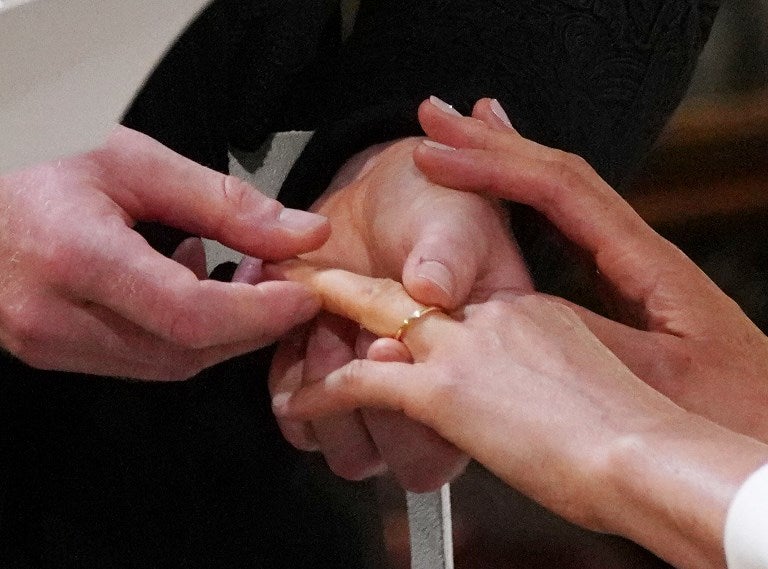 Britain’s Prince Harry, Duke of Sussex, places the wedding ring on the finger of US fiancee of Britain’s Prince Harry Meghan Markle (right) during their wedding ceremony in St George’s Chapel, Windsor Castle, in Windsor, on May 19, 2018. A study has found marriage and living into old age may help ward off heart disease and stroke. AFP

PARIS, France – Even if marriage is sometimes more a bed of nails than roses, living into old age with a partner may help ward off heart disease and stroke, researchers said Tuesday.

A sweeping survey of research conducted over the last two decades covering more than two million people aged 42 to 77 found that being hitched significantly reduced the risk of both maladies, they reported in the medical journal Heart.

The study examined ethnically varied populations in Europe, North America, the Middle East and Asia, adding weight to the results.

The risk of dying was likewise elevated for the non-married, by 42 percent from coronary heart disease and by 55 percent from stroke.

The results were nearly the same for men and women, except for stroke, to which men were more susceptible.

“These findings may suggest that marital status should be considered in the risk assessment for cardiovascular disease,” concluded a team led by Chun Wai Wong, a researcher at Royal Stoke Hospital’s department of cardiology, in Stoke-on-Trent in Britain.

Four-fifths of all cardiovascular disease can be attributed to a proven set of “risk factors”: advanced age, being a man, high-blood pressure, high cholesterol, smoking, and diabetes.

Marriage, in other words, could be an important share of the missing 20 percent.

More precisely, living together — with or without a wedding band — is probably the operative factor, if indeed conjugal status has any impact at all.

But most of the 34 studies reviewed by Wong and colleagues did not identify couples out of wedlock or same-sex unions, so it was not possible to know whether, statistically, such arrangements were the equivalent of being wed.

Because the study was observational rather than based on a controlled experiment — something scientists can do with mice but not humans — no clear conclusions could be drawn as to cause-and-effect.

That leaves open the question of why marriages may be “protective”.

“There are various theories,” the researchers said in a statement.

Having someone around to take care of one’s health problems and keep track of one’s meds is probably a plus, as are two incomes or pensions instead of one.

More intangibly, not living alone is thought to be good for morale, and for neural stimulation. People living in couples, earlier research has shown, also have lower rates of dementia. /cbb