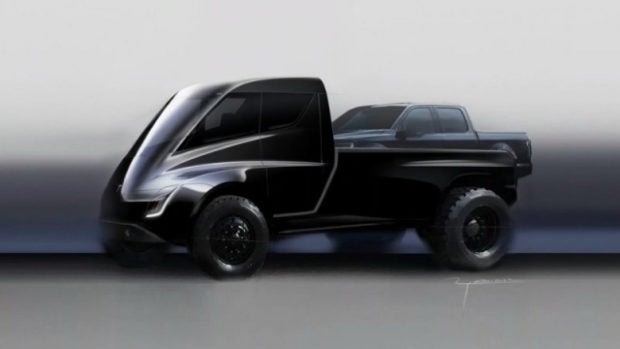 Despite ongoing issues with production of current models and glitches with its autonomous drive systems, Tesla is still pushing ahead with developing more new and exciting models. In his usual fashion, Tesla’s Elon Musk has been revealing details on Twitter of the short-nose pickup truck his company intends to build. Along with revealing some of the vehicle’s specifications, Musk has also been asking potential buyers what they’d like to see in the company’s upcoming commercial vehicle.

We already knew from previous comments that the Tesla pickup is going to be big, possibly as big as or even bigger than Ford’s all-conquering F-150. In America that would place it firmly in the full-size pickup segment, which is much larger than European pickups like the Mitsubishi L200, Nissan Navara and Ford Ranger.

Musk revealed the truck will have standard dual-motor all-wheel drive, with what he is referring to as “crazy torque.” That’s probably to be expected considering the power figures associated with existing Tesla products. There will also be an auto-leveling suspension setup which is really useful for a work truck, and the new vehicle will also have the ability to parallel park automatically. If the truck is to be offered in Europe in the same form and size as America, the automatic parallel parking system will be particularly welcome as an aid to squeezing a full-size truck into spaces not really designed to accommodate such bulk.

The truck will be equipped with power outlets in the bed for 240V, in the style of a true workhorse. And according to Musk, there will also be a 360-degree camera view and sonar system for monitoring its surroundings. Although he also dropped a hint of a “special built-in sensor,” he didn’t go further to divulge what the sensor is actually for, but instead said “Details later.”

When the Tesla founder asked followers, “What would you love to see in a Tesla pickup truck?” a number of features were suggested such as heated door handles and a voice-activated bed enclosure.

As the truck will be bigger than the Model X SUV, it will be able to accommodate a larger battery, and that would be essential as a commercial vehicle with a limited range would struggle to win over potential buyers. Musk has previously estimated a range of between 400 and 500 miles for the pickup, but there’s also the possibility of higher-specification versions with even greater ranges.

It’s thought the truck will be fully unveiled in 2020 with deliveries starting the following year. AB