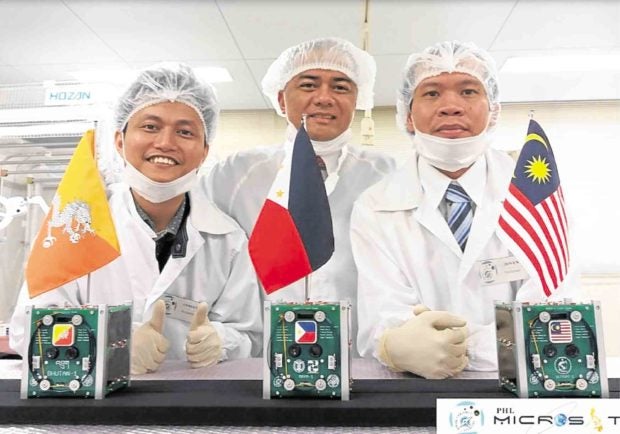 ONE-KILO WONDERS Adrian Salces (left) and Joven Javier (right) smile with pride after the launch of the 10-cubic centimeter Maya-1 satellite they had developed at Kyushu Institute of Technology in Fukuoka, Japan. Standing behind them is Joel Joseph Marciano, program leader of the Development of Philippine Scientific Earth Observation Microsatellite program. PHOTO FROM PHL-Microsat

Adrian Salces and Joven Javier were calm and composed as they waited for the tiny satellite they had built under the “Birds-2” project in Japan to be blasted into orbit 400 kilometers above the Earth.

After all, the doctorate and master’s students in space engineering at Kyushu Institute of Technology (Kyutech) in Fukuoka, made sure that their 10-cubic-centimeter Maya-1 satellite could withstand the extreme conditions of its space voyage.

Much more excited than the pair were the students and engineers watching via livestream the countdown to the historic moment at University of the Philippines Diliman (UPD) in Quezon City.

At exactly 5:41 p.m. on Friday (Manila time), SpaceX’s Falcon-9 CRS 15 rocket blasted off at Cape Canaveral in Florida, heading to the International Space Station (ISS), carrying Maya-1, the country’s first Filipino-made cube satellite (cubesat), and the Philippines’ hope that it could build its next satellites on its own shores.

Maya-1 is one of the three cube satellites under Kyutech’s 2nd Joint Global Multination Birds Project (Birds-2), along with Bhutan’s Bhutan-1 and Malaysia’s UiTMSAT-1. Salces and Javier took a year and three months to build the nanosatellite.

While independently made, the operation and control of the three cubesats will be shared by the three countries after they are released from the ISS early in August. They will be operational for six months.

“The three will form a constellation, orbiting the earth from different places. This will provide the countries more opportunities to make measurements and run experiments, than just with using one cubesat,” explained Joel Joseph Marciano Jr., manager of PHL-Microsat program and director of DOST-Asti.

Weighing only 1 kilogram, the Maya-1 was made with “off-the-shelf” commercial components which were tested to be “space-qualified.”

Its mission includes an automatic packet radio service digipeater, allowing it to communicate with ham radios used by amateur radio operators and enthusiasts.

It also has a store-and-forward system, which can collect data from ground sensor terminals, and save and forward the data to any member ground station.

The Maya-1 can be used to send and receive messages from far-flung areas in the country where there are no cellular phone connections, Salces said in an interview on Facebook Messenger.

Maya-1 and its sibling satellites may also be used to relay text messages and advisories during or after typhoons when communication signals are down.

The cubesats are also equipped with a low-cost global positioning system (GPS) chip, a magnetometer (to measure magnetic fields in space), and wide-angle and narrow-angle cameras for capturing low-resolution images and videos.

Salces and Javier said Maya-1 is different from the much bigger Diwata-1, the first Filipino-made microsatellite launched in March 2016. Both are projects under PHL-Microsat.

Although Diwata-1’s high-precision cameras are used for Earth observation, including capturing images of areas that were hit by Supertyphoon “Yolanda” (international name: Haiyan), Maya-1 is dedicated to “experimentally testing of commercial apparatus” and “a cost-effective educational platform” that could be used by Filipinos to build satellites.

Marciano said the construction of Maya-1 and its launching cost around $150,000, or around P8 million.

Although most developed countries, such as United States and Japan, have launched their cubesats at the turn of the century, the country was “not really late” in space engineering development, Marciano said.

“We are actually at the right time. Many countries have been ahead of us but it’s good because we have learned a lot from them,” Marciano said.

“We are taking advantage of the know-how of other countries that are being cascaded to our students, and they’ll be bringing those back home,” he added.

Once they finish their programs at Kyutech, Salces and Javier plan to return to UPD to teach and to share with Filipino students and engineers what they had learned.

“We will build a generation of space engineers,” Salces said.

Javier, who will be coming home in October, will be working to develop the country’s first Filipino “homemade satellite.”

He noted that while they were created by Filipinos, both Maya-1 and Diwata-1 were developed in Japan. The previous communication satellites, Agila-1 and Agila-2, were both privately owned and bought abroad.

“In two to three years, we are planning that one of the next satellites we launch is made in the Philippines,” Javier said. “From one satellite we can make abroad, maybe we can build two to three at the same period if made locally. In the long run, these satellites can have more practical and operational uses,” he said. —With reports from Joseph Sebastian Javier and Roselie Mari Villaflor

It’s final: Mary Jane Veloso can testify vs her recruiters

It’s final: Mary Jane Veloso can testify vs her recruiters