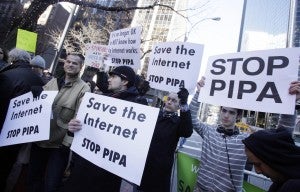 Demonstrators protest in front of the building housing the New York offices of U.S. Sens. Charles Schumer and Kristen Gilliband, Wednesday, Jan. 18, 2012. January 18 is a date that will live in ignorance, as Wikipedia started a 24-hour blackout of its English-language articles, joining other sites in a protest of pending U.S. legislation aimed at shutting down sites that share pirated movies and other content. (AP Photo/Richard Drew)

LOS ANGELES— In a move that heightens the growing tension between Silicon Valley and Hollywood, Wikipedia and other websites went dark Wednesday in protest of two congressional proposals intended to thwart the online piracy of copyrighted movies and TV programs.

The web-based encyclopedia is part of a loose coalition of dot-coms and large technology companies that fear Congress is prepared to side with Hollywood and enact extreme measures — possibly including the blocking of entire websites— to stop the online sharing and unauthorized use of Hollywood productions.

The fight will test which California-based industry has the most sway in Washington.

For now, Silicon Valley appears to have the upper hand. Supporters of the legislation — called the Stop Online Piracy Act in the House and the Protect Intellectual Property Act in the Senate — say the bills are aimed at protecting jobs in the movie and music industries. But a campaign including tech heavyweights such as Google Inc. and Yahoo Inc. has successfully portrayed the bills as an attack on a free and open Internet.

“It has nothing to do with stolen songs or movies,” said Justin Ruben, executive director of MoveOn.org, which is participating in the blackout. Ruben says tougher legislation — even directed overseas — could make domestic cultural commentators more prone to legal attack.

Rather than showing encyclopedia articles, Wikipedia displayed a blacked-out page describing the protest and offering more information on the bills. Many articles were still viewable on cached pages.

Reddit.com shut down its social news service for 12 hours. Other sites made their views clear without cutting off services. Google blacked out the logo on its home page, directing people to a page where they could add their names to a petition.

The one-day outage was timed to coincide with key House and Senate committee hearings as they prepare to send the bills to the full floor for debate.

However, sponsor Rep. Lamar Smith, a Texas Republican, sought last week to remove a controversial provision from the House bill that could force Internet service providers to interfere with the way Web addresses work for foreign sites deemed dedicated to piracy. He postponed work on the measure until February.

Critics believe such tinkering with core Internet technology treads into dangerous territory that could lead to online censorship. It might also give hackers a new way to wreak havoc.

The White House raised concerns that the bills could stifle innovation. Over the weekend, the Obama administration reacted to two online petitions, saying it “will not support legislation that reduces freedom of expression, increases cybersecurity risk or undermines the dynamic, innovative global Internet.”

At the same time, the administration called on all sides to “pass sound legislation this year that provides prosecutors and rights holders new legal tools to combat online piracy originating beyond U.S. borders.”

That nuanced stance is President Barack Obama’s attempt at “threading the needle” between two important constituencies as he seeks re-election in November, said Jeffrey Silva, a technology policy analyst at Medley Global Advisors in Washington.

On the one hand, his administration has defended a free, open Internet as it watched repressive regimes fall in the Middle East with help from social media such as Twitter. It has also been a proponent of the concept of “net neutrality,” which prevents Internet service providers from slowing online traffic that comes from file-sharing sites known to trade in pirated content.

On the other hand, Obama and other Democrats have gone to Hollywood dozens of times to raise campaign funds over the years.

“The administration is trying to fight to protect the Internet space,” Silva said. “But at the same time, it doesn’t want to disenfranchise Hollywood and the business community.”

Indeed, behind the protests and public posturing, both Hollywood and Silicon Valley spend generously to lobby causes in Washington. According to the Center for Responsive Politics, the movie, television and music industries spent a combined $91.7 million on lobbying efforts in 2011, compared with the computer and Internet industry’s $93 million.

In the 2012 election cycle, the movie, television and music industry offered up $7.7 million in direct campaign contributions to congressional candidates. The computer and Internet industry contributed $6.6 million.

Despite the uproar on websites and blogs, PIPA remains firmly in play. Senate Judiciary Committee Chairman Patrick Leahy said Tuesday that he intends to push the bill toward a floor vote on Jan. 24. He said much of the criticism of the bill is “flatly wrong.”

But amid the high-tech campaign against the bills, several lawmakers came out in opposition. At least three Senate Republicans who had previously cosponsored the Senate bill — Orrin Hatch of Utah, Roy Blunt of Missouri and John Boozman of Arkansas — issued statements Wednesday saying they were withdrawing their support.

It remains to be seen whether the two industries can come to the table and negotiate a compromise.

“There are good companies, and then there are companies simply out to preserve the Wild West, free-to-steal business model,” said Recording Industry Association of America CEO Cary Sherman. He expects to know “within the next few weeks” whether the legislation can survive.

Lawmakers may have a personal incentive to keep online piracy on the nation’s political radar, said Fred Wertheimer, president of Democracy 21, a non-partisan government-accountability watchdog. If the issue stays alive through the current election cycle, it may help bring in campaign contributions from high-tech donors and Hollywood later this year.

The issue “becomes an opportunity for raising more money from these groups,” Wertheimer said. “If you’re into an important issue and money is flowing in on both sides, then both sides can up the ante.”

Congressional reporter Jim Abrams contributed to this report from Washington.