Scientists create hybrids in race to save rhino sub-species 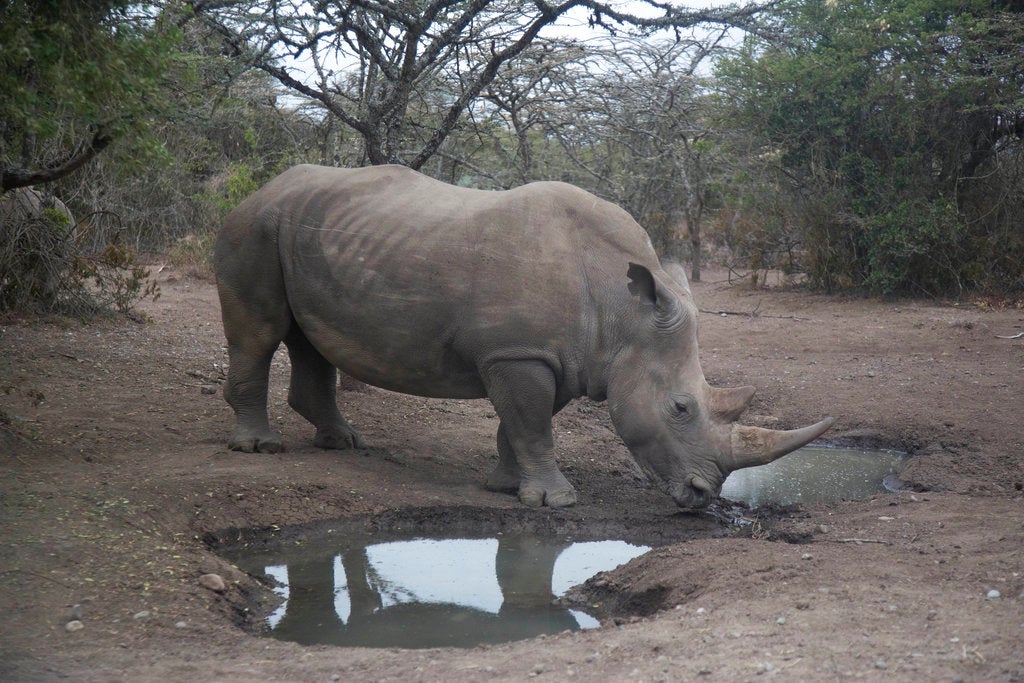 FILE — In this Friday, March 2, 2018 photo Najin, one of only two female northern white rhinos left in the world, walks in the pen where she is kept for observation, at the Ol Pejeta Conservancy in Laikipia county in Kenya. Scientist say they’re several steps closer to perfecting a method for stopping the extinction of northern white rhinos. Writing in the journal Nature Communications, researchers said Wednesday they’ve succeeded in creating embryos using frozen northern white rhino sperm and eggs from a southern white rhino. (AP Photo/Sunday Alamba)

BERLIN — Scientists say they’re several steps closer to perfecting a method that could prevent the extinction of northern white rhinos, of which only two animals are known still to be alive.

According to a paper published Wednesday in the journal Nature Communications, researchers have succeeded in creating embryos using frozen northern white rhino sperm and eggs from a southern white rhino, a closely related sub-species.

It’s the first time such hybrid embryos have been created and the scientists from Germany, Italy and the Czech Republic say it could provide a pathway to saving the critically endangered northern white rhino after the last male, called Sudan, died in March.

They plan to harvest the egg cells of the two surviving female rhinos soon and use preserved sperm to produce “pure” northern white rhino embryos. Since the females, a mother and daughter called Najin and Fatu, are unable to bear offspring themselves, the embryos would be implanted in a southern white rhino surrogate.

In order to increase the supply of eggs and preserve the northern white rhino’s genetic diversity, scientists are also working on a second method that would coax frozen skin cells from deceased animals into becoming egg cells, a procedure that has already succeeded in mice.

Thomas Hildebrandt, of the Leibniz Institute for Zoo and Wildlife Research in Berlin, said researchers hope the first northern white rhino calf will be born in about three years.

“We are quite confident with the technology we have developed,” he said during a telephone conference with reporters detailing the research.

Saving the northern white rhino has become an international effort, with cooperation but also some rivalry among scientists and institutions around the world, including zoos in San Diego and Cincinnati.

Some experts have criticized the effort however, saying it comes too late.

“I have no doubt that its purely scientific merit is laudable and it might have some application to endangered species conservation in the future,” said Richard Kock, a conservationist at Britain’s Royal Veterinary College who has worked extensively in Africa. “But I am afraid it is very much Nero fiddling after Rome is burning with respect to (northern) white rhino.”

Kock and fellow conservationists warned against focusing only on the northern white rhino sub-species, noting that its southern cousin has come back from the brink of extinction and now numbers some 21,000 individuals.

Instead, they suggested, work should focus on saving other endangered rhino species that can still be found in the wild.

“Assisted reproductive technologies are very expensive and their success is far from guaranteed. Meanwhile, we don’t have enough funding to conserve the other four rhino species, all of which are more threatened with extinction than the white rhino,” said Bob Smith, director of the Durrell Institute of Conservation and Ecology at the University of Kent, England.

Hildebrandt insisted the effort is worthwhile. “The northern white rhino didn’t fail in evolution,” he said. “It failed because it’s not bulletproof. It was slaughtered by criminals which went for the horn because the horn costs more than gold.”

Northern white rhinos were once abundant across Central and East Africa, but conflicts and poaching wiped them from their natural habitat.

The rhino’s disappearance has left a void in the region’s ecosystem that could have significant impacts in the future, Hildebrandt said. “We have the tools in our hands to correct that.”

Cesare Galli, whose Italy-based company Avantea has lengthy experience with the artificial reproduction of horses, said recent advances in stem cell technology could help the rhino preservation effort. The team is hoping that within a decade, scientists will be able to produce new rhino eggs from frozen skin cells

Jan Stejskal, a spokesman for Dvur Kralove Zoo in the Czech Republic, which has a long history of rhino conservation, said scientists hope to travel to Kenya before the end of the year. They are still waiting for permission from Kenyan authorities to perform the delicate procedure of removing egg cells from Najin and Fatu.

While the scientists are confident about being able to harvest eggs from the two females, questions remain over the risk to the rare animals’ health.

“We as scientists are highly afraid that something unexpected happens during that procedure,” said Hildebrandt. “That would be a nightmare.”  /muf