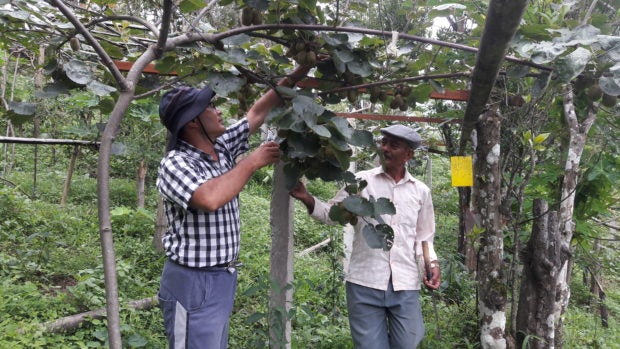 TSIRANG, Bhutan — Farmers wanting to try kiwi farming should visit Doonglagang in Tsirang where farmer Kalyan Mahat has an orchard of the high-end cash crop.

It’s a lush green farm. Kiwi, both red and Hayward is planted among oranges and cardamom.

The farmer planted about 300 saplings in three acres of land in 2015. Today, the trees are heavy with fruits.

Kalyan said that commercial fruit-bearing period is after five years of plantation but he is expecting to harvest at least 10,000 kiwis this year. Kiwi (imported) is today available for Nu 50 (US$ 0.73) a piece in the market.

Kalyan first brought saplings from Ilam in Nepal after seeking permission from the Department of Agriculture.

He said he relied on YouTube for the technical methods of kiwi plantation and management.

He explained that to plant kiwi, it needs the ratio of nine female and a male. “The plant and its branches are supported by a trellis. Success and failure of kiwi farming depends on how you manage.”

Kalyan said that prior to kiwi plantation, more than half of his land remained barren. The main source of income for his parents, citrus, was fast dying of citrus greening.

His father, Santa Bahadur Mahat, said that kiwi may be a high-end fruit but it has not grown in Bhutan so far.

He said he did not support his son initially because investing in a new cash crop was not wise. “The lush fruiting proved me wrong.”

The family bought additional three-acre land in the neighborhood to plant more kiwi plants. Besides kiwi, they also grow avocado, dragon fruit, ground apple, strawberry, cardamom and citrus among others.

Kalyan explained that for a farmer, planting at least 100 saplings and managing them well would fetch an income of Nu 900,000 (US$ 13,235) a year. “That’s keeping an average of 50kg fruit per plant, which usually bears at least 100kgs in five years if managed well,” he said.

He has been encouraging his neighbors to try growing at least a set but to no avail.

Expecting others to join him, he has started kiwi nursery as well. A set of Hayward sapling is available for Nu 3,500 (US$ 51.47).

Although Kalyan has raised red kiwi nursery, he isn’t authorized to sell without approval from the agriculture ministry. The ministry is carrying out a study of red kiwi cultivation in the country.

A report is expected to be released soon.