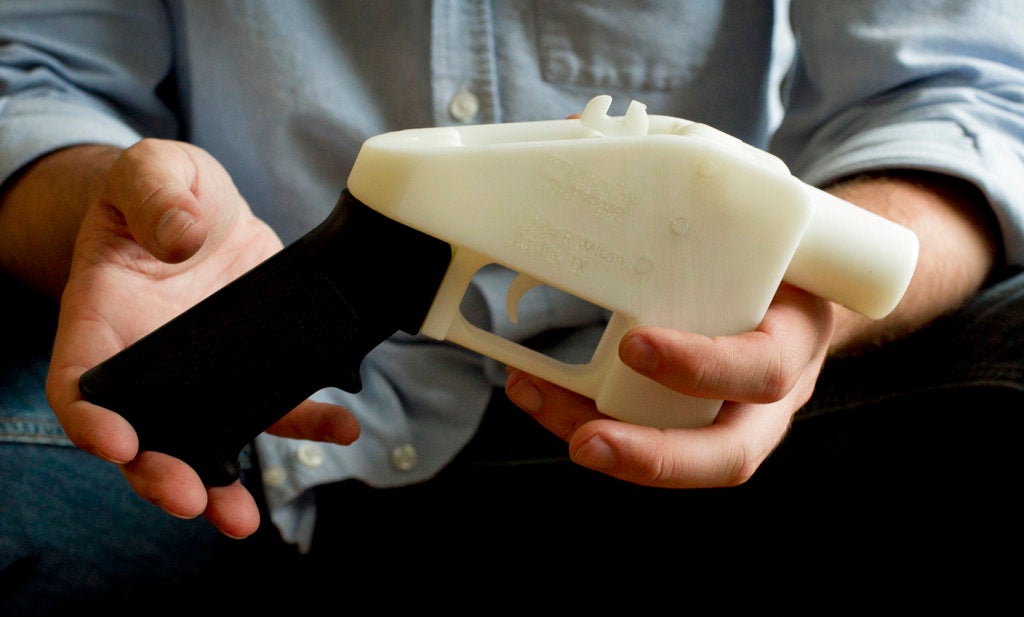 FILE – This May 10, 2013, file photo shows a plastic pistol that was completely made on a 3D-printer at a home in Austin, Texas. A coalition of gun-control groups has filed an appeal in federal court seeking to block a recent Trump administration ruling that will allow the publication of blueprints to build a 3D-printed firearm. (Jay Janner/Austin American-Statesman via AP, File)

They look futuristic, the type of firearms that would-be assassins use in movies: 3D-printed guns made of a hard plastic that are simple to assemble, easy to conceal and tough to trace.

The future is here.

After spending years fighting the federal government for the right to do so, a Texas company was given the green light to post blueprints online showing people how to make 3D-printed guns from the comfort of their home.

Gun safety advocates and some law enforcement officials are appalled, worried that this is exactly what criminals and terrorists want: guns that can’t be flagged by metal detectors, don’t have serial numbers to trace, and don’t require the usual background checks. A coalition of gun-control groups filed an appeal Thursday in federal court seeking to block a recent Trump administration ruling allowing Cody Wilson and his company, Defense Distributed, to post blueprints online to create a 3D-printed firearm.

“There is a market for these guns and it’s not just among enthusiasts and hobbyists,” said Nick Suplina, managing director for law and policy at Everytown for Gun Safety, one of the three groups that have gone to court. “There’s a real desire and profit motive in the criminal underworld as well.”

Wilson, the founder of Defense Distributed, first published downloadable designs for a 3D-printed firearm in 2013. It was downloaded about 100,000 times until the State Department ordered him to cease, contending it violated federal export laws since some of the blueprints were downloaded by people outside the United States.

But in a reversal that stunned gun-control advocates, the State Department in late June settled its case against Wilson and agreed to allow him to resume posting the blueprints at the end of July. Wilson took to Twitter, declaring victory and proclaiming he would start back up on August 1.

Wilson did not return an email seeking comment. His attorney, Josh Blackman, a professor at the South Texas College of Law Houston, declined to comment.

Gun industry experts say the guns are simply a modern-day equivalent of what already is legal and readily available: the ability to assemble your own firearm using traditional materials and methods at home without serial numbers. They argue that 3D-printed firearms won’t be a draw for criminals since the printers needed to make one are wildly expensive and the firearms themselves aren’t very durable.

“It costs thousands and thousands and thousands of dollars to acquire a printer and the files and the knowhow to do this. They don’t work worth a damn. Criminals can obviously go out and steal guns or even manufacture quote-unquote real guns, not 3D printed,” said Larry Keane, executive director of the National Shooting Sports Foundation, which represents gun manufacturers. “If you’re a gang banger in L.A., are you going to go out and spend tens of thousands of dollars to buy a printer to print a gun that doesn’t work very well or are you just going to steal one?”

Unlike traditional firearms that can fire thousands of rounds in their lifetime, experts say the 3D-printed guns normally only last a few rounds before they fall apart. They don’t have magazines that allow the usual nine or 15 rounds to be carried; instead, they usually hold a bullet or two and then must be manually loaded afterward. And they’re not usually very accurate either.

A video posted of a test by the federal Bureau of Alcohol, Tobacco, Firearms and Explosives in 2013 showed one of the guns produced from Wilson’s design — the Liberator — disintegrating into pieces after a single round was fired. Wilson’s website will also offer blueprints for AR-style long guns besides its first product: a pistol called the Liberator.

A similar style of firearm was famously used by John Malkovich’s character in the 1993 movie “In the Line of Fire” in which he portrays a would-be assassin who surreptitiously brings the firearm into a hotel ballroom, assembles it underneath his dinner table and then tries to use it to kill the president.

Law enforcement officials express concern about allowing the designs for such firearms to be publicly available expressly because they’re easy to conceal and untraceable since there’s no requirement for the firearms to have serial numbers.

“When you think about all the rhetoric we here in our nation about tightening our borders and homeland security, and now we’re going to put out there for anyone who wants a recipe for how to overcome … TSA airport screenings or any other metal detector,” said Rick Myers, executive director of the Major Cities Chiefs Association. “It’s absolutely insane.”

The State Department decision came amid an obscure administrative change — begun under the Obama administration — in how the weapons are regulated and administered. Military grade weapons remain under the purview of the State Department, while commercially available firearms fall under the Commerce Department. The settlement with Wilson determined that 3D-printed firearms are akin to more traditional firearms that aren’t subject to ITAR, or International Traffic in Arms Regulations, overseen by State.

Robert Spitzer, chairman of political science at the State University of New York at Cortland and an expert on the Second Amendment, warned that while 3D-printed firearms are a novelty now — too expensive to make and too fragile to be used for more than a few shots — technology will soon catch up.

“Their popularity right now is limited,” Spitzer said. “There was interest in the blueprints because they’re sort of exotic and because sort of a taboo thing.”

“It’s not very practical,” Pratt said. “Let’s be serious. First of all, you’re going to plunk out thousands of dollars just for the printers. This is a very expensive route to go just to get a piece of plastic that will only last a round.”  /muf