Facebook’s day of reckoning: Blip or sign of broader turn? 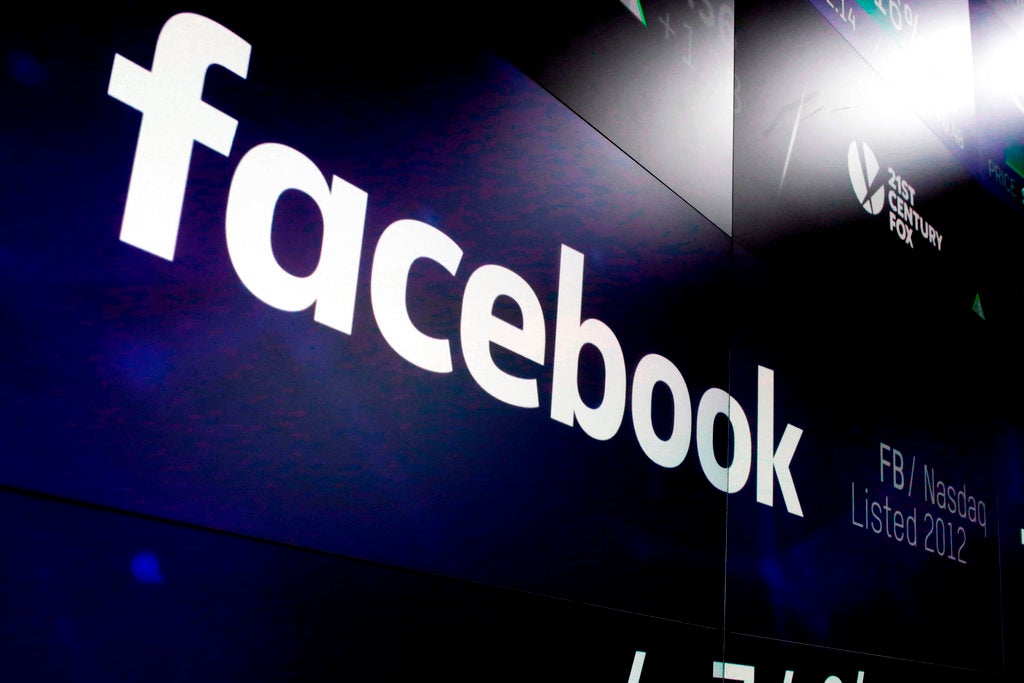 FILE – In this March 29, 2018, file photo, the logo for Facebook appears on screens at the Nasdaq MarketSite in New York’s Times Square. Facebook’s user base and revenue grew more slowly than expected in the second quarter of 2018 as the company grappled with privacy issues, sending its stock tumbling after hours. (AP Photo/Richard Drew, File)

NEW YORK — Facebook faced a day of reckoning Thursday as its shares plunged in the biggest one-day drop in stock-market history.

The 19 percent drop vaporized $119 billion of the company’s stock-market value; CEO Mark Zuckerberg saw his net worth fall by roughly $16 billion as a result. It was Facebook’s worst trading day since going public in 2012; the collapse eclipsed Intel’s decline of $91 billion in September 2000, without adjusting for inflation.

The plunge followed Facebook’s warning late Wednesday that its revenue growth will slow down significantly for at least the remainder of the year and that expenses will continue to skyrocket.

In a sign of just how bullish investor expectations were, though, the collapse merely returned Facebook shares to a level last seen in early May. At that point, the stock was still recovering from an earlier battering over its big privacy scandal, in which a political consulting firm with ties to President Donald Trump improperly accessed the data of tens millions of Facebook users.

Now come the big questions: Is this a temporary setback, or the start of a painful new road for the giant social network? And does a similar comeuppance await other high-flying technology behemoths?

Both the slower growth forecast and heavier spending reflect problems largely of Facebook’s own making.

New European privacy rules, inspired in part by Facebook’s relentless mining of its own users’ data, are starting to hamper the company’s advertising business. And the increased spending aims, among other things, to prevent a replay of the fake news and propaganda that Russian agents unleashed on an unguarded Facebook in an attempt to sway the 2016 presidential election.

Zuckerberg even noted during a call with analysts that “we’re investing so much in security that it will significantly impact our profitability.”

Overall, technology giants — Facebook, Apple, Google, Amazon and others — have enjoyed almost unprecedented growth in revenue and stock price for years. They have seemed unstoppable, even in the face of regulatory pressure, user dissatisfaction and broader existential questions about their impact on society. Technology companies account for six of the 10 biggest companies in the S&P 500 Index.

Some see the Facebook selloff as clear evidence that nothing can grow forever, especially not the world’s biggest companies, especially not at the rate of nimble, promising startups. Facebook revenue is still growing at a rate double that of Twitter. A decade ago, almost no one could have imagined that Facebook would have more than 2 billion users, much less that its family of apps — Instagram, WhatsApp and Messenger — would also count members in the billions.

“Nobody knows where the top is, where that growth slows down,” said Phil Bak, CEO of Exponential ETFs and a former managing director of the New York Stock Exchange who said he’s been warning investors of a potential sell-off in large tech stocks.

Things could get rougher still. Those European privacy regulations, known as the General Data Privacy Regulation, or GDPR, went into effect with just one month left in the second quarter. That means Facebook could feel its effects more strongly later this year.

For more than a year — ever since Zuckerberg published a 5,000 word manifesto arguing that Facebook needs to make the world a better place by bolstering civic engagement and addressing social ills — the company has seemed torn between its philosophical mission and its economic one. Wednesday may have been the first time this tension really broke into the open, probably because it threatened the one thing all investors care about: Money.

Michael Connor, whose Open Mic group helps investors push tech companies to address privacy, abuse and other issues, said it’s “far too early” to see if Facebook’s efforts to improve itself will prove fruitful. But the real question, he said, is whether the company can “continue to do what they are doing in the face of criticism from Wall Street.”

Siva Vaidhyanathan, a media studies professor at the University of Virginia and author of the new book, “Antisocial Media: How Facebook Disconnects Us and Undermines Democracy,” dismissed the significance of the stock plunge.