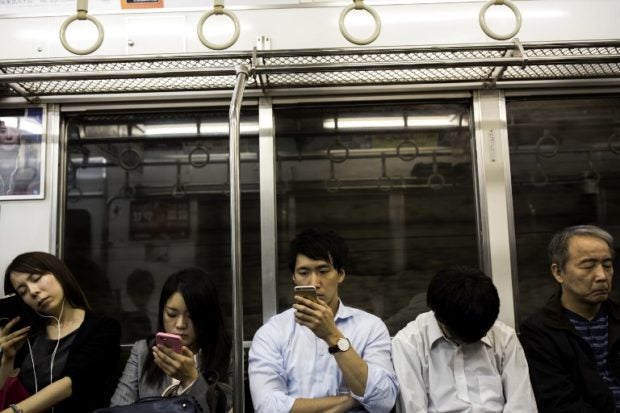 Japanese commuters check their smart phones in a subway in central Tokyo on October 12, 2016. AFP

TOKYO, Japan – Japanese office workers hoping to nod off on the job may need to sleep with one eye open thanks to a new system that can detect snoozers and blast them with cold air.

Air conditioning manufacturer Daikin and electronics giant NEC said Thursday they have begun trialing the system, which monitors the movement of the employee’s eyelids with a camera attached to a computer.

The computer can automatically lower the room’s temperature if it detects dozing at desks.

“We hope to introduce this system commercially in 2020,” a Daikin spokesman told AFP, adding that a trial began this month.

It was developed after an initial study done by the companies on how best to keep people alert.

They tried lowering temperatures by a few degrees, increasing brightness and spraying aromas in a room while participants did simple maths for about an hour.

“Our study proved that lowering temperature is effective… especially when the early signs of sleepiness are detected,” the companies said in a joint statement.