Will AI take away your job? 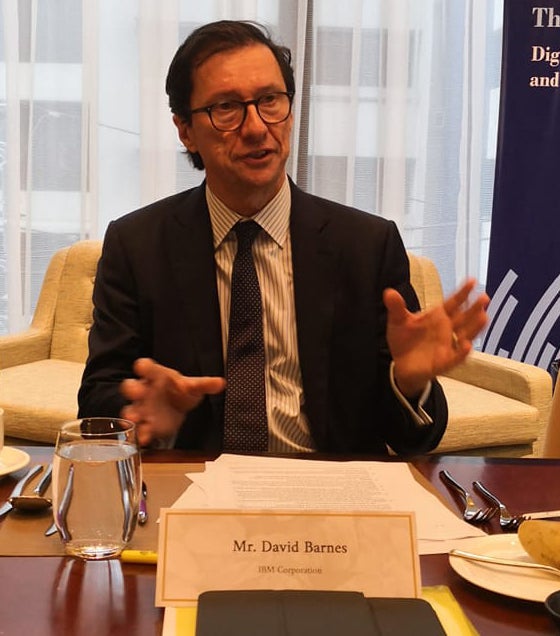 David N. Barnes, Vice President of Global Workforce Policy at IBM, discusses AI and the future of work in a media roundtable in Manila on July 26, 2018. PHOTO by Eden Estopace/INQUIRER.net

Doomsday scenarios have been floated around for years, but machines replacing people in the workforce have not happened yet and will not likely happen, according to executives at IBM.

In a media roundtable discussion on Thursday, David N. Barnes, Vice President of Global Workforce Policy at IBM, said artificial intelligence (AI) and other new technologies would destroy some jobs, but it will also create new ones.

The Big Blue, of course, is coming from a perspective of abundance. Barnes disclosed that the company has 360,000 employees worldwide and still growing. Across the tech world, it’s not just IBM that has tens of thousands of unfilled jobs and talking more of “skills shortage” rather than “job shortage.” Even the local IT-Business Process Outsourcing (IT-BPO) industry is serious about addressing the issue of manpower shortage.

Barnes, however, acknowledged that even with their optimistic projection of job market growth, 100 percent of jobs would indeed change.

“These changes will be not be monolithic. It’s not going to happen all at once. It’s going to affect different regions, different business sectors, different companies and different jobs at different times and at different levels of intensity because there are many factors that affect the adoption of technology,” he said.

One of the buzzwords in the tech industry today is artificial intelligence (AI) or machine intelligence. Simply put, Barnes said it is about high-performance computing that augments human capacity.

“When you think AI what do people think? Robots,” Stephen Braim, Vice President Government & Regulatory Affairs at IBM Asia-Pacific, explained. “Those myths propagated in the ’60s and 70s, that’s not the AI we are talking about.”

While different applications are now being deployed across industries. Barnes said there are social and cultural factors to technology adoption or factors that slow or speed up the adoption cycle.

“So not everyone is going to be affected at once,” Barnes said. “That’s why we say that it (disruption in the workforce) is not going to be a big crashing wave that we should be fearful of.”

But it is important to remember, he added, that 100 percent of jobs will be touched or augmented in some way by artificial intelligence over time.

“So everyone’s skills will have to be updated, improved, changed in some way,” he said.

“If we can better align our employee skills with new opportunities, that’s going to sustain longer job prospects, and it will also mitigate any anxiety that they have about their future and their ability to succeed in the new world of work,” he added.

However, he said the reality is that spending on worker education and training has been declining over the last two years.

Braim emphasized that there is an element of responsibility on the part of companies and even governments to make sure that employees have the right skills for the new world of work.

This values-based approach to mitigating the effects of AI rests on the mantra of “protecting the worker, not the job.”

“If we want to be good stewards as employers and policymakers, I think we’ve got three imperatives for investments. First is solving the skills equation for new, mid and late careers. Second is better equipping workers affected by digital transformations and helping them to transition to new job opportunities without them falling into unemployment. And the third is empowering employees to take charge of their careers in a very different future,” Barnes explained.

It is easy to imagine what high-tech skills are needed in the jobs of the future. Hence, the emphasis on Science, Technology, Engineering and Math (STEM) globally.

The two IBM executives, however, noted that in its hiring process, the company is placing a heavier emphasis on soft skills.

“Because soft skills are more durable, and they are stronger indicators of long-term success in employment,” Barnes explained. “We are also increasing the weight that we place on competencies and aptitudes relative to formal qualifications. In other words, how capable are you, what skills you have to do something versus what the certificate on the wall says.”

Moreover, he said they are expanding work-based learning education like apprenticeships and internships, where there is a blend of a formal classroom education along with on-the-job learning.

“This emphasis is reflective in hiring for what we call new collar jobs. We created these new collar jobs in an effort to try and fill the high-tech skills gap or in other words, to help the people without jobs find new opportunities,” he said.

Transitioning employees to new opportunities is another area that companies and governments must focus on, according to Braim and Barnes.

Here, technology can do something. Barnes mentioned an algorithm used at IBM which determines the effort required to reskill an employee to move from one job to another.

At the national level, he said technologies using predictive analytics to forecast job requirements and supply and demand in a labor market are also now available, though still in the early stages.

The bottom line is for governments to allow business the freedom to pivot and adopt new technologies in their operations, but they must protect and empower the worker to shift to new opportunities and not fall into unemployment.

Tall order? From a macro perspective, perhaps yes. From the perspective of individuals, maybe the question is how do you manage or plan a career on shifting sands? In this new world order, perhaps you can’t.