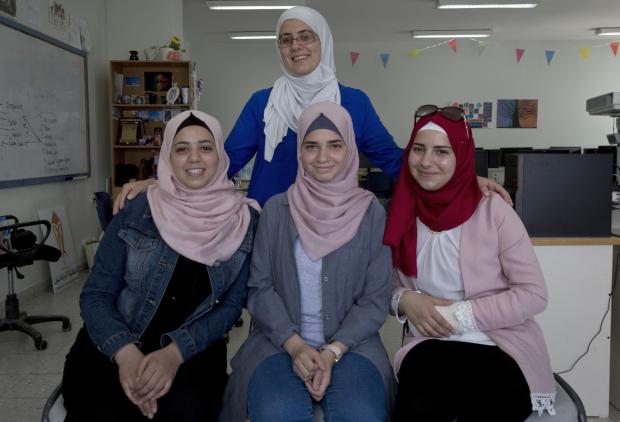 In this photo, taken Thursday, Aug. 2, 2018, Tamara Awaysa (left), 17, Wassan al-Sayyed (center),17, and Massa Halawa (right),16, pose for a photo with their mentor Yamama Shakaa in the West Bank city of Nablus. The four Palestinian high school friends are heading to California this week to pitch their mobile app about fire prevention to Silicon Valley’s tech leaders. They made it to the finals of a worldwide app competition among more than 19,000 teens. For the 11th graders from the Israeli-occupied West Bank, the ticket of admission to the World Pitch Summit signals a particularly dramatic leap because of the limited opportunities at home. (Photo by NASSER NASSER / AP)

NABLUS, West Bank — Four Palestinian high school friends are heading to California this week to pitch their mobile app about fire prevention to Silicon Valley’s tech leaders, after winning a slot in the finals of a worldwide competition among more than 19,000 teenage girls.

For the 11th graders from the Israeli-occupied West Bank, the ticket of admission to the World Pitch Summit signals a particularly dramatic leap.

They come from middle class families that value education, but opportunities have been limited because of the omnipresent Israeli-Palestinian conflict, prevailing norms of patriarchy in their traditional society and typically underequipped schools with outdated teaching methods.

Twelve teams made it to the finals of the “Technovation Challenge” in San Jose, California, presenting apps that tackle problems in their communities. The Palestinian teens compete in the senior division against teams from Egypt, the United States, Mexico, India and Spain, for scholarships of up to $15,000.

The competition, now in its ninth year, is run by Iridescent, a global nonprofit offering opportunities to young people, especially girls, through technology. The group said 60 percent of the US participants enroll in additional computer science courses after the competition, with 30 percent majoring in that field in college, well above the national rate among female US college students.

Two-thirds of international participants show an interest in technology-related courses, the group said.

Palestinian Education Minister Sabri Saidam counts on technology – along with a new emphasis on vocational training – to overhaul Palestinian schools, where many students still learn by rote in crowded classrooms.

Youth unemployment, particularly among university graduates, is a central problem across the Arab world, in part because of a demographic “youth bulge.” Last year, unemployment among Palestinian college graduates under the age of 30 reached 56 percent, including 41 percent in the West Bank and 73 percent in the Gaza Strip, according to the Palestinian Central Bureau of Statistics.

Unemployment is particularly high among female university graduates, in part because young women are expected to marry and raise children, while young men are considered the main breadwinners. However, employers also complain that graduates studying outdated or irrelevant courses often lack the needed skills for employment.

Saidam said Palestinian schools have received 15,000 computers in the last couple of years. His ministry has also established 54 bookless “smart schools” for grades one to six where students use laptops and learn by doing, including educational trips and involvement with their society.

Meanwhile, the Technovation Challenge has already been a life-changing experience for al-Sayed and her teammates, Zubaida al-Sadder, Masa Halawa and Tamara Awaisa.

They are now determined to pursue careers in technology.

“Before this program, we had a vague idea about the future,” said al-Sayed, speaking at a computer lab at An Najah University in her native Nablus, the West Bank’s second largest city. “Now we have a clear idea. It helped us pick our path in life.”

The teens first heard about the competition a few months ago from an IT teacher at their school in a middle-class neighborhood in Nablus, where IT classes are a modest affair, held twice a week, with two students to a computer.

The girls, friends since 10th grade, each had a laptop at home though, and worked with Yamama Shakaa, a local mentor provided by the competition organizers. The teens “did everything by themselves, with very few resources,” said Shakaa.

The team produced a virtual reality game, “Be a firefighter,” to teach fire prevention skills.

The subject is particularly relevant in some parts of the Palestinian territories, such as the Gaza Strip, where a border blockade by Israel and Egypt – imposed after the takeover of the Islamic militant group Hamas in 2007 – has led to hours-long daily power cuts and the widespread use of candles and other potential fire hazards.

The teens now hope to expand their app to include wildfire prevention. They will also present a business and marketing plan at the California pitching session.
After the competition, they will give the app to the Palestinian Education Ministry for use in schools.

“This prize has changed our lives,” said al-Sayed. /atm