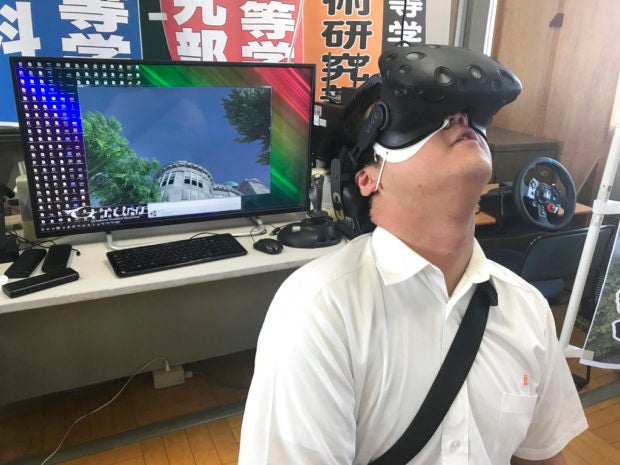 In Friday, Aug. 8, 2018, photo, Namio Matsura, 17-year-old member of the computation skill research club at the Fukuyama Technical High School, watches Hiroshima city before atomic bomb fell in virtual reality experience at the high school in Hiroshima, western Japan. Although it’s impossible to relive a moment in history, a group of the students have recreated the moment an atomic bomb dropped over the city through VR to portray the livelihood of people that was taken away as a result of the bombing. (AP Photo/Haruka Nuga)

Fukuyama, Japan — A group of Japanese high school students has been painstakingly producing a five-minute virtual reality experience that recreates the sights and sounds of Hiroshima immediately before, during and after the U.S. dropped an atomic bomb on the city 73 years ago Monday.

By transporting users back in time to the moment when a city was turned into a wasteland, the students and their teacher hope to ensure that something similar never happens again.