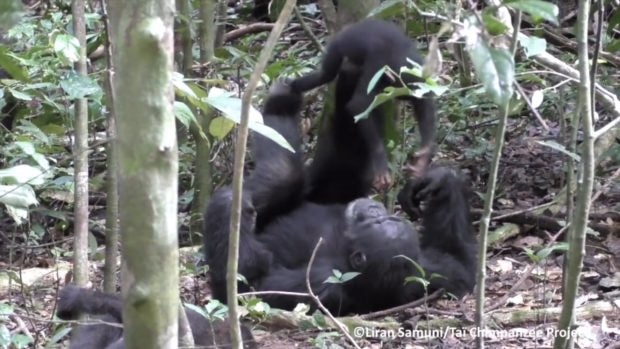 An adult chimpanzee playing the “airplane game” with a baby chimp has charmed internet users by how similar they are to humans.

The footage was uploaded on YouTube on Aug. 8 by researchers from the Tai Chimpanzee Project, a research group currently following three habituated neighboring chimpanzee communities with a total of some 100 individuals. The research group operates in the Taï National Park in Côte d’Ivoire, West Africa.

In the short, 37-second clip, an adult chimpanzee can be seen lifting an infant with its hind legs to simulate flying. Those who have experienced caring for babies may recognize the action as the “airplane game.” The adult chimp then embraced the infant by the end of the clip, and the two chimps warmly roll around on the ground.

The scene proved to be quite charming that a researcher can be heard giggling in the background while they recorded the bonding moment from afar.

Chimpanzee DNA is 98.5 percent identical to human DNA. They are smart, social animals who also use tools like sticks to fish out termites from mounds. They live to be over 50 years old and care for their offspring for years. Despite efforts, chimpanzees are in danger of extinction, according to the World Wildlife Fund. Chimpanzees have already disappeared from four countries and the remaining populations are losing their natural habitat due to deforestation.

Perhaps seeing a glimpse of daily chimpanzee bonding times through this video could help promote awareness for the sad plight of humankind’s genetic cousin.  /ra