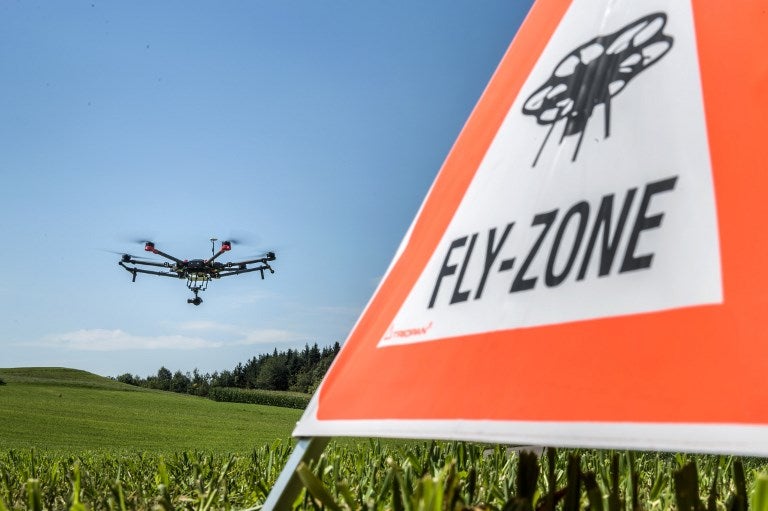 A drone flies near a sign reading ‘Fly zone’ during a press presentation of Swiss disaster dog association Redog on combined search and rescue with drones and dogs outside Zurich on August 23, 2017. The increasing popularity and availability of drones have spurred growing fears of these gadgets being used as weapons. AFP FILE

PARIS, France – From hand-held copters that zoom around the living room to high-speed craft offering the sensation of flying over the countryside, drones have won over legions of fans — and are proving a growing challenge for security authorities.

Experts say models readily available on the market can easily be turned into a “poor man’s weapon”, a remote-controlled bomb or a means of filming a site in preparation for an attack.

“This is going to be the weapon of choice for those who feel that they are technically outmatched in other areas,” said Todd Humphreys, an engineering professor at the University of Austin in Texas who specializes in drone research.

Already the list of worrying incidents and close calls is long.

The latest was on August 4 when two explosive-laden drones were allegedly used in an attempt to kill Venezuela’s President Nicolas Maduro as he gave a speech in Caracas.

And last week, President Emmanuel Macron’s security services jammed a drone’s navigating signals as it flew near his vacation retreat, sending it crashing into the Mediterranean.

An inquiry has been opened, with police divers trying to recover the craft.

Other high-profile scares saw a drone crashing onto a stage near German Chancellor Angela Merkel in 2013, and two years later, the White House went on lockdown after a drone foiled radar systems and landed on the lawn.

“I believe that this is a trend, and heads of state will need to be very cautious about giving outdoor speeches or outdoor rallies unless they’re sure they can defend themselves against an attack of one or more drones,” Humphreys said.

Environmental activists have launched them at nuclear power plants in France, and such threats have prompted the installation of drone-blocking capabilities at key US nuclear sites.

A Japanese man was convicted in 2016 for landing a drone carrying a bottle of radioactive sand from the Fukushima disaster site on the roof of Prime Minister Shinzo Abe’s office.

Faced with such risks, officials are testing and deploying equipment including frequency jamming gear, nets and even intercepting eagles.

“We have a strategy of surveillance, inquiry and material testing,” said Colonel Jean-Francois Morel of France’s gendarme police force, who said 400,000 civilian drones were sold in the country last year.

Strict operating rules are also in place in France, including a ban on their use in cities, and an online map which shows all areas that are off limits — including Macron’s holiday retreat at Bregancon.

Starting next year, any drone weighing more than 800 grams (1.8 pounds) must be registered with French authorities.

But experts see shortcomings in the current defense strategies.

“It is very difficult to hit a drone that is coming at high speed, at 100 km/h (70 mph), and it’s not hard to build drones that do that,” Humphreys said.

“Even if you could hit one drone that came in at high speed, what if five or 10 of them attacked you all at once?”

Other risks include an intercepted drone falling in an urban area, or crafts that are modified to ignore ground-based signals on the last stage of an attack, rendering jamming gear useless.

Eagles?
Stationing sharpshooters at all sensitive sites could also prove impracticable — and costly.

Prisons, in particular, are taking seriously the use of drones to deliver illicit packages to inmates or to scout out a means of breaking people out.

French officials believe this is how career criminal Redoine Faid was sprung so quickly from prison in July by armed accomplices using a helicopter — he is still on the run.

It was later revealed that no net had been stretched across the main courtyard at the prison to prevent airborne entry.

As for training eagles to snatch rogue drones, the French air force program was inspired by a similar effort in The Netherlands.

But Dutch officials said in December they were dropping the project after the birds were deemed too expensive and too unruly to be effective. /cbb