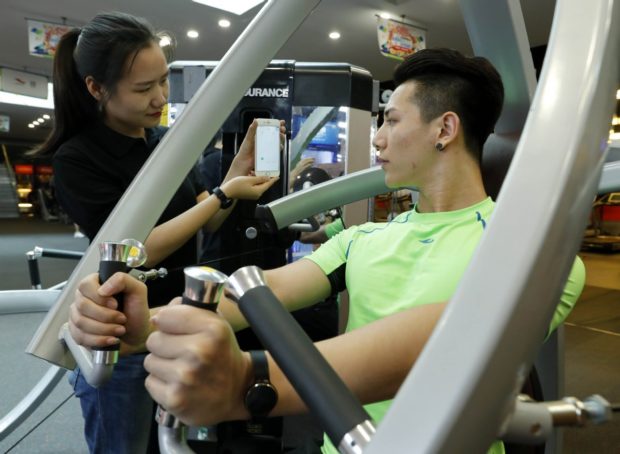 A man looks at data displayed by a mobile phone app, which tracks the time and energy consumed while he does exercise in a gym in Beijing. XINHUA PHOTO VIA CHINA DAILY

BEIJING — Jin Chi, a 28-year-old white collar worker in Beijing, wakes up at 6 am every day. Wearing his smartwatch equipped with Codoon, a GPS-supported app that keeps track of his route and time, Jin runs for 40 minutes, a habit he has kept up for three years.

In the evening, Jin uses Keep, another mobile exercise app that instructs him in his personal strength training program.

“I use Keep for one hour every day, seven days a week,” said Jin. “I can’t live without the app now.”

“After using mobile fitness apps, I seldom go to the gym. Using mobile apps to do sports is more flexible,” he said. “I can enjoy extensive strength training or a yoga course whenever and wherever I want to.”

Jin is just one example of how people today are increasingly relying on online products to support their sporty lifestyles.

A report from Beijing-based market research consultancy Analysys showed that by April this year, the number of active users on such online platforms had reached 68.48 million in China, growing 2.22 per cent year-on-year.

Online apps in the walking, running and fitness categories grab the most traffic among users, accounting for 34.27 per cent, 33.99 per cent and 18 per cent respectively, the data showed. Guangchangwu, or square dancing, cycling and yoga also represent a considerable proportion.

“We have now entered an era in which the number of internet users will not jump dramatically,” said Chen Qiaoshan, a medical analyst at Analysys. “Traffic in the online sports sector will experience a moderate increase, and enterprises must compete to win the market.”

She said users in different sports categories have diversified demands for apps’ functionality. While fitness enthusiasts value how the online apps track their sports data and plan out their training, those who aim to lose weight mainly rely on the apps to serve as a private tutor to guide, encourage and accompany them during training, Chen said.

Helen Yang, who took part in a 1,699 yuan ($250) online weight reduction course for 45 days, said she liked the flexibility that the online course offered.

“The online course costs less than hiring a private sports trainer in a gym. In addition, users that take part in the same course have a virtual space for chatting. We talk about fitness topics often, and encourage each other in losing weight. The course has social features,” Yang said.

“For online fitness, users are more active during summer than they are in winter,” Chen said.

The report from Analysys found that for the whole of 2017, the average daily usage time was around 0.5 hour. In July that year the average usage time reached 77 minutes. The peak times are usually the morning and evening.

The National Development and Reform Commission said at a news conference on Aug 2 the nation’s sports industry had continued its rapid development this year, becoming a new driver for economic development.

The added value of the sports industry is estimated to account for more than 1 per cent of the nation’s GDP this year, with related consumption reaching 1 trillion yuan, said Ou Xiaoli, director of the social development department at the NDRC.

There will be 20 percent growth in the number of sports institutions established, and the whole industry is expected to employ 4.4 million workers this year, according to Ou.

“The sports industry will play an increasingly significant role in promoting consumption, benefiting the public and stabilizing economic growth,” he said.

According to a spokesperson from CCTV-5, China Central Television’s sports channel, the channel attracted 27.8 billion online visits during the past 2018 World Cup in Russia, showing the great potential in the online sports market.

Chen from Analysys predicted that online sports users will pay more attention to medical health in the future.

“Our statistics show that online sports app users are more willing to spend money in healthcare.

“In addition, with technological advances in virtual reality and augmented reality, more content will be developed for the industry, in areas such as education, entertainment, personalized training and smart equipment,” she said.