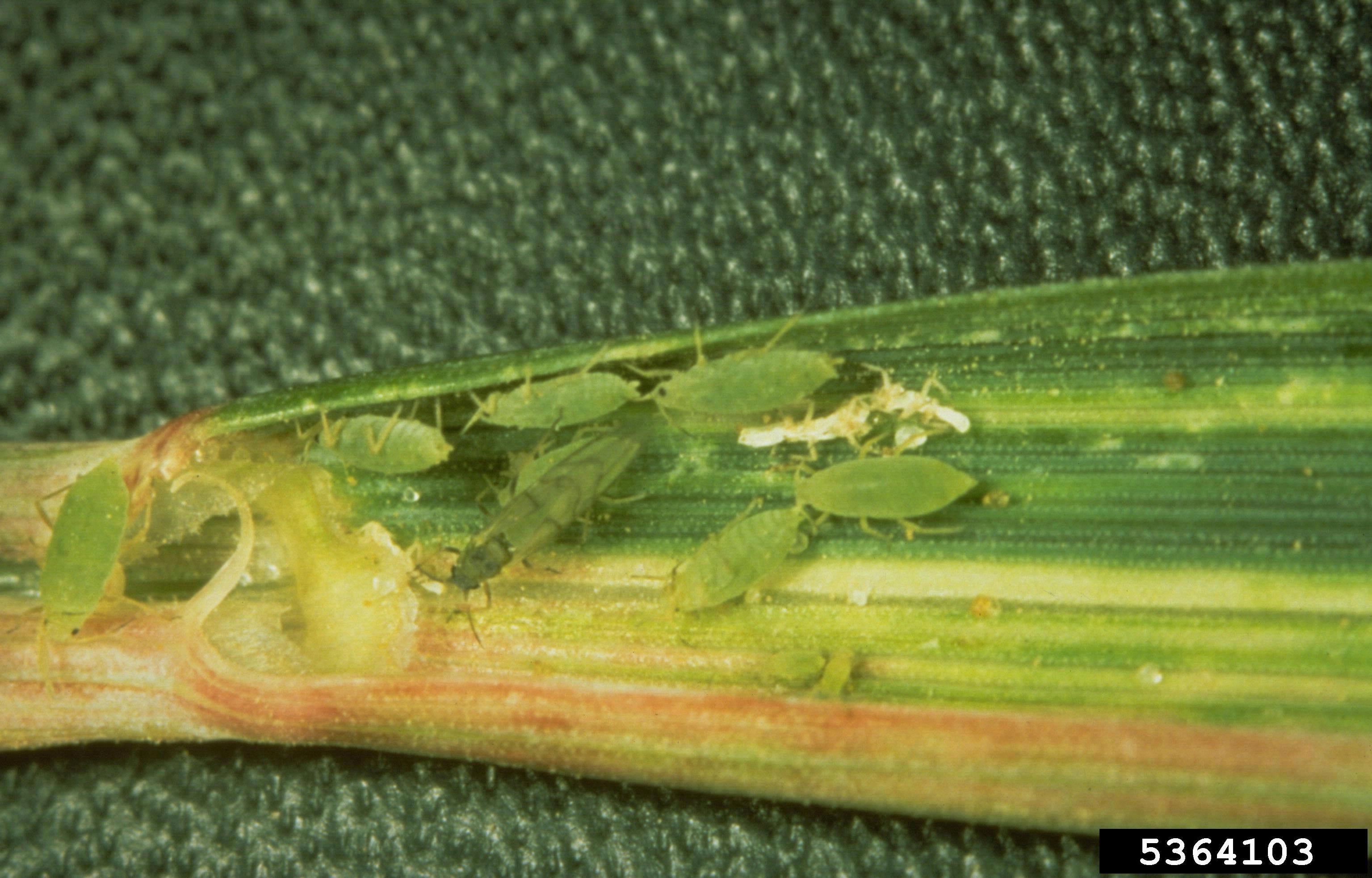 This undated image made available by Frank Peairs in 2008 shows a colony of Russian wheat aphids in a wheat leaf. A warmer world likely means more and hungrier insects chomping on crops and less food on dinner plates, a new study suggests. (Frank Peairs/Colorado State University/Bugwood.org via AP)

Insects now consume about 10 percent of the globe’s food, but that will increase to 15 to 20 percent by the end of the century if climate change isn’t stopped, said study lead author Curtis Deutsch, a University of Washington climate scientist.

The study looked at the damage bugs like the European corn borer and the Asiatic rice borer could do as temperatures rise. It found that many of them will increase in number at key times for crops. The hotter weather will also speed up their metabolism so they’ll eat more, the researchers report in Thursday’s journal Science . Their predictions are based on computer simulations of bug and weather activity.

“There’s going to be a lot of crop loss, so there won’t be as much grain on the table,” said study co-author Scott Merrill, an ecology professor at the University of Vermont.

The researchers calculate additional losses of 53 million tons (48 million metric tons) in wheat, rice and corn from hungry bugs if the temperature rises another 2.7 degrees (1.5 degrees Celsius) from now. The study estimates that in that warmer scenario, American corn, wheat and rice losses from insects will jump by a third above current levels. Bug damage to Russia’s rice crop would jump sixfold. And nine countries — North Korea, Mongolia, Finland, Kyrgyzstan, Georgia, Bhutan, Armenia, the United Kingdom and Denmark — would see at least a doubling of wheat loss from bugs.

If there are no drastic cuts in emissions from coal, oil and gas, the world will reach that 2.7 degree mark and extra insect loss around 2050 — give or take a decade or so, Deutsch said.

“In the history of agriculture, one of the most important themes is the continuing struggle between farmers and insects,” said Stanford University environmental institute director Chris Field, who wasn’t part of the study. “Based on this study, climate change tilts the balance in the insects’ favor.”

The Russian wheat aphid is a good example because “the populations are absolutely insane … they are born pregnant,” Merrill said. “If you increase the temperature a couple degrees you can see the population growing much faster.”

The researchers acknowledge that richer countries may be able to reduce projected losses with insecticides and other pest-fighting techniques.

The study comes as insect experts across the globe worry about declining numbers of flying insects, especially beneficial pollinators like bees and moths. But while many insects may be declining for a variety of reasons those associated with agriculture crops — especially invasive species — seem to be doing better, said University of Delaware’s Doug Tallamy, who wasn’t part of the study, which he considered too broad.
University of Illinois entomologist May Berenbaum, called the study distinctive.

“Problem insects are expanding their ranges with climate warming,” she said in an email.

Another study in the journal looked at how the world’s vegetation changed since the last ice age and applied that concept to current warming. The study logged massive changes to Earth’s landscape around the globe over more than 14,000 years from the last glacier period.

The same magnitude of warming — more than 7 degrees (4 degrees Celsius) — is projected to occur with human-caused climate change, but may be in only 100 years or so, said study co-author Jonathan Overpeck, a University of Michigan climate scientist.

“It really paints a picture that is a lot more dire,” Overpeck said, calling it “vegetation chaos.” /muf