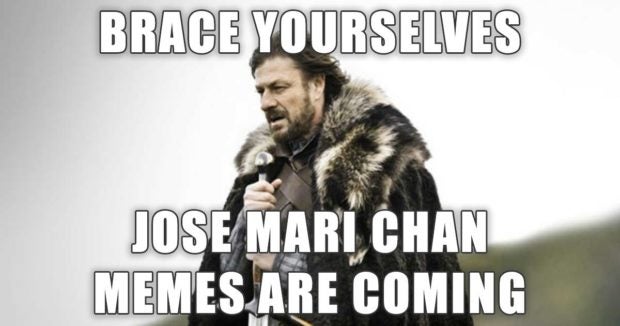 It’s that time of year again, and the Jose Mari Chan memes have once again invaded the recesses of the internet. It’s least surprising, as a lot of Filipinos have associated the beginning of Christmastime with September; for some odd reason, it also appears to be the month when Chan’s iconic Christmas songs get blared from speakers just about anywhere. But who’s complaining?

Unknown it may be as to how or when this “tradition” started, perhaps these netizens’ speculations of such can help in cracking this Yuletide mystery.

A certain Larry (@taongbalai) took to Instagram last Sept. 2 to offer his take on the matter, speculating that perhaps, it was all down to fate. The netizen shared a picture of figurines of Joseph and Mary riding atop a donkey.

In the picture, Mary’s hand can be seen resting on top of her pregnant belly. The figurines were then labeled, “Jose Mari Chan”.

“Now I understand,” wrote the netizen.

But if the first theory doesn’t convince, then perhaps actor Luis Manzano’s mathematical explanation may help.

In the infographic, the number of letters in Chan’s name were added together, which equates to 12. December, as known, is the twelfth month of the year.

Then, the letters in Chan’s name were added based on the number of their sequence in the alphabet. This equates to 116. Sept. 1, which pertains to the date Chan’s songs are played every year, equates to 91, as September is the ninth month of the year, while 1 stands for the day. Then, 91 was subtracted from 116, totaling 25. Thus, Dec. 25.

On another note, if Greenday frontman Billie Joe Armstrong wants to be woken when September ends, then it’s best believed that Chan may need waking every Sept. 1.

A certain Emil (@masterofnah) shared a two-panel meme of Armstrong and Chan mashing the lyrics of “Wake Me Up When September Ends” and “Christmas in Our Hearts” together.

Edwin Lacierda, former member of the Philippine Cabinet and Presidential Spokesperson of President Benigno “Noynoy” Aquino III, also joined in on the memery.

Lacierda took to his Twitter page last Aug. 31 to share a meme of Chan, bearing the words, “Kontrolado ko lahat ng speakers sa mall.” (I control all the speakers in the mall.)

“At the stroke of midnight, on the first day of September, welcome one and all to the Ber months,” wrote Lacierda. “And most especially, let us welcome Jose Mari Chan in our hearts. Pasko na (It’s Christmas)!”

At the stroke of midnight, on the first day of September, welcome one and all to the Ber months and most especially, let us welcome Jose Mari Chan in our hearts :) Pasko na! #CountdownToChristmas pic.twitter.com/8yuOquZc3I

Social media personality Bogart the Explorer, on the other hand, shared a meme of Chan last Sept. 1. The meme showed a grinning Chan smiling at the camera, with the photo bearing the words “IT’S TIME.”

“Bears hibernate for up to seven months,” wrote Bogart the Explorer (@BogartDexplorer). “Jose Mari Chan hibernates up until the Ber months.”

Bears hibernate for up to seven months. Jose Mari Chan hibernates up until the Ber months. 👍🏻 pic.twitter.com/ZMZID3447g

A certain Jay-r (@cayrjortes) took to Twitter last Sept. 3 to call for a petition that would declare Sept. 1 as “National Jose Mari Chan Day.”

“Petition to declare September 1 as National Jose Mari Chan day because WHY THE HELL NOT DON’T YOU REMEMBER THE CHILD IN THE MANGER AS HE SLEEPS WHENEVER YOU SEE BOYS AND GIRLS SELLING LANTERNS ON THE STREETS???”

Petition to declare September 1 as National Jose Mari Chan day because WHY THE HELL NOT DON'T YOU REMEMBER THE CHILD IN THE MANGER AS HE SLEEPS WHENEVER YOU SEE BOYS AND GIRLS SELLING LANTERNS ON THE STREETS???

Musician and poet Dong Abay, on the other hand, tweeted on Sept. 1 that Jose Mari Chan’s more famous than, well, Jesus Christ himself.

In the Philippines, Jose Mari Chan is more popular than Jesus Christ.

Meanwhile, journalist Jeff Canoy seems to have acclimatized to the pomp and noise surrounding Chan and September, by taking to Twitter last Sept. 1 with a dare: “Bring it on, Jose Mari Chan.”

Bring it on, Jose Mari Chan.

When it comes to Christmas, it’s palpable that the Philippines celebrates seriously, and Chan’s tunes make the festive mood all the merrier. Is it too early to say Merry Christmas? JB

Christmas in our hearts