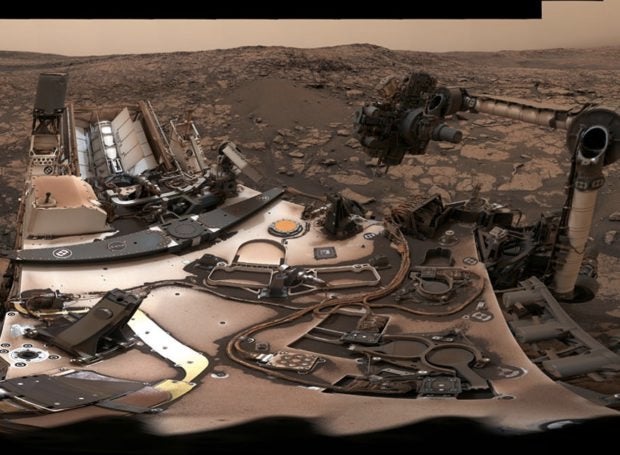 NASA’s Curiosity Rover found time to take a panoramic selfie on Mars while going about its scientific mission of exploring Earth’s neighboring planet.

The photo was taken on Aug. 9 after Curiosity picked up a new rock sample from Vera Rubin Ridge. The rover then surveyed its surroundings and produced a 360-degree panoramic image, itself included in the frame, according to a statement.

NASA described it as a rarity to see the rover in the snapshots it takes and sends back to Earth. The panorama showed the rover’s main body covered with a light sprinkling of Martian dust.

The panorama also showed umber skies and signs of a global dust storm at the horizon.

Apart from taking in the Martian view, Curiosity recently tried a new drilling technique to sample some particularly hard rocks. With no way to install new equipment on the rover, NASA scientists had to think creatively on how to make the most of what the rover had on hand. Unfortunately, the rock samples on the Vera Rubin Ridge continued to hide their secrets.

After its short “selfie break,” Curiosity will follow up with two more drilling samples for September. It will then climb up higher on Mt. Sharpby early October.  /ra

Stephen Hawking’s project in search of E.T. gets boost from new technology