Wedding proposal in ‘Spider-Man’ game to be patched out 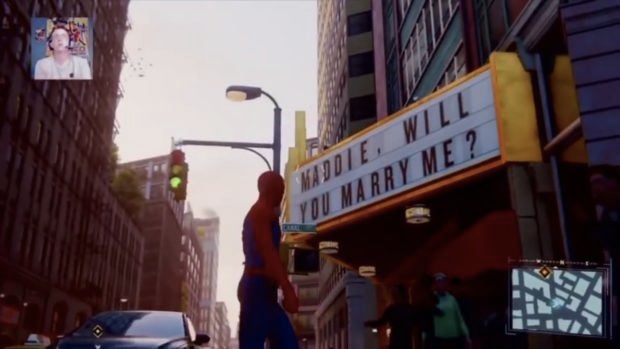 A wedding proposal added as an Easter egg in the video game “Marvel’s Spider-Man” will be removed in an upcoming patch following the sour development in the couple’s relationship.

The line “Maddie, will you marry me?” on a theater marquee inside the game will be replaced on account of the couple’s breakup before “Spider-Man” came out on Sept. 7 for the PlayStation 4.

Insomniac Games, the studio behind “Spider-Man,” will replace the text with the name of the man’s grandmother, who gave him his first “Spider-Man” comic, reports Kotaku.

On May 11, 2018, Tyler Schultz reached out to Insomniac Games through a tweet. In a long shot he asked whether the developers could include his proposal to his then girlfriend Madison Gamble into the game. 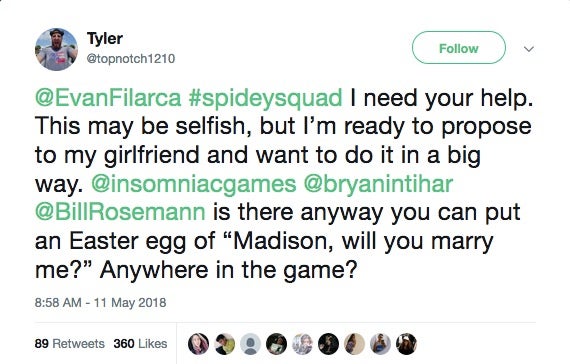 The game development team decided to help Schultz out and included the line “Maddie, will you marry me?” on a theater marquee after making sure Gamble would still be around to read it. Unfortunately for the couple, the relationship had been going through some rough patches and eventually led to a breakup. 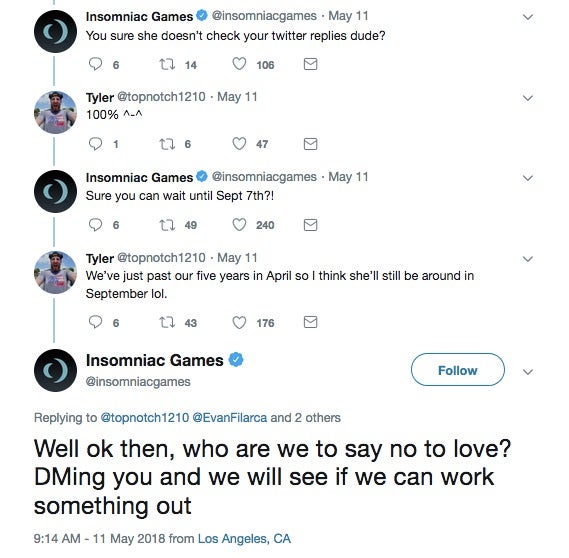 A sleepless-looking Schultz announced the breakup through a YouTube video uploaded on Sept. 9 after giving an explanation as to what the Easter egg meant.

Gamble later shared her side of the story with Houston Press after seeing the initial coverage by Kotaku.

“Our relationship turned into a mother and son relationship where I had to remind him about things,” said Gamble.

Gamble also expressed that she never liked video games in the first place and would not have been too thrilled with Schultz’s idea.

While both parties acknowledged the struggles their relationship went through, Gamble lamented how she got painted as the “bad guy” for breaking up with Schultz and was even harassed on social media. She specified hurting him was not the intent.

After the breakup, Schultz asked his half-brother to check up on Gamble. Schultz’s half-brother and Gamble became close afterwards and a relationship eventually took form. Gamble specified she had never been unfaithful to Schultz, according to the report.

In the end, Gamble hoped Schultz would eventually move on and find happiness since it’s exactly what she’s trying to do.  Alfred Bayle /ra