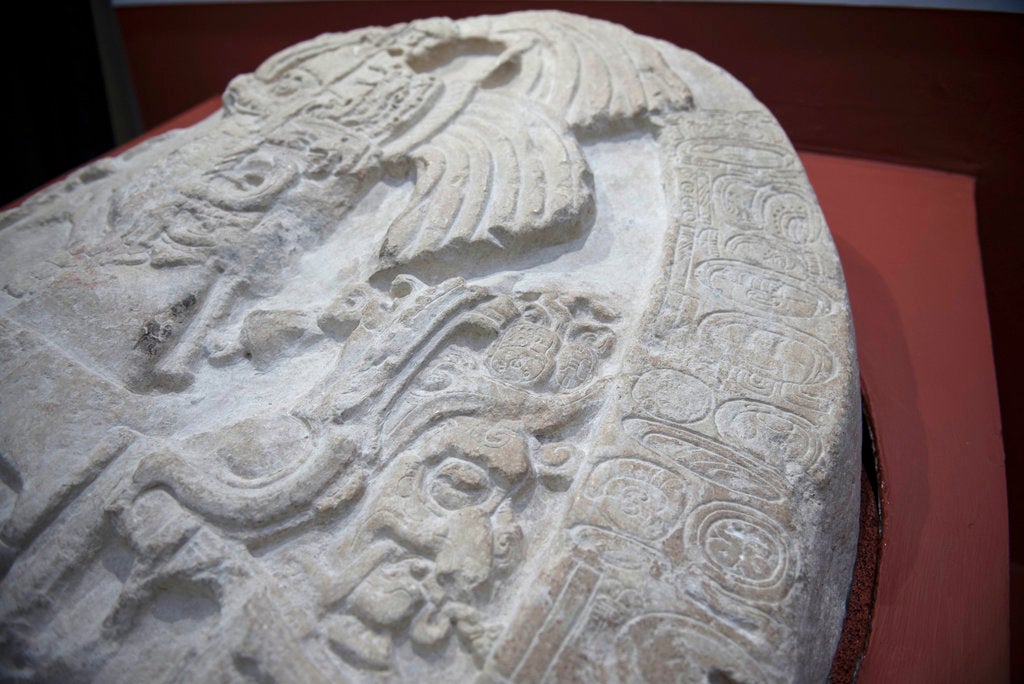 A nearly 1,500-year-old carved altar from the Maya site “La Corona,” located in the northern Guatemalan department of Peten, is displayed at the National Museum of Archaeology and Ethnology in Guatemala City, Wednesday, Sept. 12, 2018. Archaeologists in charge of the investigation say that it is the oldest monument found to date in this site of the Classic Maya period. (AP Photo/Oliver de Ros)

GUATEMALA CITY — An altar found at Guatemala’s La Corona site suggests the Mayan dynasty of Kaanul, known as the Snake Kings, acted like its namesake in slowly squeezing the rival kingdom of Tikal, archaeologists said Friday.

A team led by Marcello Canuto of Tulane University uncovered the carved stone altar in the northern Peten region near the Mexico border.

When it was first found in 2017, the altar was encased in the roots of a tree in a collapsed temple. It took a year to painstaking pry the massive stone slab from the roots, fully excavate it and move it to Guatemala City, where it was presented this week at a museum.

The altar is dated A.D. 544 and depicts the Tikal ruler Chak Took Ich’aak conjuring two local gods from a shaft in the form of a snake. 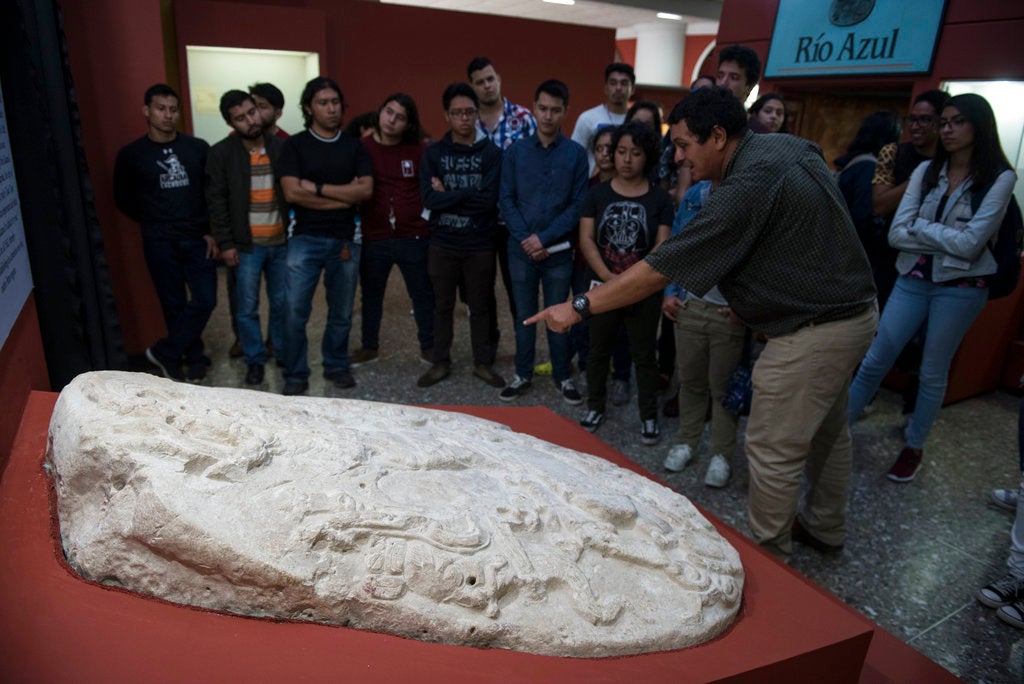 Visitors watches a nearly 1,500-year-old carved altar from the Maya site “La Corona,” located in the northern Guatemalan department of Peten, at the National Museum of Archaeology and Ethnology in Guatemala City, Wednesday, Sept. 12, 2018. Archaeologists in charge of the investigation say that it is the oldest monument found to date in this site of the Classic Maya period. (AP Photo/Oliver de Ros)

The same man appears 20 years later as a vassal of the Kaanul dynasty and the ruler of the larger, nearby city of Peru-Waka. But the gods associated with him are different local deities associated with that place.

Canuto said the altar suggest Kaanul’s eventual victory was the result of decades of astute politicking and cultural appropriation, not just battles.

Chak Took Ich’aak and his son “are trying to show that they are praying or conjuring up gods that were there way earlier to give them that kind of legitimacy,” Canuto said. “It’s almost like they’re setting up franchises, but using the same recipes of local gods, claiming they had access to local deities. There’s an attempt to render this whole process legitimate by appealing to local interests.”

A princess from the Kaanul dynasty — based in Dzibanche and later Calakmul, in neighboring Mexico — had been married into the La Corona ruling family two decades before.

It’s unlikely that La Corona could have simply conquered El Peru, which was much more powerful, unless it had backing from someone even more powerful.

“This would be equivalent to Cuba defeating the United States in a war. They could only have done that … if they had had the backing of the Soviet Union,” Canuto said.

The enormous city-state of Tikal, whose towering temples still stand in the jungle, battled for centuries for dominance of the Maya world with the Kaanul dynasty. Just a few decades after the altar was carved, Kaanul apparently defeated Tikal by amassing a string of allied cities that encircled and eventually strangled Tikal. The symbol of the Kaanul dynasty were stone masks carved in the form of grinning snakes.

Francisco Estrada-Belli, a Boston University archaeologist who was not involved in the La Corona discovery, said: “Its broader significance is that it shows the behind-the-scenes … machinations of the Snake Kings as they are expanding their empire in the direction of Tikal.”

“Not long ago, we thought the victory over Tikal was the result of a sort of out-of-the-blue blitz,” Estrada-Belli said. “It is fascinating to learn more about how Maya empires expanded, just like in the ‘Game of Thrones.'”

Tomas Barrientos, an archaeologist at the University of the Valley of Guatemala noted that “for several centuries during the Classic period, the Kaanul kings dominated much of the Maya Lowlands,” until the Maya civilization collapsed for reasons that still aren’t clear.

“This altar contains information about their early strategies of expansion,” Barrientos said.  /muf