Report: Machines to handle over half workplace tasks by 2025 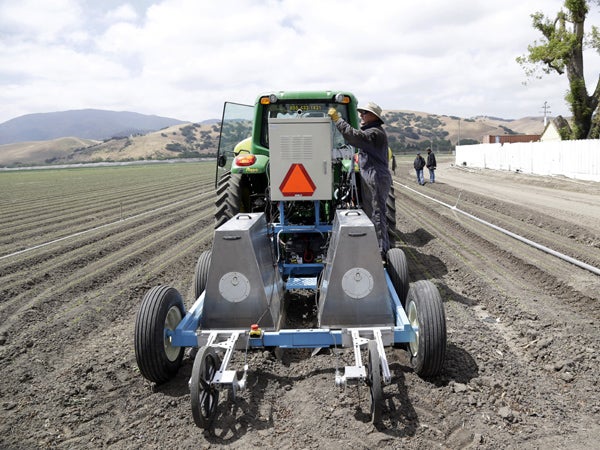 In this May 23, 2013 photo, field operations manager Matthew Rossow tests the lettuce bot in Salinas, Calif. In the Salinas Valley, the lettuce capital of the world, entrepreneurs with the Silicon Valley company Blue River Technology are testing the Lettuce Bot, a boxy robotic machine that can thin fields of lettuce, a job that now requires detailed hand work by 20 farm workers. AP Photo/Marcio Jose Sanchez

GENEVA — More than half of all workplace tasks will be carried out by machines by 2025, organizers of the Davos economic forum said in a report released Monday that highlights the speed with which the labor market will change in coming years.

The World Economic Forum (WEF) estimates that machines will be responsible for 52 percent of the division of labor as share of hours within seven years, up from just 29 percent today. By 2022, the report said, roughly 75 million jobs worldwide will be lost, but that could be more than offset by the creation of 133 million new jobs.

A major challenge, however, will be training and re-training employees for that new world of work.

“By 2025, the majority of workplace tasks in existence today will be performed by machines or algorithms. At the same time a greater number of new jobs will be created,” said Saadia Zahidi, a WEF board member. “Our research suggests that neither businesses nor governments have fully grasped the size of this key challenge of the Fourth Industrial Revolution.”

The “Future of Jobs 2018” report, the second of its kind, is based on a survey of executives representing 15 million employees in 20 economies. Its authors said the outlook for job creation has become more positive since the last report in 2016 because businesses have a better sense of the opportunities made possible by technology.

The WEF said challenges for employers include enabling remote work, building safety nets to protect workers, and providing reskilling for employees. However, the report found that only one in three respondents planned to reskill at-risk workers.

Despite net positive job growth, the WEF anticipates a “significant shift in the quality, location, format and permanency of new roles. Businesses are to expand use of contractors for task-specialized work, engage workers in more flexible arrangements, utilize remote staffing, and change up locations to get access to the right talent.

The report said nearly half of all companies expect their full-time workforces to shrink by 2022, while nearly two in five expect to extend their workforce generally, and over one-quarter expect automation to create new roles in their enterprises.

Germany’s powerful DGB trade union association warned against too rapid change in the world of work.

“People, whether they’re workers or consumers, will only accept and tolerate the consequences if technology serves them — and not they it,” Reiner Hoffmann told daily Welt in reaction to the WEF report. /kga