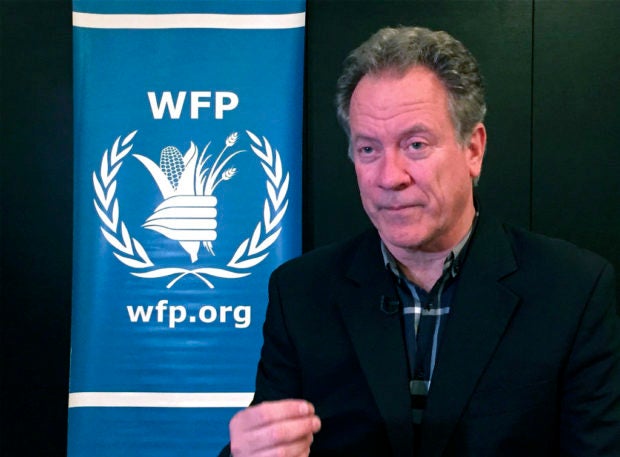 In this May 21, 2017 file photo, David Beasley, the new executive director of the World Food Programme, speaks to The Associated Press, in Amman, Jordan.  AP

LONDON — In the Za’atari refugee camp in Jordan, Amar Al-Eid heads toward the checkout of the food distribution store carrying supplies for his two children. The shopkeeper raises a black box to his face and scans the Syrian refugee’s iris. The transaction goes through and a day’s rations are secured.

The data technology that underpins virtual currencies like bitcoin is now also used to deliver aid more efficiently by dramatically lowering the risk of bribes and fraud by local officials — a huge, longstanding problem in the industry. The so-called blockchain keeps a record of all transactions and buyers, making sure recipients like Al-Eid get their goods without the added costs of graft or bank transfer fees. And donors can track the use of their aid money, all the way to the refugee family it helps survive.

“It’s a very easy process and it doesn’t have any complications,” says Al-Eid, before taking the food off to his family.

The UN’s World Food Programme  has been testing the use of blockchain technology since 2017 to manage aid for over 100,000 refugees in camps in Jordan, which hosts over 740,000 people from neighboring countries like war-torn Syria. It aims to extend it to 500,000 refugees by the end of March. Other international organizations, including the World Bank, UNICEF and the Red Cross, are looking at ways to implement blockchain into their own projects.

Blockchain is an online ledger of transactions spread across a global network of computers that use their processing power to verify any changes. It is most famous for being used to support virtual currencies like bitcoin, but can in practice be used to track any system of payments or data transfers. In the refugee aid system it is testing, the UN does not use virtual currencies but dollars. The blockchain technology helps it know where every cent is, from the moment it is donated to when it is spent on a physical good.

And that can mean huge savings.

Former UN Secretary General Ban Ki Moon has said that in 2011, some 30 percent of aid donations – around $40 billion, according to one estimate – failed to reach intended recipients because middlemen skimmed some off of top and corrupt officials often took a cut.

Ultimately, the system helps those who receive the money by making more of it available and reduces the concern among donors that their money will actually be used for the intended purpose.

“We have this rapid ability to understand where our money is throughout the process,” says Gustav Stromfelt, one of the project managers working on the WFP’s program. “It improves the transparency, accountability, and communication across the board.”

Because the data is spread across so many computers, a thief would have to take control of the entire network — potentially thousands of terminals — to fudge the numbers and make off with the money. That would require an enormous amount of computing power, so it wouldn’t be profitable.

That doesn’t mean smaller thefts can’t occur. So far in 2018, about $1 billion worth of virtual currencies backed by blockchain has been stolen, according to cybersecurity firm Carbon Black. But these thefts are typically carried out through hacks of the end users by, for example, entering the email account of a person to get their passwords to open their virtual currency accounts and take the money. The thieves do not take control of the blockchain system. It’s like comparing pickpocketing to entering a bank’s vault.

The blockchain doesn’t use middlemen like Western Union or PayPal, meaning the costs of transferring money are reduced by 98 percent for users like the WFP. That translates to savings of over $40,000 per month for the UN agency.
Smaller charities are also testing out blockchain.

Last year, the London-based homeless charity St. Mungo’s tested a blockchain platform to monitor the use of donations and prove they were being spent on improving the recipients’ lives. Only then would more donations be released.

The data can also help make aid more efficient by tailoring the service to the needs. For example, in one project in Tanzania, the blockchain system could show that a particular woman regularly visited the local doctor once a week to buy medicine for her child. So when she missed an appointment, the charity, AidTech, had a social worker bring the medicine to her the following morning.

“We’re able to show more data on the first two women using the platform than the organization could with over 10,000 women when they were using a paper-based system. That means we can be far more responsive,” said Joseph Thompson, founder of AidTech.

The system does have its downsides. In practical terms, having aid released only upon an iris scan means a busy mother, say, would not be able to ask her child to go get the aid rations for her instead.

The way the transactions are verified can also be patronizing. The blockchain aid for the homeless, for example, ensures the money is used for productive purposes like shelter rather than alcohol or drugs, implying a lack of trust that can be degrading for the receiver.

And there are broader questions about privacy rights, as the data can track the actions of individuals. While personal details like names are encrypted, the record of transactions is viewable to anyone with access to the blockchain. The issue is all the more delicate when the people tracked are vulnerable, like stateless refugees.

Some UN officials are aware of these risks, and there is a debate about whether to ramp up its use across aid and development projects.

“We will not store any sensitive personal data (on the blockchain), especially of such a vulnerable population as refugees, with a technology that still needs to prove its merits,” says Karl Steinacker, a deputy director at the UN refugee agency.

For Al-Eid, such questions are secondary while he tries to keep his family safe and nourished.

Without the donations, “people wouldn’t be able to live,” he says on his way out of the food shop. “The assistance is very good.” /ee