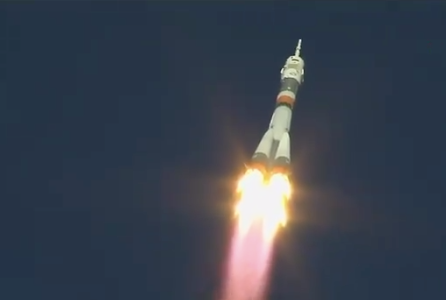 Image: Screengrab from Twitter/@NASA via Storyful

A Soyuz rocket carrying NASA astronaut Nick Hague and cosmonaut Alexey Ovchinin malfunctioned after launch from Kazakhstan on Oct. 11, requiring the two aboard to return to earth in “ballistic descent mode,” NASA said.

LIFTOFF! Shooting into the sky at 4:40am ET, the Soyuz rocket carrying @AstroHague and Alexey Ovchinin leaves Earth on a four-orbit, six-hour journey to the @Space_Station. Watch: https://t.co/BjMDNrNorR pic.twitter.com/0Cfm0Uu2Jx

NASA said the rocket, which had been bound for the International Space Station, had a problem with its booster after first-stage separation.

Ballistic descent happens at a “sharper angle of landing compared to normal,” NASA said, but the crew were said to be in good condition after touching down.

Search and rescue teams were en route to the landing location. JB