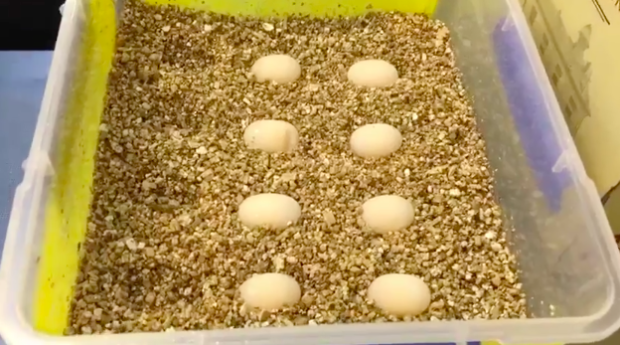 Veterinarians at the Currumbin Wildlife Hospital Foundation in Queensland, Australia were able to salvage eggs from two eastern long-necked turtles that were brought into the operating room and had to be euthanized.

Two Eastern Long Neck turtles came to us this week after suffering severe injuries after being hit by cars, they were both gravid which means they had eggs within their reproductive tracts.Tragically neither were able to be saved, but after they were humanely euthanized our amazing team carefully removed the eggs so that they could be incubated. These turtles lay about 4-22 eggs and it takes around 60-80 days for them to hatch. We keep them in an incubator in our nusery and when they hatch, we will release them back into the pond near where mum was found. It can sometimes take 24 hours for the eggs to hatch so we let the little ones rest first before release. 🐢Last year we hatched around 240 lizard and turtle eggs!! 🥚🥚This time of year turtle mums are crossing roads to get to their preferred location to lay their eggs so please watch out for them on the roads or help them cross safely.

The turtles had attempted to cross the road. However, they got hit and were critically injured by cars. Veterinarians later found they had eggs in their reproductive systems.

“These turtles lay about four to 22 eggs and it takes around 60 [to] 80 days for them to hatch. We keep them in an incubator in our nursery and when they hatch, we will release them back into the pond near where mum was found,” a spokesperson for the hospital said. “It can sometimes take 24 hours for the eggs to hatch so we let the little ones rest first before release.”

The turtles, also known as snake-necked turtles, are frequently hit by vehicles, according to the New South Wales environmental department. KM