Driverless hover-taxis to take off in Singapore 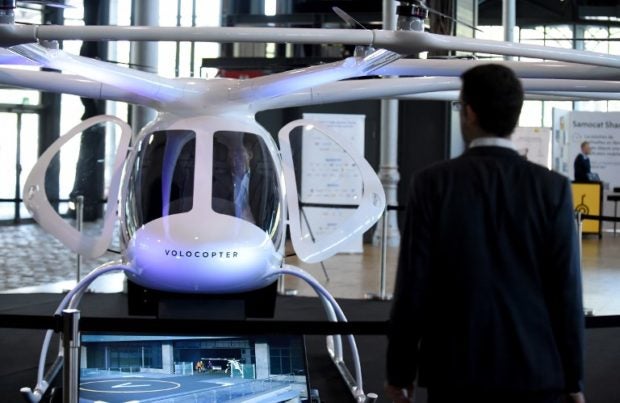 In this file photo taken on October 18, 2018, an electric Volocopter 2X by German aircraft manufacturer Volocopter, is on display during the 3rd edition of the “Autonomy and the Urban Mobility Summit” in Paris. (Photo by ERIC PIERMONT / AFP)

Test flights of a driverless hover-taxi will take place in Singapore next year, a German aviation firm said, the latest innovation to offer an escape from Asia’s monster traffic jams.

Millions of commuters in the region’s cities have to contend with chronic gridlock every day, sparking a race to develop new ways to avoid the snarl-ups.

While the developed city-state of Singapore does not suffer major congestion, it is seen as a perfect test-bed for new technologies due to its compact size and openness to innovation.

German firm Volocopter said Tuesday it will conduct the test flights in Singapore in the second half of next year with the support of the government.

Resembling a helicopter, Volocopter’s electric air taxis take off and land vertically. They are based on drone technology and can fly two people for around 30 kilometers (19 miles), the firm said in a statement.

“The Volocopter is designed specifically for inner city missions,” Volocopter said in a statement, adding it can withstand minor turbulence around skyscrapers, allowing for smooth rides.

“It is so quiet that at a flight height of 100 meters (330 feet), it cannot be heard over the typical background noise of a city.”

A company spokeswoman said the Volocopter can be controlled by a pilot using a joystick, or remotely from the ground.

Apart from the test flights, Volocopter will also set up a product design and engineering centre in Singapore to support its expansion plans.

Volocopter said they are getting ready to roll out their first fixed routes in cities.

The hover-taxis will complement helicopter-hailing services which are already taking off in some cities to beat traffic jams.