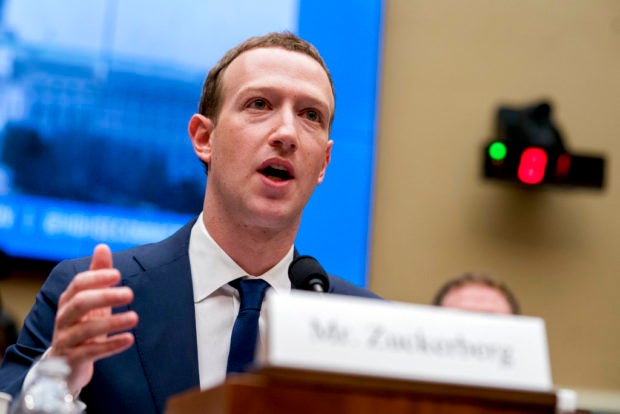 In this April 11, 2018  file photo, Facebook CEO Mark Zuckerberg testifies before a House Energy and Commerce hearing on Capitol Hill in Washington about the use of Facebook data to target American voters in the 2016 election and data privacy. AP

LONDON — Parliamentary committees in Britain and Canada on Wednesday urged Facebook CEO Mark Zuckerberg to testify before a joint hearing of international lawmakers examining fake news and the internet.

Damian Collins, the head of the U.K. parliament’s media committee, is joining forces with his Canadian counterpart, Bob Zimmer, to pressure Zuckerberg to personally take part in hearings, as he did before the U.S Congress and the European Parliament. The so-called “international grand committee” session would be held Nov. 27 and could include lawmakers from other countries.

“We understand that it is not possible to make yourself available to all parliaments. However, we believe that your users in other countries need a line of accountability to your organization_directly, via yourself,” the pair said in a letter to Zuckerberg. “We would have thought that this responsibility is something that you would want to take up.”

Collins has been irate with Facebook for sending Zuckerberg’s underlings to his committee’s hearings while the leader of the Silicon Valley company declined invitations to attend. Joining forces with Canada — and perhaps other countries — seems designed to prod Zuckerberg and persuade him to change his mind.

“No such joint hearing has ever been held,” the pair wrote. “Given your self-declared objective to ‘fix’ Facebook, and to prevent the platform’s malign use in world affairs and democratic process, we would like to give you the chance to appear at this hearing.” /ee