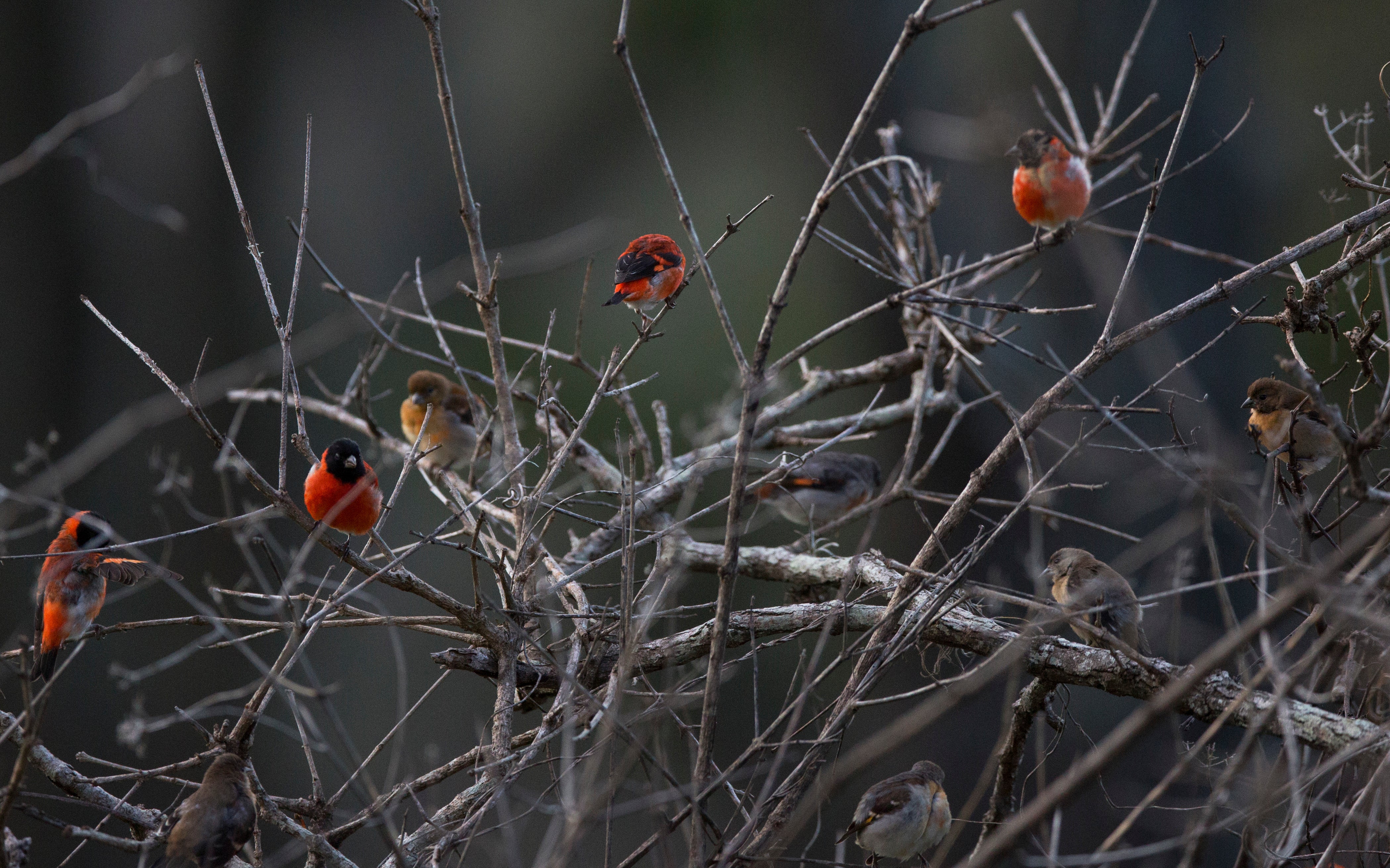 In this Oct. 23, 2018 photo, Venezuelan red siskin perch on branches in Vargas, Venezuela. Some 40 farmers in the rugged, coastal mountains of Carayaca, northwest of the capital Caracas, have stopped cutting down trees _ an important first step to creating a robust habitat for the threatened bird to thrive and repopulate.(AP Photo/Fernando Llano)

CARAYACA, Venezuela — Images of a tiny red bird that barely fills the palm of one’s hand appear everywhere in Venezuela — printed on money, labels of craft beer bottles and the cover of children’s school books.

But the finch-like red siskin is vanishing from the wild at an alarming rate, falling prey to a century of shrinking forests and poachers cashing in on their brilliant red feathers, prized around the world by breeders of exotic birds.

That threat has brought together an international team including scientists from the Smithsonian Institution in Washington and poor coffee farmers in Venezuela’s remote mountains, all set on rescuing it from extinction. The plan is to entice farmers to plant organic coffee groves with layers of thick branches that are inviting to the endangered, perching songbird, which has lost a lot of its habitat.

“They don’t have many years left, unless we do something right now,” said Miguel Arvelo, a veterinarian for the Caracas-based nonprofit Provita, one of the groups spearheading the effort.

The “Cardenalito,” or “Little Cardinal” as it is affectionately called, holds a special place in Venezuelan culture, the poster child of some 1,400 bird species — from the Amazon to the Andes — that live in one of the world’s most biodiverse landscapes.

Once flourishing in the millions, as few as 300 remain in the wild in Venezuela, although scientists say it’s difficult to estimate their numbers in the politically turbulent and dangerous country.

The Red Siskin Initiative launched about three years ago on a shoestring budget of less than $100,000 from the U.S. Fish and Wildlife Service and private groups in the U.S. and Venezuela.

Planting organic groves with thick branches reverses a trend among farmers who boost bean production by thinning coffee groves for more sunlight, or cut them down altogether to plant vegetables that turn a quicker profit.

Farmers who meet the project’s strict standards will win the right to market their beans with “Bird Friendly” labels and take advantage of a loophole in Venezuelan law to set prices for premium products, sometimes five times higher than price caps set by the socialist government. Eventually they hope to export the coffee.

In parallel, a red siskin breeding center is being built at a private zoo in Venezuela where 200 birds are expected to be hatched next year, adding to the 25 caged at the Smithsonian Institution, forming a type of Noah’s Ark to ensure that the iconic species does not disappear. Red siskins from the center will be introduced into the coffee groves.

While still in its early stages, backers say coffee initiative is already showing positive results. Some 40 farmers in the rugged, coastal mountains of Carayaca, northwest of the capital Caracas, have already stopped cutting down trees — an important first step to creating a robust habitat.

The tiny bird is prized for its fiery red plumage and jet-black hood on males, coveted by breeders who cross them with less colorful canaries to produce offspring of orange or red spots.

Protection under Venezuelan law dating back to the 1940s hasn’t stopped poachers from catching it to sell on the international black market. Online they fetch a high price and demand remains strong in Eastern Europe and Asia, scientists say.

The oil-rich nation was for decades a coveted destination for naturalists and amateur birders. But recently a field researcher in a remote mountain range was robbed of his binoculars and then shot at by two young men on a motorcycle, Braun said. At least one key member of their research team joined a growing exodus of Venezuelans fleeing the country.

“Every time I tell somebody we have an endangered bird project in Venezuela, they say, ‘Oh, Venezuela? Good luck,'” Braun said. “It’s a challenge.”

The red siskin’s primary range is the Caribbean coastal region of Venezuela, and some have been found in neighboring areas of Colombia and Guyana.

Scientists carefully conceal the bird’s location to protect them from poachers, but they allowed The Associated Press to photograph a small flock at a secret location in their natural habitat.

Catching sight of them required arriving before dawn, hiding motionless and silently in tall grass thick with mosquitoes under pouring rain. Then, the sun broke through and they swooped in — a dozen or more — landing one by one on tangled tree branches overhead, preening and loudly singing.

“It’s the first time I’ve seen so many together,” said an emotion-filled Miranda. “It gives us hope.”

In Carayaca, Simon Then, a 53-year-old blue-eyed, blond farmer — descended from early German settlers — walks through his family’s coffee grove surrounded by dozens of leafy, 5-foot-high shrubs nestled on a steep slope. His eyes fill with emotion showing off the red cherries starting to appear without the use of chemicals.

No red siskins make this mountainside home yet, but Then envisions the terrain covered in dense forest one day as he and his neighbors join in the effort to restore the endangered bird.

“It’s more work,” he said about the challenges of organic farming, “but it gives us more money.” /muf