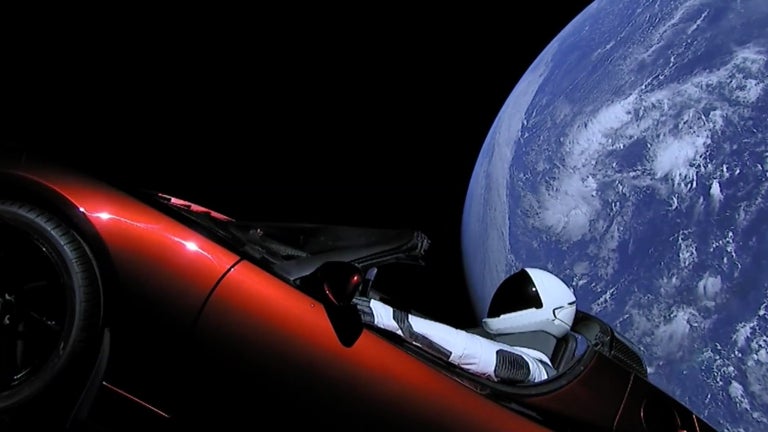 SpaceX launched the Tesla Roadster and its inanimate passenger, Starman, into space as the payload on the Falcon Heavy rocket’s first voyage in February 2018. Image: SpaceX/Youtube via AFP Relaxnews

On Friday, SpaceX announced that Starman, the Tesla space Roadster’s makeshift pilot, has officially passed Mars’ orbit. The car is expected to reach its far point this Thursday.

In February, Elon Musk’s SpaceX launched a Tesla Roadster car manned by Starman, a mannequin in an astronaut suit, into the sky. Nine months later, the sports car passed Mars’ orbit as SpaceX tweeted on Friday.

Starman’s current location. Next stop, the restaurant at the end of the universe. pic.twitter.com/Ty5m8IjJpE

BUY: ‘Elon Musk: Tesla, SpaceX, and the Quest for a Fantastic Future’ by Ashlee Vance

The Roadster is right on schedule to reach its farthest point this Thursday at 155 million miles (249 million kilometers) from the sun, according to Ben Pearson’s model on Where Is Roadster?, a website tracking the Roadster’s journey.

On Nov. 8, Starman will be at its maximum distance from the sun, after which its orbit will marginally shrink over hundreds of years.

According to Pearson, the car will reach its farthest point from Earth this coming February but will return for a close approach in November of 2020, at which time it will be just 32 million miles (51 million km) away from us.

As of today, nearly nine months since the launch, Starman has exceeded its 36,000-mile (57,900 kilometers) warranty over 10 thousand times by traveling a distance equivalent to 16.4 times the combined length of every road on Earth. At 34,597 miles per hour (55,678 kilometers per hour), this is definitely the fastest roadster the Earth, and the solar system, has ever seen. JB