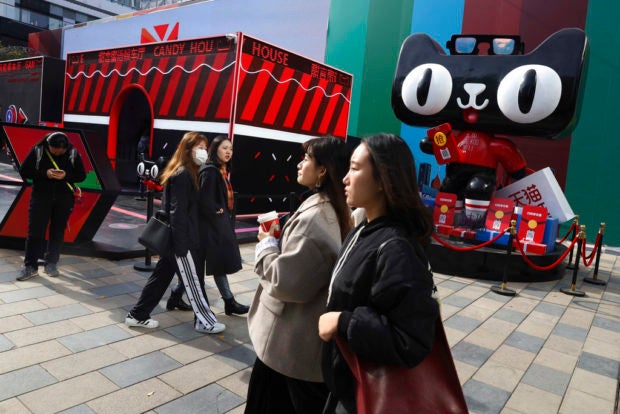 Shoppers walk by a promotion by Alibaba’s Tmall online shopping platform for the upcoming 10th Singles Day event in Beijing, China, Wednesday, Nov. 7, 2018. What begun in the 90s by Chinese college students as a version of Valentine’s Day for people without romantic partners to splurge on themselves, the day of sales promotion has grown into the world’s biggest e-commerce event. (AP Photo/Ng Han Guan)

FRANKFURT — A European Central Bank (ECB) survey suggested that digital technologies sweeping through the corporate world mean some loss of jobs at big companies while bringing stronger sales and productivity.

But a key question for policymakers — what the digital revolution means for inflation — was harder to answer. Retailers told them e-commerce should lower prices to consumers, while goods producers foresaw more chance to raise prices thanks to new technologies such as 3D printing and internet-connected devices.

The ECB surveyed 74 of the biggest global companies in Europe about the impact in the coming years from digitalization to find out how the new technologies were affecting the economy.

On balance, companies saw digitalization having a “small negative impact” on jobs, while shifting labor needs from low-skilled to high-skill employees.  /kga