‘Cyber cleaners’ in PH: A dirty job, but someone’s got to do it 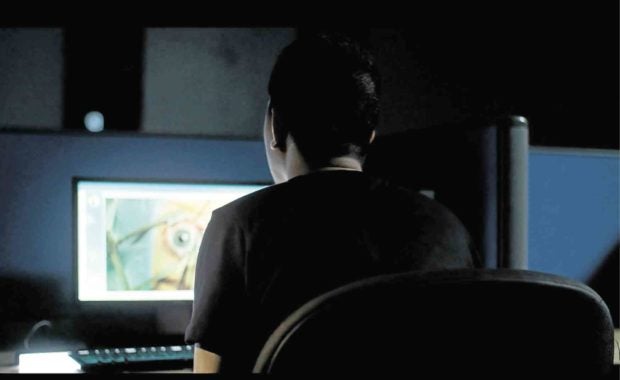 DISTURBING Filipino “content moderators” scan the internet to remove deeply disturbing images and videos on Facebook and Google from their offices in Metro Manila. —SCREEN GRAB FROM “THE CLEANERS”

If you had uploaded a very upsetting image or video on YouTube or Facebook, say the gory aftermath of a homicidal rampage or accident, and one day you could no longer find it, chances are it was taken down by “cleaners” who most likely are Filipinos, according to a documentary film by a German group.

Thousands of Filipino cleaners with the more glamorous title of “content moderators” work secretly inside skyscrapers in a business district in Metro Manila where they sit in front of large computer monitors, combing the vastness of cyberspace in a virtual search-and-destroy mission to expunge deeply disturbing images and videos.

According to the documentary, “The Cleaners,” Filipino moderators erase around 25,000 such materials uploaded daily — from Islamic State beheading videos to human genitalia, child abuse, pornography and political chaos — out of 500,000 videos or 2.5 million Facebook posts from over 3 billion global internet users.

The 90-minute documentary film by multimedia creators Hans Block and Moritz Riesewieck of the German company Gebrueder Beetz FilmProduktion, tells the story of the content scavengers of the digital world who do their job following the community guidelines of US social media platforms.

The German crew spent almost a month in the Philippines for research and interviews.

Block and Riesewieck found that the main hub of this new industry, which is manned by around 10,000 people mostly from the Third World, was Metro Manila where labor is cheap and a huge chunk of the population is wired to the internet.

The industry is funded by Facebook and Google, which had admitted outsourcing to third parties the digital cleaning, or deleting, of inappropriate content.

The Filipino cleaners work for giant tech companies but are not their direct employees. They must sign iron-clad nondisclosure contracts to get the job to “delete or ignore” any content deemed offensive.

After its global premiere at the Sundance Film Festival in January, the filmmakers decided to bring the documentary to the Philippines through an exclusive screening for students, journalists and cyberexperts on Friday at the University of the Philippines Cine Adarna.

Artist Illma Gore, whose controversial rendering of a naked Donald Trump was taken down by a moderator in 2016, warned in the film that this practice could be a form of censorship of artistic expression.

Without directly addressing the Trump image takedown, one of the five Filipino moderators interviewed said: “Our goal is to make the platform as healthy as possible. Someone needs to guard it just like the real world.”

Although a cleaner does his job anonymously partly to avoid reprisals, it nevertheless takes a personal toll.

Each post that he deletes or ignores also unnerves him until the experience accumulates into a serious psychological trauma that, in at least one instance, had a fatal consequence.

One Filipino male moderator, whose request to be reassigned from monitoring live self-harm videos on Facebook was refused, took his own life in front of his computer at work.

A female moderator said cleaners had to do a “difficult, dirty job” to survive in a poor country like the Philippines.

“My parents always tell me, ‘Study well, aim for a job so you won’t end up cleaning (another person’s) garbage. Your job is to make people around the world think that it’s safe online, but your job is not safe for you,” she said.

A third moderator, an avowed supporter of President Duterte, appeared comfortable with his job and echoed sentiments of the President in defending his war on drugs.

“How Duterte is making the Philippines safe, that’s what I’ve been doing in my job,” he said.

“Being a content moderator,” the cleaner said, “is like being a sniper—targeting users who are breaking rules of the application.”

The film showed him going over photos of victims of extrajudicial killings and drug-related violence at work and partying later in the night with the Duterte Diehard Supporters in a Mocha Girls show.

According to local production company Blender Media, which provided logistic assistance in the Philippines for the documentary, offering services to foreign filmmakers was nothing new to it, but “the scope and complexity of ‘The Cleaners’ caught us by surprise.”

That Filipinos provided the majority of the sweatshop-like labor force for cleaning cyberspace was not surprising.

Statistics from the 2018 Digital Report of We Are Social showed that around 69 million Filipinos have access to the internet, 97 percent or 67 million of whom are active Facebook users.

The Philippines also tops the global list of the average number of hours that social media users spend each day on any device—3 hours and 57 minutes.

In the film, David Kaye, UN special rapporteur on the promotion and protection of the right to freedom of opinion and expression, said there is danger in hiring third-party outsourcing companies—with most having little to no historical grounding on issues—to moderate content of the principals.

Facebook’s top lawyer, Colin Stretch, admitted in a US Senate investigation that his company hired around 10,000 people to moderate content and security, while Google said it hired “thousands of people outside the company.”

Block and Riesewieck said they reached out to the executives of the major tech companies involved in the cleanup but they refused to be interviewed.