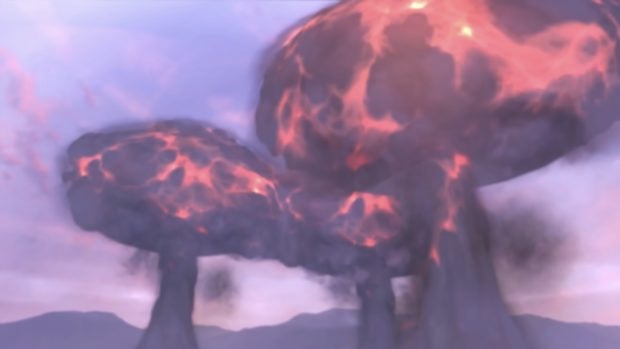 A group of “Fallout 76” players got together on a rooftop to watch three nukes drop. They didn’t think they would actually crash the online game’s server.

Gamer “Nickaroo93” and his buddies hypothesized that their little in-game stunt might crash the game server, but they went for it anyway just to be sure. Footage was uploaded on Nickaroo93’s YouTube channel on Nov. 17.

Why would launching three nukes and have them fall at the same location crash the game server? It may come from the immense load of generating numerous game conditions that come from a nuke being detonated.

“Fallout 76’s” nuke system can be equated to an instance level in other games; a special stage with stronger monsters and better completed with a group of other players. A nuked area will create more powerful mutated monsters to defeat and would also drop rare items for players to pick up. One nuke does that. Three nukes in one area may have overloaded the game’s system with the sheer amount of information it was handling at the moment and therefore crashed.

“We nuked the server,” said one of players over voice chat as the group was disconnected and led back to the log in screen.

Nickaroo93 elaborated on how their curiosity for the game’s nuke mechanic led them to launch three nuclear bombs in one area.

Something worth noting is that nuke launch codes are apparently not as easy to come by within the game. Players have to collect multiple randomly spawned codes then decipher them before a nuke can even leave a silo. It’s a proportionate amount of effort for one of the game’s highlights.

However, some high-level players, like Nickaroo93 and his crew, hoarded codes and now have a nuclear arsenal at their finger tips.

Some less discerning players launch nukes at the game’s beginner area which has turned into a headache for new players.

As for Nickaroo93’s group, they plan to be more responsible and claim they’re only studying how the nukes can affect the game. Their next experiment will involve firing all three nukes again but this time have them land at different areas. Nickaroo93 said, “The idea of exploring three different irradiated areas sounds amazing, and we hope it’s possible.”

“Fallout 76” is an online multiplayer game based on the “Fallout” game franchise. The game universe is set in a post-apocalyptic America ravaged by nuclear war decades before. Despite the fallout, survivors emerge from underground shelters called Vaults. These survivors then discover and explore a new landscape changed by radiation where they meet fellow survivors and mutated monstrosities.  Alfred Bayle /ra