The government of Camarines Norte province has organized an e-sports tournament centered around the popular online game “Defense of the Ancients 2,” with a prize money of P100,000.

The event, dubbed “DOTA Kontra Droga,” was organized through the collaborative effort of the provincial government, the Provincial Sports Office and the Provincial Youth Affairs Office.

Registration for the 5 vs. 5 and 1 vs. 1 portions of the “DOTA 2” tournament has already begun and will end on Nov. 25. The tournament proper will run from Dec. 14 to 16 at the Agro Sports Center in Daet, Camarines Norte.

Apart from the gaming tournament, the event will feature a cosplay show and a jobs fair for those seeking employment. 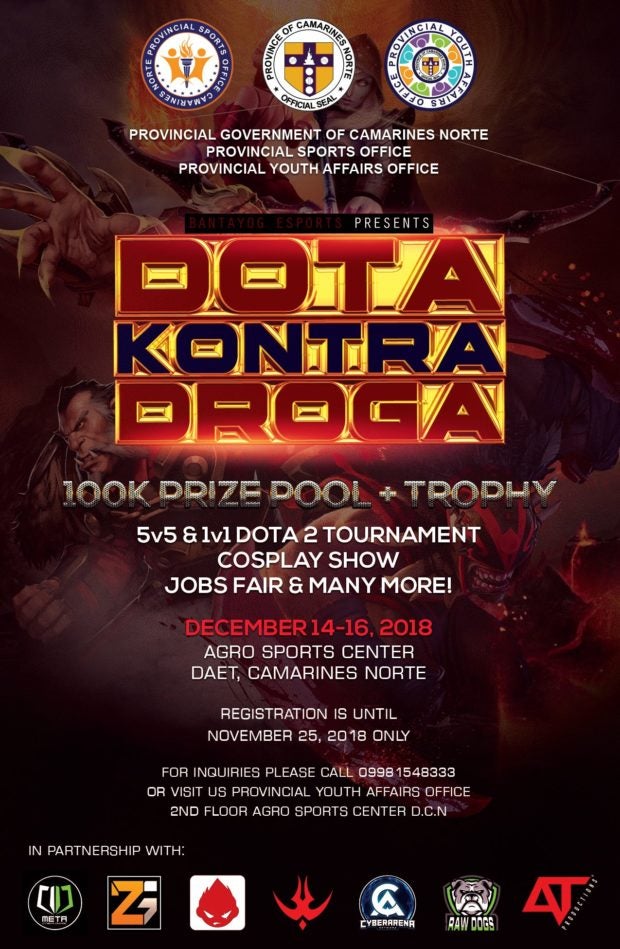 Gino L. Villafranca, Camarines Norte provincial youth affairs officer and provincial sports coordinator, noted that the aim of the event is to promote the idea of gaming to parents, local e-sports gamers and computer shop owners.

From the perspective of Villafranca and Provincial Administrator Alvin Jerome Tallado, e-sports is not so different from traditional sporting events. According to Villafranca, e-sports also promotes the idea of camaraderie among players. Tournaments can serve as venues for people with similar interests to develop a “sense of sportsmanship through teamwork and fair competition.”

With e-sports’ similarity to traditional sports, it can also be similarly used as a weapon against addiction. Video games can help connect a community of people while also keeping in touch with technological developments.

At the same time, the team behind the event also recognizes that video games can also be addicting. Hence, the focus on developing responsible gaming habits where gamers are still able to connect with the wider world beyond video games.

E-sports is currently on the rise in the Philippines. A good indicator of this trend is the annual Electronic Sports and Gaming Summit (ESGS), which was last held on Oct. 26 and 28. The video gaming event has steadily grown over the years since 2014. This year’s event had over 24,000 attendees and showcased various gaming tournaments, independent video game projects from students of local universities and developers, and artists who create art based on popular game characters. There were also displays for gaming and computing hardware. Another indicator is the fame that Philippine teams have earned while competing in various international competitions.

With the undeniable arrival of e-sports in the Philippines, local events such as “DOTA Kontra Droga” may be seen as a sign of good change for the video gaming community. Video gaming is no longer seen as a waste of time but as something that can build communities and help individuals be better people.  /ra