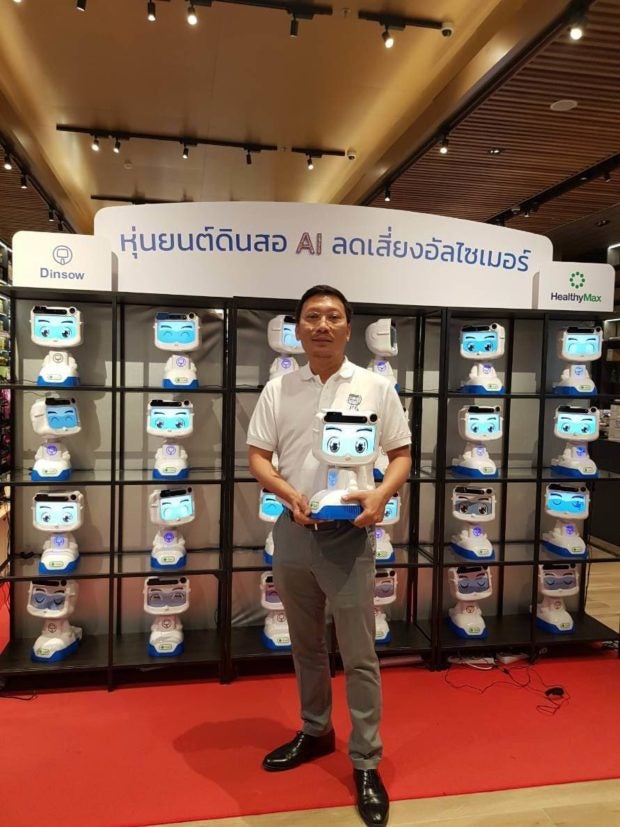 BANGKOK — CT Robotics has launched its latest version of a Thai-made-and-designed robot, “Dinsow Mini 2”, which is embedded with artificial intelligence and is designed to be a companion for the elderly, especially those with Alzheimer’s.

Chalermpon Punnotok, the chief executive officer of CT Robotics, said that this was the first time the company had developed a robot for the mass market, aimed at people suffering from Alzheimer’s.

Currently, there are around 600,000 people suffering from Alzheimer’s in Thailand with the possibility of the numbers increasing rapidly as Thailand becomes an ageing society.

The company sees the opportunity to deliver AI robots as company for these people.

Dinsow Mini 2 is designed with embedded voice recognition, voice command and face recognition and also AI features that allow the robot to learn more about the elderly person’s voice, face, behavior and lifestyle.

Dinsow Mini 2 also encourages the elderly to do brain exercise.

He said the company aims to sell 5,000 Dinsow Mini 2 within the next 12 months in four markets – Thailand, Japan, South Korea, and Hong Kong.

The company has local partners in each market. In Thailand, it now partners three retail drug-chain stores – Healthymax, PharMax, SafeDrug.

Dinsow Mini 2 comes with cellular capability and Wi-Fi connection as well as camera, speaker, and touch-screen monitor to facilitate the elderly to instantly communicate with their family.

“The elderly will be in the eyes of their family at all times as Dinsow Mini 2, as their companion, will immediately alert and contact the family if any urgent incident occurs, especially if there is a difference in the face or unusual behavior,” said Chalermpon.

The company will consider bringing Dinsow Mini 2 to the mass market for consumers in the future.

Chalermpon said Dinsow Mini 2 is the latest version of Dinsow Mini, which has been used in almost 20 hospitals in Thailand, including Siriraj Hospital and Chulalongkorn Hospital.

We plan to launch the next version with the application protocol interface to third party to develop added features,” said Chalermpon.

Apart from Dinsow Mini, the company has also developed a service robot called Dinsow, which is bigger than Dinsow Mini. Three versions of Dinsow are available in the market.

Dinsow Mini 2 will be sold at a special price of Bt65,000 instead of the normal price of Bt85,000 on the occasion of Father’s Day.