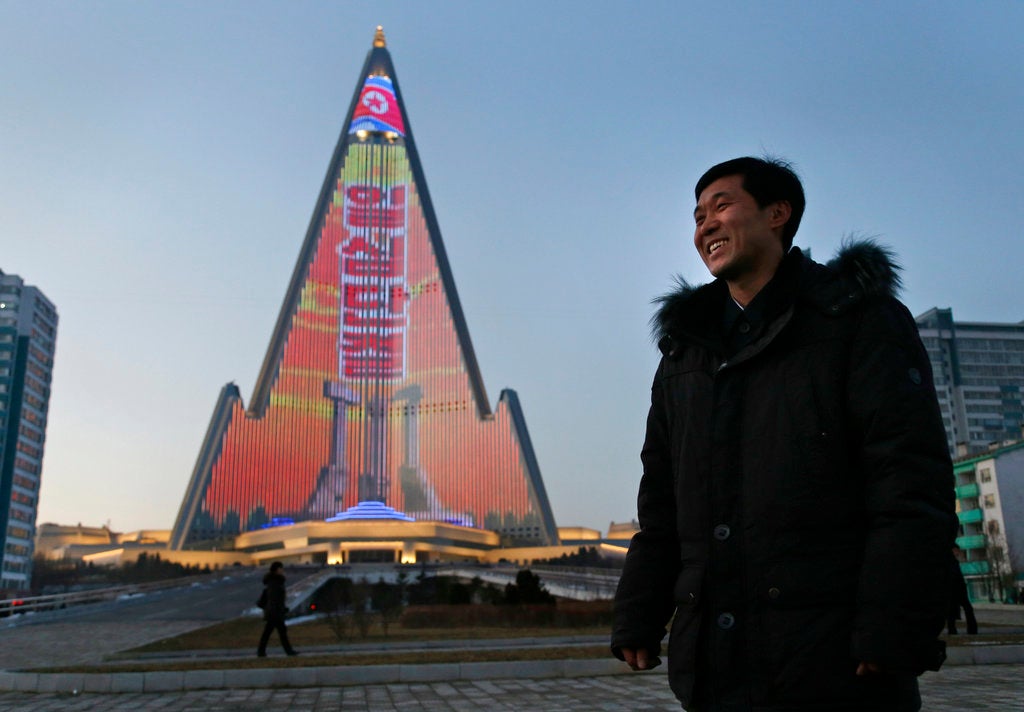 In this Dec. 20, 2018 photo, light designer Kim Yong Il smiles during an interview with the Associated Press as his creation, the light show displaying propaganda messages on the facade of the pyramid-shaped Ryugyong Hotel, is seen in the background in Pyongyang, North Korea. For several hours each night, the building that doesn’t have electricity inside becomes the backdrop of a massive light show in which more than 100,000 LEDs flash images of famous statues and monuments, bursts of fireworks, party symbols and political slogans. (AP Photo/Dita Alangkara)

PYONGYANG, North Korea  — The 105-story Ryugyong Hotel has long been a blot on the Pyongyang skyline. The world’s tallest unoccupied building has towered over North Korea’s capital since 1987, a grand but empty pyramid entirely dark except for the lone aircraft warning light at its top.

Outsiders saw the unfinished building as the epitome of failure, while people inside the country took care to rarely mention it at all.

That is, until light designer Kim Yong Il made the building once again the talk of the town.

In a brilliant flip of the script, the Ryugyong has been reborn as a symbol of pride and North Korean ingenuity.

For several hours each night, the building that doesn’t have electricity inside becomes the backdrop of a massive light show in which more than 100,000 LEDs flash images of famous statues and monuments, bursts of fireworks, party symbols and political slogans.

The Ryugyong is still unfinished. There’s no public date when, or if, it will host its elusive first guest. Questions remain over whether the glass-and-concrete hotel is structurally sound. And North Korea’s electricity supply is limited as-is.

But never mind all that.

“I feel really proud,” Kim, the vice department director of the Korean Light Decoration Center, told The Associated Press in a recent interview at the foot of the hotel. “I made this magnificent design for this gigantic building and when people see it, it makes them feel good. It makes me proud to work as a designer.”

The display was first lit in April to mark the birthday of the country’s “eternal president,” Kim Il Sung.

Designer Kim said the preparations took about five months. He was in charge of the designing and programming the light display, which took him two months. Another specialist was responsible for the physical setup and electrical wiring.

Giant LED displays has been used around the world for many years — and on an even bigger building. Japanese designer Yusuke Murakami and a London-based company collaborated in 2016 on an LED animation on Dubai’s Burj Khalifa, the world’s largest tower.

The 330-meter (1,083-feet) Ryugyong tower has three distinct sides. The main show is displayed on the front, while simpler designs light up the other two. For a conical section at the very top, Kim created the image of the red, white and blue North Korean flag waving in the wind. It is 40 meters tall and visible from any direction.

The four-minute main program begins with an animation showing the history of the nation, followed by homages to ideals like self-reliance and revolutionary spirit and a procession of 17 political slogans such as “single-minded unity,” ”harmonious whole” and “100 battles, 100 victories.”

The lights are connected to a computerized controlling system about the size of a household DVD player.

“The whole program can be stored on an SD card and put into the controller,” Kim said. “We can do the diagnostics on a laptop.”

He ordered it built as part Pyongyang’s preparations for the 13th World Festival of Youth and Students, which it hosted in 1989 as a kind of counterpoint to the 1988 Seoul Olympics. The Ryugyong was supposed to be the world’s tallest hotel, surpassing another in Singapore that was built by a South Korean company, but the building fell by the wayside as North Korea experienced a severe economic crash and famines in the 1990s after the fall of the Soviet Union.

It languished in limbo until Egypt’s Orascom Group, which established the North’s cellphone system, helped fund the completion of its glassy exterior in 2011.

Like his father, Kim Jong Un has a penchant for ambitious building projects, including 82- and 70-story residences in the capital’s “Ryomyong,” or “dawn,” district that opened last year and a massive science and technology complex with a main building shaped like a giant atom.

“The goal of setting up this light screen is to give confidence and hope for the future to our people,” Kim, the designer, said as he watched people walking by in the light of his massive display. “The response has been great. The national flag at the top of the building is hundreds of meters high and everyone can see it. It fills them with pride and confidence in being a citizen, willing to work very hard.”

He declined to guess when the hotel itself might open.

“That’s not my field,” he laughed.

But he said there’s no plan to turn off the Ryugyong light show, though updates could be in the works.

“We could change the content,” he said. “The demands and aspirations of the people and the times change, so we can change the program to reflect that.”  /muf